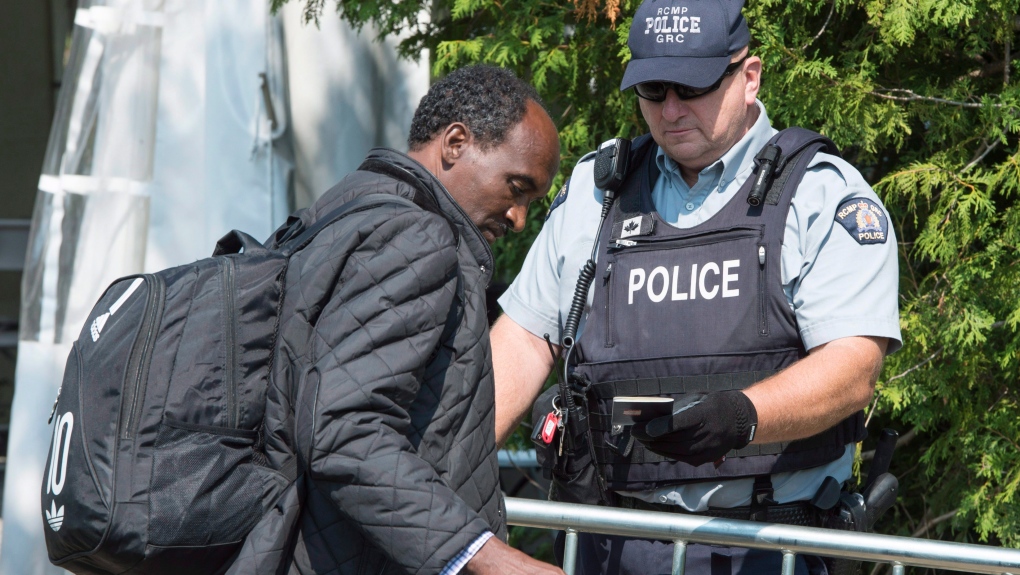 An asylum seeker, claiming to be from Eritrea, shows his passport to an RCMP officer as crosses the border into Canada from the United States Monday, August 21, 2017 near Champlain, N.Y. (Paul Chiasson / THE CANADIAN PRESS)

OTTAWA -- Canadian immigration officials have determined that the United States remains a safe country for asylum seekers, despite the Trump administration's crackdown on what it terms illegal aliens.

Documents obtained by The Canadian Press under access-to-information law show Canada was concerned about the changes in U.S. immigration policy and conducted a review of its Safe Third Country agreement with the U.S. from January to March of 2017.

The review came after U.S. President Donald Trump issued a number of executive orders on immigration, including one aimed at beefing up border security to "end the abuse of parole and asylum provisions" that delay and complicate the removal of undocumented migrants to the U.S.

Canada's analyses of these U.S. policies were redacted from the documents. However, the overall conclusion reached by Canadian officials was that the United States "continues to meet the requirements for designation as a safe third country."

The Safe Third Country agreement between Canada and the U.S. is based on the core principle that people seeking refugee protection must file their claim in the first safe country they arrive in, unless they qualify for one of a few exceptions.

The other core tenet is that Canada considers the United States a safe country for refugees. So, if an asylum seeker comes to Canada at an official border crossing from the U.S. and tries to claim refugee protection, they will be refused entry and encouraged to make their claim in the U.S. -- the "safe country" from which they just came.

The requirements for designating a country as safe are threefold: each country must comply with the United Nations convention against torture and the UN convention on refugees and it must maintain a good human rights record.

Internal government documents show that in 2015, Canada moved to ensure ongoing monitoring of its designation of the United States as a safe country. Any developments in the U.S. that could hurt its ability to meet this designation, notably any changes to policy or practices that could "significantly weaken asylum protections provided by the United States and its human rights record," are regularly monitored, according to a briefing note prepared for Immigration Minister Ahmed Hussen in March 2017.

Just one month after completing one of those regular reviews in December 2016, immigration officials undertook another in the wake of Trump's 2017 executive orders and new guidelines that were issued to U.S. border officials on how to handle asylum seekers.

As part of this review, detailed policy directive memos from then-U.S. secretary of Homeland Security John Kelly were examined.

The memos, which were sent to the heads of all U.S. agencies that deal with immigration and border security, detail strict and heavy-handed enforcement measures that were to be unleashed against asylum seekers in the U.S., including automatic detention of migrants -- whom Kelly refers to as "aliens" and "illegal aliens" -- pending a final determination of whether they would be ordered for removal.

Other measures outlined in Kelly's directive included: a surge in deployment of immigration judges and asylum officers to hasten adjudication of claims; expedited removal processes and greater scrutiny of those who claim fear of persecution if they are returned to their home countries.

U.S. Homeland Security also suspended privacy rights for non-U.S. citizens and unlawful residents and ordered that more data on migrants be released to the public, including a requirement to publish the number of "apprehended aliens" that are convicted criminals or gang members and the nature of their offences.

Canada reviewed these memos and Immigration deputy minister Marta Morgan provided an analysis to Hussen. Details were redacted from the documents released to The Canadian Press.

Ultimately, Canada's 2017 review concluded that the U.S. continued to meet the necessary requirements to be designated a safe third country.

The Canadian government has faced mounting pressure to suspend the agreement in recent months -- calls that escalated over the summer amid concerns about child migrants in the U.S. being separated from their parents and held in detention facilities.

Trump ultimately reversed that policy, but it remains unclear whether ongoing developments in the U.S. have prompted any further internal reviews of the Safe Third Country agreement.

In response to requests for comment, the Immigration Department says it has "carefully analyzed recent developments in the United States, including the executive orders related to immigration and refugee matters, and continues to consider the United States a safe country for asylum claimants to seek protection there.

"Details of assessments are not shared in consideration of our bilateral relationship and the ongoing nature of our analysis," department spokesperson Beatrice Fenelon added.

Meanwhile, internal emails also obtained through the Access to Information Act show immigration officials have continued to raise concerns about the agreement and are closely measuring public perceptions about Canada's irregular migrant influx.

In April of this year, following a 466-per-cent increase in irregular migrants crossing irregularly into Canada over the Easter weekend compared to the same period in 2017, immigration officials began deep-diving into statistics to determine why this was happening and examining how they should publicly respond.

One internal memo pointed to the Safe Third Country agreement as a key culprit, noting the agreement only applies at official border entry points, which is "creating an incentive for migrants to cross our border illegally between ports of entry."

"In 2017 Canada intercepted 21,000 migrants who crossed illegally into Canada at the Canada-U.S. land border. This trend continues in 2018 and is a significant concern for the integrity of our shared border," the internal memo states.

Sections of this document were redacted, but it does say the agreement is "antiquated" and that "there is additional and important work that needs to be done to ensure there continues to be orderly migration within the North American perimeter."