Canadians from coast to coast to coast and around the world enjoyed a mid-week Canada Day celebration, and one of the biggest parties ended with a colourful bang in the nation’s capital.

After an afternoon of musical performances that led well into the evening Tuesday, a fireworks show lit up Parliament Hill in Ottawa. According to the government’s website, more than 1,100 aerial shells were fired.

The show capped a full day of festivities. Thousands of people had already gathered on the Hill by mid-morning Tuesday, ready to take in a concert headlined by Serena Ryder and Marianas Trench, among others. Multiple Olympic medallist Clara Hughes also wrapped up her cross-Canada bike ride for mental health awareness at the event.

By early afternoon, Ottawa police had estimated the crowd’s size to be about 25,000.

Many held up umbrellas to shade themselves from the bright sun as the humidex registered 38 Celsius. But those umbrellas later offered protection against the rain, as the city remained under a severe thunderstorm watch into the afternoon. A tornado warning that had been issued shortly after 2 p.m. local time was lifted not long after.

Prime Minister Stephen Harper and his wife, Laureen, and Gov.-Gen. David Johnston and his wife, Sharon, arrived on Parliament Hill around noon to kick off the official program.

In a flypast, Canada’s famed aerobatic team, the Snowbirds, trailed red smoke behind them for the first time in two decades. Former astronaut Chris Hadfield was in the lead plane.

“Very proud to fly the flag high today,” he tweeted with a mid-flight photo.

The British Columbia Boys Choir sang ‘O, Canada’ and ‘God Save the Queen,’ before the afternoon’s concert got underway.

Those looking for a more participatory experience were invited to join a swing dance lesson on Parliament Hill’s East Lawn, while others could take in a photo exhibit marking Canada’s military mission in Afghanistan.

In a statement, Harper recalled “what makes our Canada the best country in the world.”

“It’s the moms and dads who pass on to their children Canadian values: working hard, doing what’s right, and determination to be our best,” he said.

He also hailed Canadians’ successes at the Winter Olympics and Paralympics, and the hard work and sacrifice of members of the Canadian Forces.

“Let their legacy in service of Canada inspire us to work harder than ever to continue to build our true North, strong and free,” Harper said.

“On behalf of the Government of Canada and from my family to yours, happy Canada Day everyone.”

Opposition Leader Thomas Mulcair said Canada Day is an opportunity to honour the country’s history as well as look to the future.

“Canada is a great country and one of the hopes of the world. We are lucky to live in such an open, welcoming, and diverse place,” Mulcair said in a statement.

“We have much to be proud and by working together, we can build a fairer, more prosperous country for all.”

Liberal Leader Justin Trudeau hailed Canada’s diversity, while noting that people join together on this holiday to “celebrate our shared Canadian identity.

“Canada is a country where innovation and creativity flourish, where diversity is celebrated and rightly identified as our source of strength, and where citizens are united by common values like democracy, freedom, compassion, and equality,” Trudeau said.

Gov.-Gen. David Johnston picked up on that theme in his own address to Canadians, challenging them to think about what they can do to make the country better over the next three years, before this country’s 150th birthday.

“Now is the time to decide who we want to be on that auspicious day,” Johnston said, urging Canadians to “discover what you have to give, and how you can contribute to the future.”

Flag flies around the world

Canadians around the world were not to be left out of the festivities. In London, Canada’s High Commissioner Gordon Campbell tweeted a photo of himself in front of Westminster Abbey, where the Maple Leaf was flying overhead.

In New York, the Canadian embassy tweeted that the Empire State Building will be lit up in red and white “in hono(u)r of #CanadaDay!”

In Washington, a party at the Canadian Embassy included a pancake breakfast, reported CTV’s Joy Malbon.

“The United States and Canada share a long and productive history and a common democratic heritage. Americans are proud to share not just borders, but values with the great nation of Canada,” Kerry said in a statement.

“As you gather with friends and family, the United States joins you in celebrating the birth of your nation. I wish you all a happy Canada Day.” 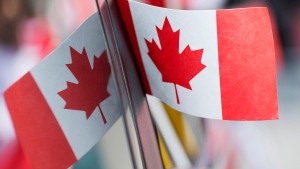