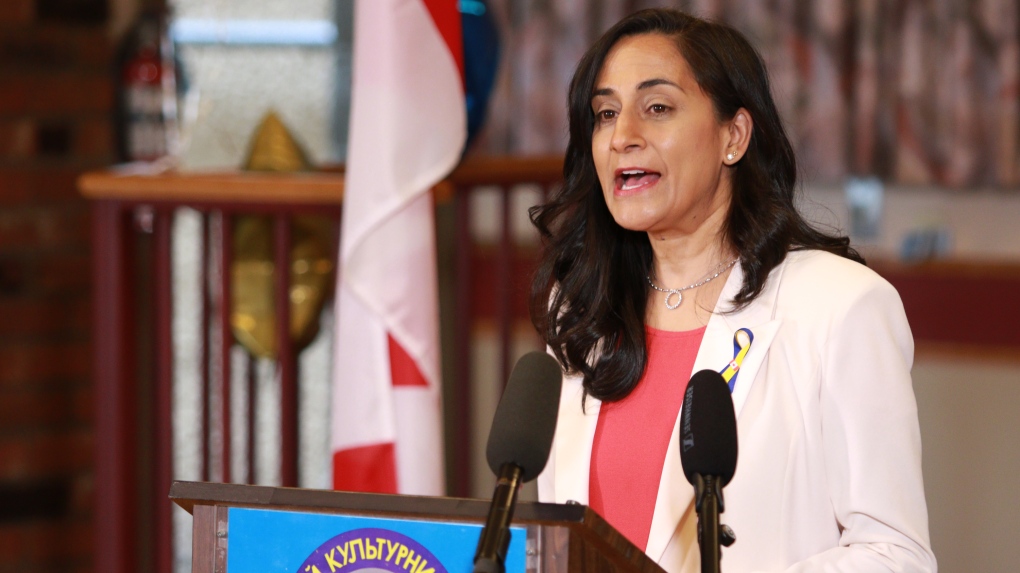 Minister of National Defence Anita Anand makes an announcement in support of Ukraine during a press conference at the Ukrainian Cultural Centre in Victoria, B.C., on Tuesday, May 24, 2022. THE CANADIAN PRESS/Chad Hipolito
OTTAWA -

Canada's defence minister says the federal government has more to do to support military members who are struggling to find housing.

The government put in place several measures to give military members more flexibility in their work, including remote work options, Anand said.

She added that the government increased the rates of pay for military members in 2021.

“We have more work to do in this area,” she said. “We will continue to support military members and their families.”

Canadians across the country are facing housing shortages, noted Anand.

The email was sent by a senior officer at 19 Wing Comox to other members at the Royal Canadian Air Force base on northern Vancouver Island, which is home to the military's search-and-rescue school as well as several squadrons of aircraft.

“Further to our discussion this morning, one potential housing option for our folks is Habitat for Humanity,” said the email dated May 5. “Should this be of interest to any of your personnel, please have them review the information located here.”

Defence Department spokeswoman Jessica Lamirande said members were not being directed to Habitat for Humanity, but rather that it was being presented as an option to those having “significant difficulty” finding housing.

Chief of the defence staff Gen. Wayne Eyre warned last month that his troops were feeling the bite of escalating housing prices and other costs of living as a result of their unique lifestyles, which include constant moves throughout their careers.

At the same time, Eyre lamented a shortage of military housing, saying: “Now we're somewhere in the neighbourhood of 4,000 to 6,000 units short on our bases, which is also accentuating the housing problem.”

Many bases have military housing. But even as internal Defence Department assessments have repeatedly asserted since 2017 that at least 5,000 more units are needed to meet the military's growing requirements, the number of homes owned by government has steadily decreased for years.

As the pandemic keeps people indoors, children and youth are turning to video games at an alarming rate. Sometimes with grave consequences. W5 investigates how much is too much?