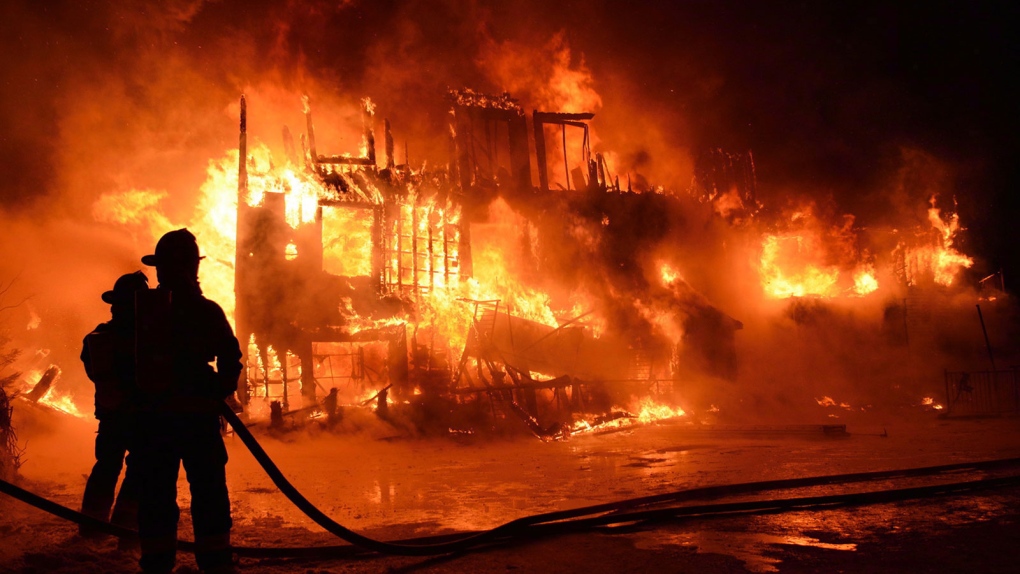 MONTREAL -- A deep chill that recently fell over Quebec left Yves Desjardins uneasy as his thoughts turned to the tragic blaze one year ago that swept through a seniors' home, killing 32 people.

The winds and chilly temperatures were reminiscent of the conditions that helped fuel the fire in L'Isle-Verte in January 2014 and served as a reminder to Desjardins that more needs to be done.

"We have to act, we can't wait any longer," said Desjardins, president of the Quebec association for elder-care facilities.

"It was extremely cold one morning and I have a fearful feeling on these days, when major fires often break out. It brings back a lot of scary memories."

The blaze broke out just after midnight last Jan. 23, engulfing the older, three-storey wooden structure built in 1997 that had no sprinkler system. The inferno was fuelled by strong winds on what was a blisteringly cold night.

Many occupants of the part of the residence that was destroyed needed wheelchairs or walkers to get around and were on medication they took at night.

A newer wing, built in 2002, had firewalls and sprinklers and was spared.

In the aftermath of the tragedy, seniors' advocate Susan Eng had expressed hope the staggering loss of life would translate into action across the country as there were immediate calls for stiffer rules and for sprinklers to be put in all buildings.

"You would think that would be enough to spur political action in the first instance and action by nursing-home operators across the country," says Eng, vice-president advocacy for CARP, a group that defends the interests of seniors.

"It is true today that in fact in every single province, there are homes that are older and are not retrofitted to grade and they should be."

With rules differing from province to province, Eng's group has embarked on a campaign calling on the ministers responsible for nursing-home safety -- at the federal, provincial and territorial level -- to make it mandatory for fire sprinklers to be installed in all buildings that house seniors.

"It's doable, it costs money and someone has to put money in there," Eng said.

"When people put their loved ones in care, the very least they can expect is they will be safe from a preventable disaster like this."

Stakeholders are also hopeful that a Quebec coroner who investigated the L'Isle-Verte tragedy will recommend that retrofitting older homes with sprinklers be a priority.

A spokeswoman for the Quebec coroner's office says Cyrille Delage's report should come later this year.

Delage, who also oversaw the inquest into a criminally set fire in 1969 at a nursing home in Quebec that claimed more than 35 lives, has said sprinklers alone will not be enough.

Testimony at the recent inquest revealed a number of shortcomings -- inadequate firefighter training, convoluted building rules, and employees who were unprepared for a middle-of-the night fire evacuation.

Under Quebec's existing rules, sprinklers are only mandatory in seniors' residences where the occupants are not mobile.

There have been subtle moves in the province since the blaze.

Desjardins noted that a committee headed by the Regie du batiment, the agency that enforces the Quebec building code, was formed to look at how to change the province's building regulations.

It recommended that sprinklers for all newly built residences and the government is currently studying the proposal.

Such a change would reflect provisions of the National Building Code of Canada, a model provinces use as a sort of blueprint. It was updated in 2010 to reflect the need to change sprinkler rules for new or renovated care facilities.

The Quebec government said in the wake of the L'Isle-Verte tragedy it could make sprinklers compulsory in all private residences, regardless of their occupants.

Desjardins says he believes change is coming. His organization has long wanted to see all rooms in seniors' residences in Quebec fitted with sprinklers.

"There might have been deaths (in L'Isle-Verte) but there would have never have been 32 deaths because it would have delayed the spread of the fire," Desjardins said.

The key issue is cost: on average, retrofitting can run between $4 and $8 per square foot, depending on access to a proper water source for the system. Desjardins said out of some 78,000 Quebec rooms, about one-half would need work done.

"The government understands some seniors' homes will close without financial assistance (for retrofitting)," Desjardins said.

"And that's where it gets complicated, because where will these seniors go? It's all well and good to have requirements, but if nobody can meet them or the facility closes, then we're no further ahead."

The sprinkler debate remains very much alive and some jurisdictions have already sprung into action.

Last October, Alberta Premier Jim Prentice announced $70 million to put more sprinklers and other fire-safety devices in seniors' facilities in that province as soon as possible.

In Alberta, roughly 455 of 657 such homes do not have sprinkler systems, with many built before they became mandatory in 1990. It's estimated that $250 million is needed to equip or upgrade them with sprinklers.

Eng acknowledges retrofitting is not a cheap proposition, but is necessary among a number of other measures.

"There's no use doing just a sprinkler, you should have firewalls, fire retardant materials in the walls, self-closing doors, staff training and an evacuation plan," she said.

"At some point, we have to value the lives of these people as much as we do our own."