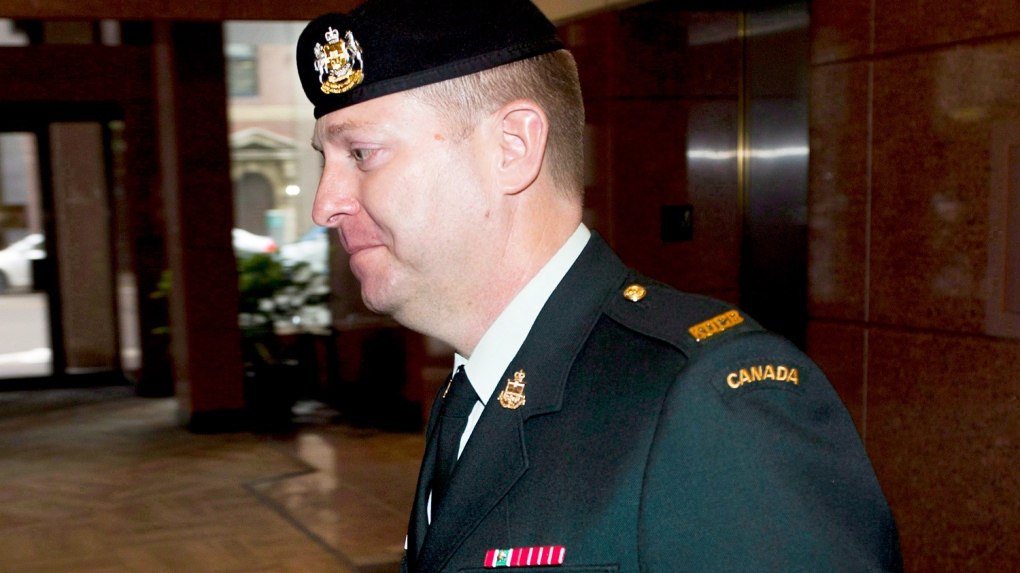 CALGARY -- A Calgary soldier convicted for his part in a deadly training accident in Afghanistan has won his appeal and hopes that a "long and difficult process" is finally over.

The Canadian Forces is reviewing the Appeal Court ruling and will determine whether to go ahead with another prosecution.

"I don't know that vindicated in the right way to put it," Watts said Friday in an interview with The Canadian Press. "This has been a long and difficult process for me and my family. I recognize the duty of the Canadian Forces to fully investigate the injuries and death of any of its members.

"That said nothing can lessen the impact that Cpl. Josh Baker's death has on his family or those of us who served with him."

Watts, who held the rank of captain at the time and was later promoted to major, was placed in charge of the training range where the accident happened in February 2010.

Baker, 24, was killed when a C-19 Claymore anti-personnel mine loaded with 700 steel balls misfired and peppered his platoon on the practice range. Four other soldiers were seriously hurt when they were hit by the blast.

The first two tests of the anti-personnel mine went off without a hitch that day. But during the next one, the ball bearings fired backward, hitting Baker and the others.

Video played at trial showed several soldiers, including Watts, standing around, watching the test. They were not inside armoured vehicles or standing behind them for cover, as set out in military safety regulations.

Watts was found guilty of the three charges in December 2012, demoted two ranks to lieutenant and given a severe reprimand.

Two other soldiers were also convicted for their roles that day.

Watts's commanding officer, Maj. Christopher Lunney, pleaded guilty Sept. 13, 2012, to negligent performance of duty for failing to ensure Watts was properly qualified on the C-19. He was demoted one rank to captain from major and received a severe reprimand.

He was acquitted of manslaughter. The now-retired soldier was given a six-month suspended sentence. He also received a fine and was demoted one rank to sergeant.

The Appeal Court found that the military judge who heard Watts's case erred in his instruction to the jury.

Watts's lawyer, Balfour Der, had argued that his client shouldn't be held responsible for what happened because Watts had made it clear to Lunney that he was untrained on the C-19.

Lunney had indicated he was satisfied that Ravensdale was qualified to run the training on C-19.

The Appeal Court took issue with the judge not instructing the jury to consider that Watts had told Lunney about his inexperience with the weapon.

"In my respectful view, this evidence was key to determining if Capt. Watts had the defined military duty imposed on him as required under the National Defence Act," Justice Elizabeth Bennett wrote.

"If the panel accepted Maj. Lunney had designated Warrant Officer Ravensdale as the officer in charge, then there would not be evidence to support Capt. Watts had a military duty."

"At the time, I never felt I was supervising the C-19 range and I believe all the testimony concurred with that, but that's not the way the process went for me," he said.

"The Court Martial Appeal Court clearly saw some of that. I'm relieved, but it's all a process."

"Should prosecutors decide to appeal the decision, they have thirty days in which to file their application for leave to appeal to the Supreme Court of Canada. Otherwise, prosecutors will decide whether or not to proceed with a new trial," he said.

Watts said he hopes to see his previous rank of major restored in short order.

A long-time firefighter with the Calgary Fire Department, he said he realized there was a risk in appealing his convictions.

"Clearly as much as everybody who was there that day saw it a different way and has their own perspective I did not think that this was a battle that should just be let go," Watts said.

"Had I been convicted and given a sentence of incarceration I would have lost my position within the Calgary Fire Department.

"Those are all things that weigh on you and make it such a long and difficult process, but as far as the appeal I was confident once facts were reconsidered that the appeal would be successful."