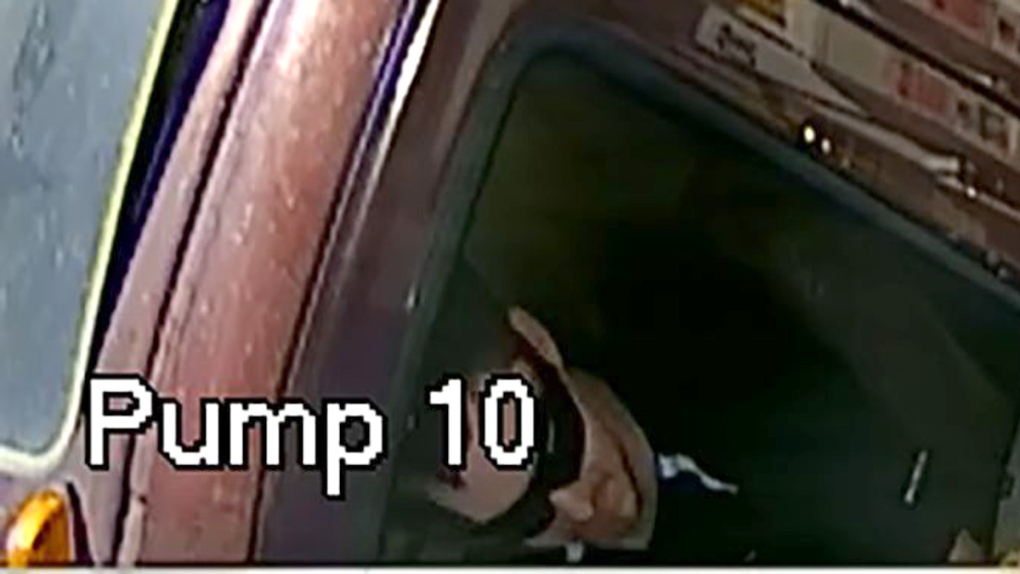 Calgary police are looking for this suspect, spotted at a Calgary gas station on Sunday, June 7, 2015. (Calgary Police handout)

Calgary police are searching for two suspects in an alleged gas-and-dash that left a 35-year-old woman in serious condition after she tried to stop the men from fleeing in a stolen pickup truck.

Ashtiana Rashidi, also known as Maryam, is in a coma in the ICU at Foothills Hospital in Calgary after suffering multiple head injuries.

Police say that Rashidi was struck and dragged around 11 a.m. on Sunday by a driver who was fleeing a Centex gas station in northwest Calgary.

The two suspects drove off without paying for gas, and were about block away at a nearby Home Depot when Rashidi, an employee of the gas station, caught up.

Police say she then confronted the two men, before the driver hit the gas and struck her head on. Rashidi flew onto the hood of the truck and was carried for about 15 metres, before she fell off and was run over by the vehicle.

"I was picking out some plants when I heard some yelling," said Rod Lechelt, who witnessed the incident from outside the Home Depot entrance.

"She was standing outside of a big pickup truck, yelling at the guy inside of it. He immediately backed up and then pulled out," he said. "The next thing I heard was a bunch of screaming, so I ran out and she was lying out on the ground."

The driver fled the scene. Police found Rashidi in the middle of 16th Avenue, and she was taken to hospital with life-threatening injuries.

Rashidi and her husband Nourani Shalloo, both engineers by trade, have a six-year-old son. She is originally from Iran, and had moved from to Calgary from Montreal.

Nourani Shalloo said that in her native country employees are responsible for items stolen during their shifts, which may be why she confronted the two men.

Police are looking over surveillance video from neighbouring businesses in an attempt to track down the suspects.

The two men are described as Caucasian, between 20 and 25 years old, with slim builds. The driver is said to have brown hair, while the passenger has blond hair and was wearing a cowboy hat during the incident.

Anyone with information is being asked to contact Calgary Police Service at 403-266-1234 or Calgary Crime Stoppers.

The incident also prompted questions about whether Alberta should institute legislation, similar to that in B.C., which forces drivers to pay before they pump.

Calgary police said that they're in favour of province-wide changes.

"When it comes down to anything that can reduce something like this happening … because it is not about dollars and cents it is about lives, then we're going to support it," said Insp. Kevin Thrower.

The owner of the Centex, Alnoor Bhura, agreed, criticizing the province for its inaction on the issue in the past.

"The government of Alberta has shown very little or no leadership in this matter in the past, even though they have been advised by various chiefs of police to adopt 'pay before pump' legislation," said Bhura in a statement Monday.

"We hope this new government reconsiders this issue and brings forward so much needed legislation and leadership."