Calgary begins to clean up from massive flooding

Thousands of Calgary residents have returned home following severe flooding that prompted a massive evacuation the past few days.

Calgary Mayor Naheed Nenshi said evacuation orders for 65,000 people were being lifted Sunday, as the water in the Bow and Elbow Rivers continue to recede.

According to the city’s website, areas in the following communities may not yet be open: Roxboro, Inglewood, Bowness, Bridgeland, Chinatown, East Village, Elbow Park, Rideau, Erlton, Mission, Stanley Park/Elboya, Sunnyside and Downtown.

Evacuees can check which orders are being lifted by checking the website and the updated evacuation zone map.

Residents were allowed to return after 1 p.m. local time, but were required to visit a re-entry centre in their neighbourhood. Details about the re-entry process can be found on the city’s website.

Residents who are permitted to return home are being asked to perform some basic assessments on their houses to determine if the gas, electricity or water need to be turned on, Nenshi said earlier Sunday.

Details about the assessments, as well as a brochure for returning residents can also be found on the city’s website.

Nenshi said despite the good news, the city was still under a state of emergency.

“We are certainly still in a state of emergency and as always our number one priority is people’s safety,” he said during a news conference Sunday. He said the rivers still pose a significant danger.

“Stay away from the rivers… the riverbank could wash away from under you in an instant… it may look safe, it is not safe.”

The mayor said he understood that Calgarians were anxious to return home, but they needed to remember that safety was the most important issue.

As the city works to restore power as quickly as possible, more than 90 per cent of the buildings in the city’s downtown core are expected to be open by Tuesday, which is earlier than expected.

But Nenshi said certain pockets of the downtown may take weeks to return to normal.

Meanwhile, 20 assessment teams are working round-the-clock to assess the structural integrity of affected buildings and homes.

Earlier Sunday, Bruce Burrell, director of the Calgary Emergency Management Agency (CEMA), said crews are working to address a number of “key issues” in the downtown core, including an unstable construction crane, flooded underpasses and a major power outage.

He said he does not know when power will be reinstated to the affected parts of the downtown core.

Members of the Canadian Forces were scheduled to work along the east bank of Calgary’s Bow River Sunday to shore up the banks and help increase stability around a critical energy substation.

As residents began to return to their homes and businesses, they got a first-hand look at the damage the flooding caused.

When Nathan MacBey and his wife returned to their Calgary home, they found that the water at its peak had risen to the level of their kitchen counter. He said their basement is still swamped and their main floor is covered in mud.

The father of two told the Canadian Press that he’s devastated by the emotional loss.

"Material possessions can be replaced. It's the memories. We don't worry about replacing the desks and the chairs," he said.

Recovery could take weeks and months

On Saturday, Nenshi warned residents that the recovery from the flooding would take “weeks and months” and would come with a high price tag.

Among the damaged buildings was the Saddledome – home to the Calgary Flames and an important venue for the Calgary Stampede, scheduled to kick off in two weeks. The iconic arena was flooded up to the eighth row of the lower bowl.

To the west, in Canmore, residents have been allowed to return to 260 homes, but the RCMP say around 40 homes are too damaged to allow residents back.

The raging waters washed away resident John Marriott’s backyard and even approached the foundation of his house. Marriott told the Canadian Press he chooses to remain positive in light of the damage.

“It’s still a lot better than watching it flow away in the creek, which I thought it was going to be,” he said. "I don't want to relocate but I guess you do what you have to do. It's just a house."

Large portions of High River remain under water and the town remains locked down. The town was especially hard hit, and officials say it will be days before residents can return.

Frustrations are growing among residents as they wait to return to their homes, but Mayor Emile Blockland said it’s not currently safe for re-entry.

“Everybody has a reason why they want to be back in the community but the logistics of making that happen are enormous because we can’t let people into the community unescorted,” he told CTV News Sunday.

Members of the Princess Patricia's Canadian Light Infantry from Edmonton are in High River, helping to check homes in hard-to-reach areas. 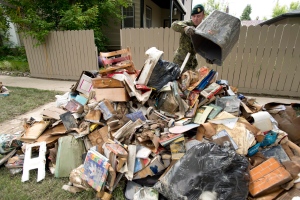 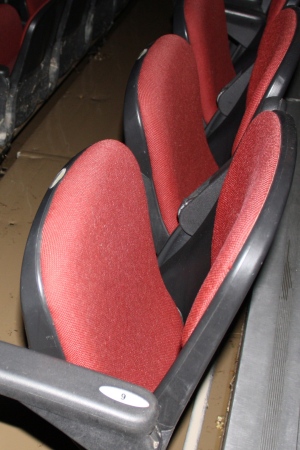 Saddledome after the flood, from above and inside stadium