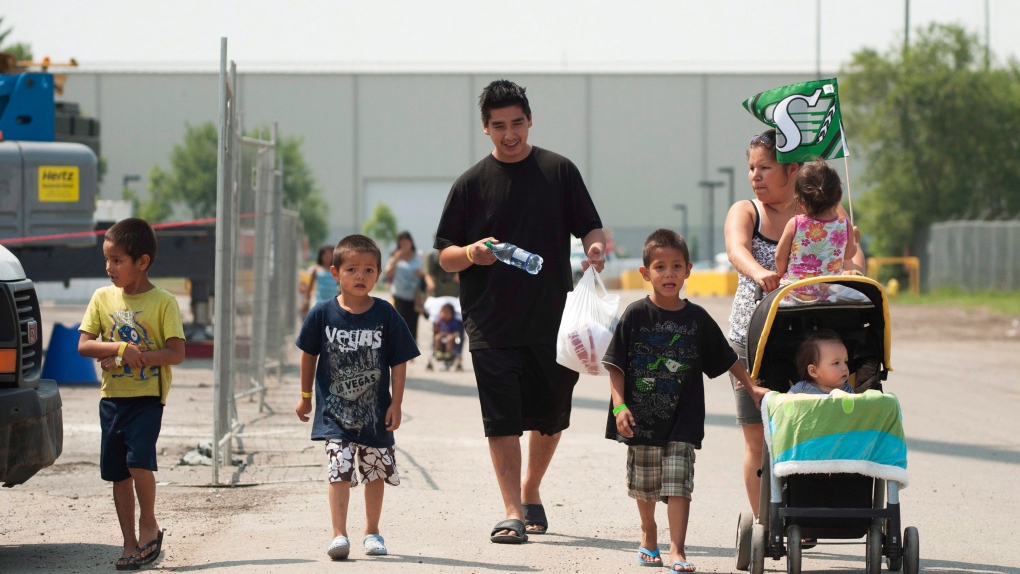 A family from Sturgeon Lake, Sask. walks toward a swimming pool in Regina on Monday, July 6, 2015.(Michael Bell / THE CANADIAN PRESS)

PRINCE ALBERT, Sask. -- Trisha Halkett has one wish as she spends her second week out of her northern Saskatchewan home because of threatening wildfires.

She would like to be back in Montreal Lake when her second baby is due to arrive next month.

"I certainly hope so," said Halkett, 20, patting her stomach on a bench outside a Prince Albert hotel, her two-year-old daughter, Keirra, and husband Dudley Ross sitting by her side.

The family is among the more than 13,000 people who have fled as wildfires sweep across great swaths of northern forest. Massive fires continued to burn out of control Friday as crews worked to protect communities from the flames.

Steve Roberts of the Wildfire Management Branch says one blaze near the town of La Ronge has merged with another fire and is almost 1,000 square kilometres in size.

"For those trying to figure out what that looks like you take the entire area of the city of Saskatoon -- it is 5 1/2 times that size -- and that is just the one single fire within two kilometres of La Ronge."

Another major fire was within two kilometres of the village of Pinehouse, where 900 people usually live.

Data posted on the Canadian Interagency Forest Fire Centre says wildfires have burned almost one million hectares in Saskatchewan so far this year.

Montreal Lake, about 130 kilometres north of Prince Albert, is normally home to about 1,800 residents. Now, it's a ghost town and about 200 Canadian soldiers are pushing through the bush trying to keep it safe.

A handful of houses have been destroyed, but Ross, 24, says his family has been lucky so far.

"I was worried at first that ours would go down because that's where the fire was," said Ross. "It missed our house and went another way."

Halkett said she just wants life to return to normal.

"It's boring. I would probably be outside playing with my three dogs, but I'm not too sure if they're alive or not."

Dorothy King Fisher is also eager to leave Prince Albert and get back to Montreal Lake.

Like Halkett, she is most worried about her dog named Weasel.

"It's kind of lonesome," she said. "I am kind of worried. I left my little puppy at the house, but my son is looking after it and goes there every day to feed it. I can always get another house, but I can't get the same dog."

After two weeks in Prince Albert, Henry Herman has had enough.

He says it isn't fire that's the danger in his hometown of La Loche -- it's the smoke.

"I'm going to try and hitchhike home," he says. "I can go home and try and help out as much as I can."

Emergency Management director Duane McKay acknowledges evacuees are pressing community leaders for permission to return, but he warns against doing so before the fires are completely under control.

He said they would be putting themselves and the people who would be called in to save them at risk if they got into trouble. The government says people should stay away until the fires are no longer a threat, smoke doesn't pose a health hazard, there is a supply of potable drinking water and communities have access to emergency services.

"It would be unfortunate if local leaders felt so much pressure that they had to allow people to go back in and then have the conditions change where we would have to do another emergency evacuation," McKay said.

-- With files from John Cotter in Edmonton.