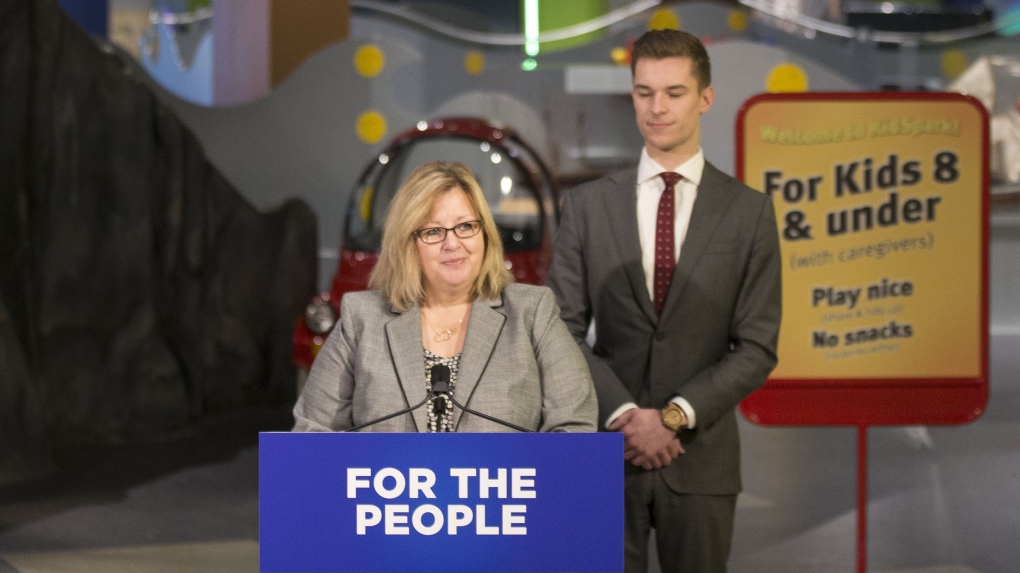 Ontario Education Minister Lisa Thompson stands alongside Parliamentary Assistant, Sam Oosterhoff, as she makes a statement at the Ontario Science Centre in Toronto on Friday, March 15, 2019. THE CANADIAN PRESS/Chris Young

TORONTO -- Some Ontario school boards have written to the education minister with concerns that planned increases to class sizes will mean they can offer fewer elective courses, such as in the arts and skilled trades.

Boards in Peel region, Toronto and eastern Ontario told Lisa Thompson that her move to increase average high school class sizes from 22 to 28 will affect student learning. Thousands of teaching positions are expected to be lost over the four years the change is phased in, though the minister has said there will be no "involuntary job losses."

"The reduction of staff, even through attrition, will result in fewer options for students, as well as increased concern about student safety," wrote Shannon Binder, the chair of the Hastings and Prince Edward District School Board. "There will be negative impact on student achievement and well-being."

The Toronto District School Board told the minister that increased class sizes will mean fewer teachers will be needed in schools and that will put some programs that schools currently offer in jeopardy.

"Students should have diverse learning experiences beyond the compulsory subjects," chair Robin Pilkey wrote. "Such experiences are typically found in course electives, yet these are the subject areas most affected by a teacher reduction of this extent and a class size increase by this magnitude."

Pilkey, whose board expects to lose 800 teaching positions, cited classes in areas such as visual and performing arts, humanities, social science and skilled trades.

Thompson has often spoken of the importance of skilled trades, but didn't directly address that concern when asked about it Wednesday.

"Even with zero increases from (kindergarten to Grade 3), no more than one (additional) student from 4 to 8 and upwards on average of six students in high school, it's not going to make a difference," she said, citing an analysis piece that examined her suggestion that larger class sizes will make build resilience.

"You know what makes the difference? It's the quality of teacher in front of the student and that's what we're focusing on."

The Peel District School Board also said larger class sizes will hamper schools' ability to offer specialized courses, including those on skilled trades and technology.

"Although we appreciate developing resilience in youth is one goal of this government, compromising learning opportunities for students is not how we hope this will be supported," wrote chair Stan Cameron.

The Hastings and Prince Edward board also expressed concern about Thompson's announcement that starting in 2020-21, students will be required to take a minimum of four credits out of 30 through e-learning courses.

"While we already offer e-learning courses, we know that in many areas of our school board students are unable to access reliable internet service and/or transportation to an accessible location," Binder wrote. "The e-learning environment is not appropriate for all students."

Thompson said she wanted to remind teachers and boards that schools are a place of learning, "not for pushing ideologies and nonsense, and fearmongering."

"I really appreciate everybody's voice if it's presented in a constructive manner," she said.

One of the organizers, high school student Rayne Fisher-Quann, said people from about 700 schools have registered to take part in the walkout.

"I consider what we're doing here to be the most constructive form of student voice that there is," she said. "I don't think there's a better way to teach students about civic engagement and about politics and about their role in their own futures than asking them to take this very active role."

"This government is basically telling this upcoming generation of students that are now in school that they are not going to get the opportunities that their peers in the past have had," she said.