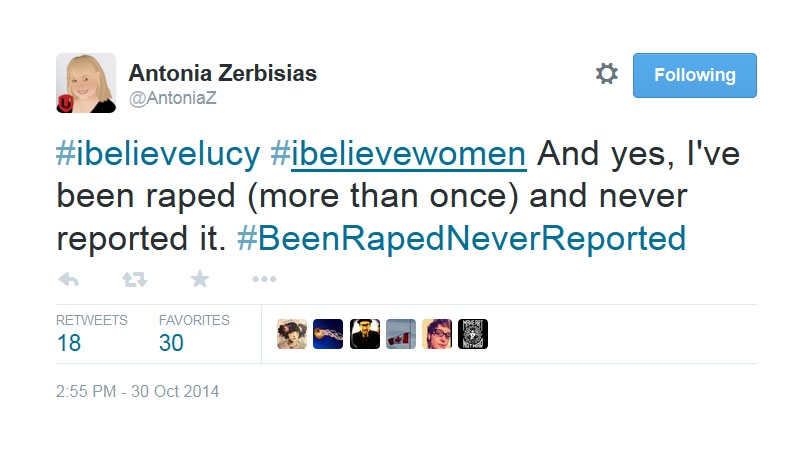 After several women came forward in the press with allegations of violent encounters with former CBC host Jian Ghomeshi, some have been asking why these women haven't reported their allegations to the police.

Canadian actress Lucy DeCoutere has said she didn't go to police because she believed the case would come down to his word against hers. She suggested she feared that police would ask her why she had put herself in that position, to be in the house of a man she didn't know well, and that they would think she had too many holes in her story.

Ghomeshi is not facing rape or assault charges and none of the allegations have been proven in court. The former radio host has maintained that all of his physical relationships with women have been consensual.

Twitter began helping to answer the question of why women don't report assaults on Thursday night with the hashtag #BeenRapedNeverReported, which quickly began trending.

Toronto journalist Antonia Zerbisias was the first to use the tag after she says she had a conversation on Facebook with fellow journalist Sue Montgomery, who also detailed assaults against her.

Warning: Some readers may find these stories disturbing.

#ibelievelucy #ibelievewomen And yes, I've been raped (more than once) and never reported it. #BeenRapedNeverReported

He was my grandfather. I was 3-9 yo. Cops wanted to know why I waited so long to report it. #BeenRapedNeverReported

I've #BeenRapedNeverReported because I knew I would be blamed because I had been drinking.

He pushed me on the couch and said: "you can't say no, you're my girlfriend." — I cried all that night. Many after. #BeenRapedNeverReported

#BeenRapedNeverReported the 2nd time I was 21, I went to the hospital in Russia and the dr told me to drink more next time so I'd enjoy it

Being raped was horrible. Trying to report it & then being made to feel it was my fault was worse. #beenrapedneverreported

I was attacked and reported it. My attacker went to prison. I know what it takes to speak out & I salute you all. #beenrapedneverreported

YWCA Canada shared a graphic earlier this week that reported that out of every 1,000 sexual assaults in Canada each year, only 33 are reported to the police, charges are laid in 12, and only six go on to be prosecuted.