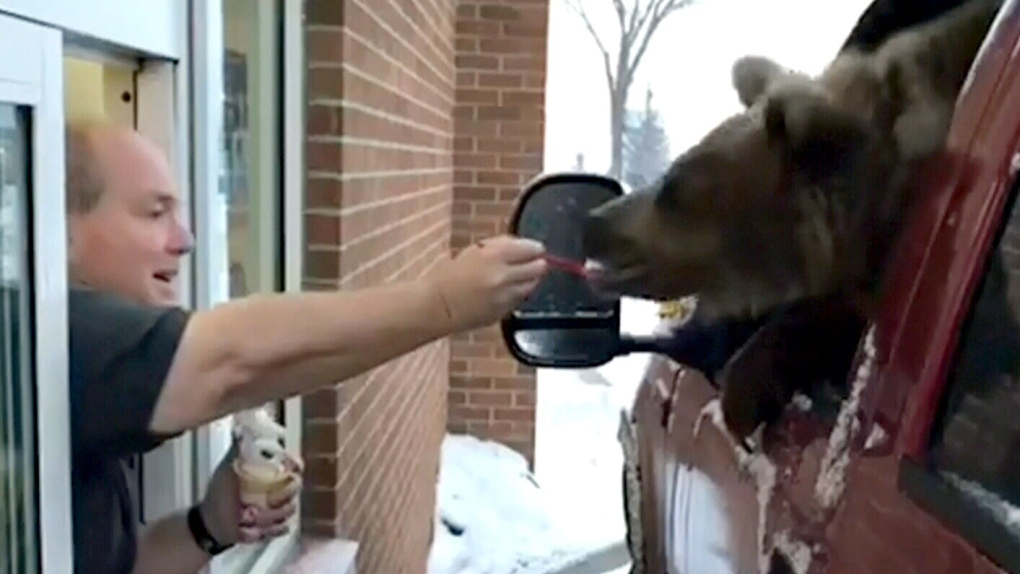 A Kodiak bear from a central Alberta zoo was caught on camera eating ice cream in a Dairy Queen drive-thru in January.(Discovery Wildlife Park/Facebook)

An Alberta zoo has been fined $500 for failing to notify provincial officials when a bear was taken off park property and treated to soft-serve ice cream at a Dairy Queen drive-thru.

Video of the one-year-old Kodiak bear leaning out of a truck window to lick ice cream off a spoon gained international attention when Discovery Wildlife Park in Innisfail, Alta. posted it to Facebook in January.

The footage also caught the attention of Alberta Fish and Wildlife, which said it was not notified that the bear would be leaving the zoo that day.

Zoo owners Doug Bos and Debra Rowland pleaded guilty on Monday to two counts of violating a licence or permit, under section 12(3) of the Wildlife Act.

In an interview with CTVNews.ca, Bos said he’s glad the charges were laid because it proves that provincial oversight is working.

“You need to have rules and they need to be enforced, and they’re no good if they’re not enforced,” Bos said.

Taking animals out of the zoo for the day isn’t unusual. Bos said bears have left the park for visits to schools and movie sets. He said the ice cream incident is the first time in 28 years they’ve forgotten to notify provincial authorities.

“We’ve done it hundreds of times before – we’ve just never forgotten before.”

To make sure it never happens again, the zoo has instituted a new “double-check” policy that forces zookeepers to have the proper paperwork before they take an animal off the property.

The story has garnered plenty of attention, with the zoo fielding calls from around the globe after the video surfaced. Bos says the reaction has been mixed, with people split over whether or not the rules are necessary.

For his part, Bos says the regulations are “100 per cent” valid.

“This proves that there are strict regulations,” he said.” When you make a mistake, you have to pay for it.”