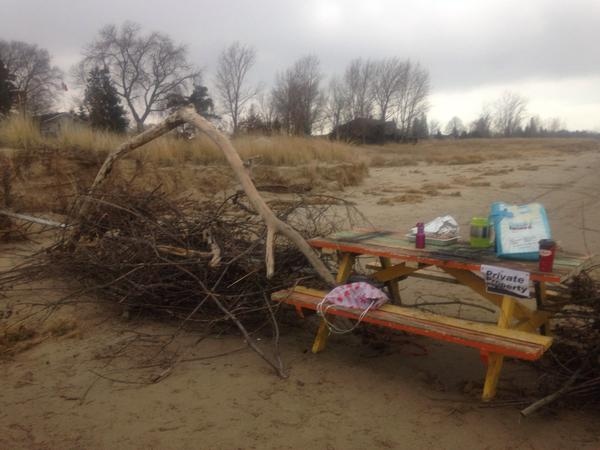 A bid by the Chippewas of the Kettle and Stony Point First Nations to reclaim land along an Ontario beach has hit an obstacle, after a cottage owner erected a barricade on his property.

Mark Lindsay placed tree branches, a picnic table and a metal pole on his property located along Ipperwash Beach Saturday, one day after municipal barricades had been torn down by members of the First Nations.

He told CTV London that he has no intention of removing the obstacle.

"If they want to drive their car, they'll have to go through the water or us, I guess," he said Saturday afternoon. "Yesterday, they decided to remove the barricades and destroy public property without permission from anybody (and) police stood by."

The First Nations said they removed the municipal barricades to reconnect the trail that historically linked the Kettle and Stony Point Nations, which means cars can now drive across the beach.

For decades, land along Ipperwash Beach has been privately owned. Landowners have left their properties open so that members of the First Nations and the public can enjoy the beach. But they fear that the beach will be ruined if cars are allowed to pass through.

Lindsay's family has owned a cottage on Ipperwash Beach -- located on the shores of Lake Huron, about an hour’s drive northwest of London, Ont. -- since the 1950s. The deed for the land says their property extends to the lake. He said he can't stop cars from approaching his property line, but he won't allow vehicles to pass through it.

"Traditionally, they rode horses or walked. So they're welcome to ride their horse through here or walk today," he said.

Cottage owner Randy Sommerville said preventing cars on the beach is a matter of safety.

"I don't know why anybody would want to drive through, but I believe we shouldn't let them through for safety and environmental reasons," he said.

Lambton Shores Mayor Bill Weber said Sunday that he hopes “cooler heads prevail” in the matter, and that requests have been sent to provincial and federal governments for meetings to resolve the dispute.

“There shouldn’t be winners and losers in this – there has to be a settlement that works for everyone,” Weber told The Canadian Press.

Weber also said that the municipality has no issue with Kettle and Stony Point claiming the strip of land as a traditional trail, but wants input from other levels of government on how it can be used.

In a statement issued Friday, Kettle and Stony Point First Nation Chief Tom Bressette said his members chose to “exercise our jurisdiction in reopening this travel route” for First Nation members, residents and visitors to the community.

The dispute over the barricades is the latest development in a campaign by the First Nations to reclaim land that was taken from them during the Second World War.

In 1995, the dispute reached a breaking point when protester Dudley George was shot and killed by an OPP officer after members of the First Nation occupied nearby Ipperwash Provincial Park.

Today, tensions remain high in the area. One woman crossed the barricade Saturday, while yelling at the landowners. "Get it out of here," she cried.

As for Lindsay, he said if protesters remove his barricade, he'll put up a new one.

"If the police want to arrest me for standing on my own property and protecting it, they can do so and I'll go to jail," he said. "If they take this stuff out tonight, I'll put more up tomorrow."