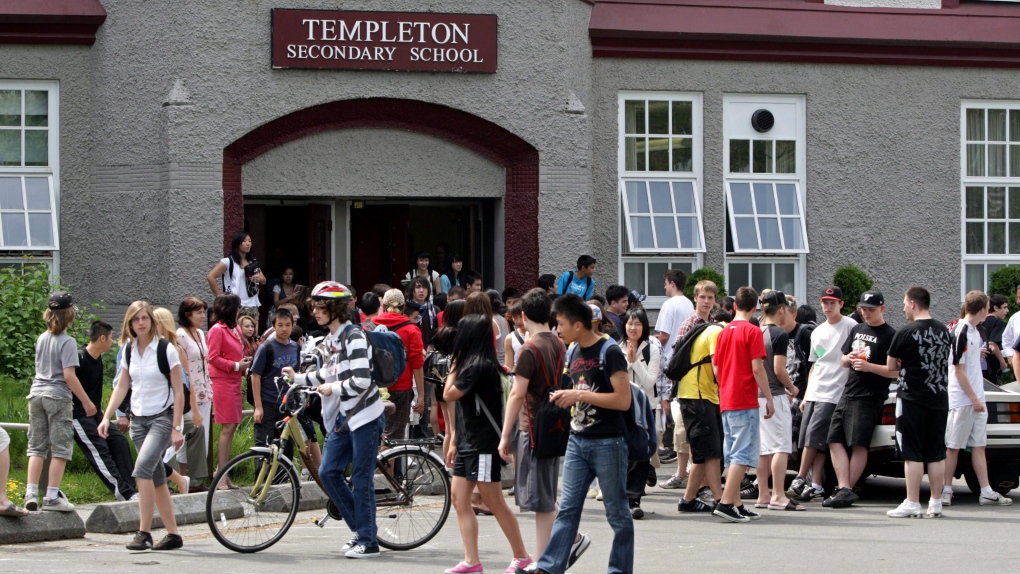 VANCOUVER -- A complaint from a parent about a classroom assignment to match the word "squaw" to "Aboriginal woman" has prompted a publisher to remove a book for review and is raising questions about how schools should teach controversial topics.

A Vancouver woman took to social media over the weekend to express her shock about educational material used at Templeton Secondary School in Vancouver related to the graphic novel "Susanna Moodie: Roughing it in the Bush."

Publisher Margie Wolfe of Second Story Press apologized Monday and said the book had been removed from the company's website for review, along with all other material with content related to Indigenous history, peoples, and communities.

"We take very seriously the criticisms of this guide and sincerely apologize for the hurt and offence we have caused," Wolfe said in a statement.

"We appreciate the efforts made by everyone who called attention to the guide, particularly the family in Vancouver, British Columbia, who were so hurt by the use of the resource in the classroom."

The woman, whose name isn't on her social media account, said she was livid about the "stomach-twisting" lesson plan. She could not be reached for comment.

The novel is an adaptation of a Canadian classic first published in 1852, in which the word squaw shows up 39 times. It was accompanied by a recently developed teaching guide that describes the book's language as politically incorrect.

One of the exercises asks students to match terms with their "appropriate language" definitions, which for squaw is "an Aboriginal woman."

"Common prejudices in the nineteenth century resulting from ... racism perpetrated by white Europeans against blacks and Aboriginals were reflected in the everyday language people used to describe themselves and each other," the teachers' resource guide says.

"Today it is unacceptable to use words such as Indian, squaw, darkie, Negro, Yankee, and papist. The use of such language in this book should be viewed in the context of its time in history."

Jon Smith, an English professor at Simon Fraser University whose research focuses on the southern United States, applauded the decision to pull the material from circulation.

Smith dismissed the notion that discriminatory language is any less offensive in the past just because its use may have been more widespread.

"That's a pretty naive way to talk about racism. My analogies are with the N-word, and that word was always loaded with power and derogatory," he said.

"I mean, my gosh, they actually had the word darkie in there? Even in 1852, that word wasn't exactly free of racist connotations.

"In the U.S. South, people want to say, 'Heritage not hate.' But the heritage is hate; hate is part of the heritage. And the only way to get past that it seems to me is to acknowledge that quite forthrightly."

The Vancouver School Board is looking into the context in which the materials were used in the classroom, Supt. John Lewis said in a single-sentence statement.

Glen Hansman, president of the B.C. Teachers' Federation, said it is important for instructors to engage with students on fraught subjects rather than shy away from them.

"The responsibility of the teacher then is to unpack that use of language and to situate it in the historical context and to do things in a way that is sensitive to students in the classroom," Hansman said.

"My understanding is that is exactly what was happening in the particular classroom that triggered this incident."

Hansman said he does not presume to know the particular circumstances of this parent, but he would encourage her to reach out and engage with the teacher and the school about her concerns.

"Rather than being in denial about attitudes we used to have, we have to acknowledge them, identify them for what they are and then equip our teachers and students with ways of combating those things so they don't occur again," he said.

Education Minister Rob Fleming said he is always concerned when a student has a negative experience, but added that it is unfortunate the incident is drawing attention away from the overwhelming success of the curriculum to date.

"The conversation that British Columbia is having all over the school system is about how exciting the new curriculum is and how inclusive the lessons of Aboriginal culture and their contributions to British Columbia culture are," Fleming said.

B.C. introduced a new curriculum last year that teaches students as young as 10 about the government's past discriminatory practices, including the crushing legacy of Canada's residential-school system and the Chinese Head Tax.