B.C. residents on alert as forest fires continue to burn

West Kelowna is under a state of emergency as the fire there threatens more than a thousand homes. About 2,500 affected residents scrambled to safety Thursday night.

Fires are also burning in the towns of Lytton and Hudson’s Hope, among others.

Environment Canada and the B.C. Ministry of Environment issued a special air quality statement Friday for pockets of B.C.

The concentrations of smoke in the affected regions will vary depending on winds, fire behaviour, and changes in temperature, the weather agency said.

Some improvement is expected when rain arrives in central B.C. interior.

Residents can check on the status of the advisories by checking the province's air quality website.

British Columbians with chronic medical conditions are being advised to postpone any strenuous exercise until the advisory is lifted, the agency said.

In Alberta, Environment Canada and Alberta Environment issued a special weather statement Friday, for a large swath of the province stretching from Jasper National Park to Cold Lake.

The weather agency warns that smoke from the forest fires will result in poor air quality and reduced visibility for the affected areas.

Residents with respiratory or cardiovascular conditions should monitor their symptoms and consult with their doctors if their symptoms start to worsen, the agency said. Until the statement has been lifted, affected Albertans are also encouraged to reduce the amount of time they participate in outdoor activities.

Residents can check the air quality levels on the Alberta Environment website.

Below is an interactive map from B.C. Wildlife Management. Click on the map to see current active wildfires in the province. 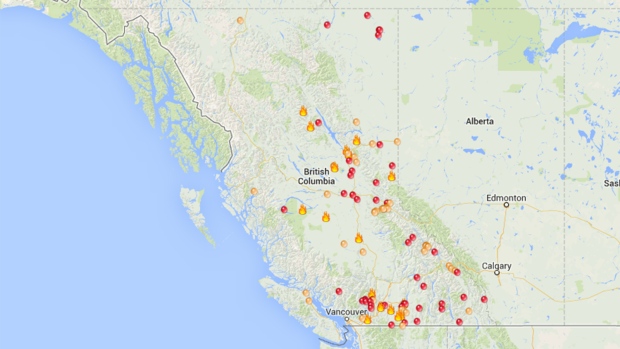