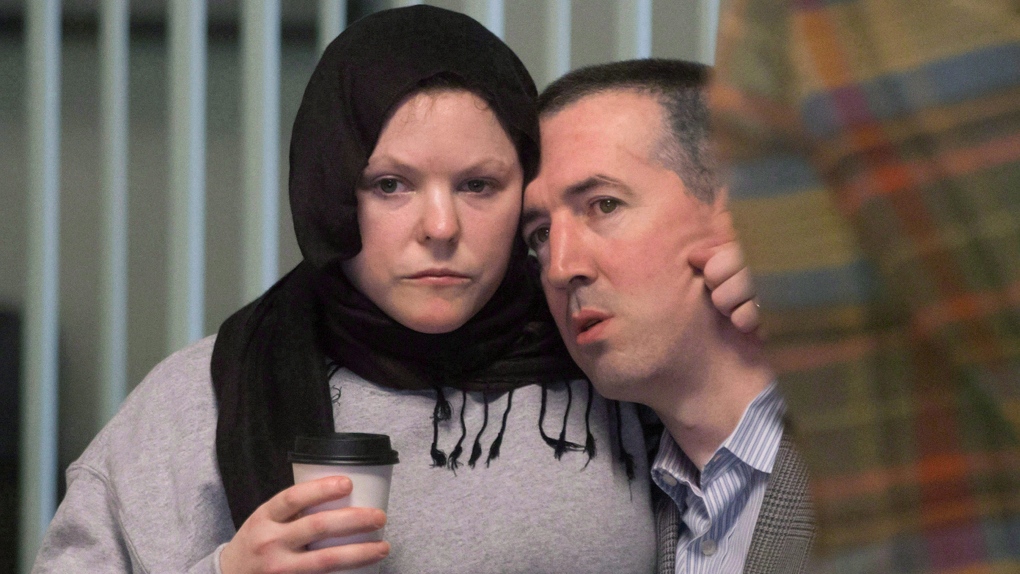 Amanda Korody, left, and John Nuttall sit at B.C. Supreme Court after a judge ruled the couple were entrapped by the RCMP in a police-manufactured crime, in Vancouver, on Friday, July 29, 2016. THE CANADIAN PRESS/Darryl Dyck

VANCOUVER -- A provincial court judge in British Columbia has delayed a hearing over a peace bond for two people awaiting an appeal on terror charges.

Judge Reg Harris granted the adjournment Wednesday after defence lawyers representing John Nuttall and Amanda Korody argued that the hearing would be a waste of legal resources since the couple is already bound to bail conditions while the Crown's appeal goes ahead later this year.

Nuttall's lawyer Marilyn Sandford told the court that a peace bond hearing would result in a "month-long extravaganza" of legal proceedings because any evidence brought forward by the Crown would require explanations including reviewing hours of video footage that was already presented in the terror trial.

A jury found Nuttall and Korody guilty of terror allegations in 2015.

A B.C. Supreme Court judge threw out the verdicts against them last year and rebuked the RCMP for entrapping the pair, who faced terrorism-related charges for planting what they believed to be explosives at the provincial legislature on Canada Day in 2013.

The Crown said last week that it was seeking the peace bond because Nuttall and Korody still pose a threat to the public, but prosecutor Sharon Steele told the court Wednesday that they are adhering to their bail conditions.

Steele said the couple's bail supervisor confirmed they were meeting with him twice a week, and that those meetings will likely be reduced to once a week because they have secured stable housing and are continuing to follow the other conditions.

She said an adjournment would not prejudice the prosecution and the reasons to move forward with the hearing are based on general legal principles to complete cases in a timely manner in the best interest of those on trial.

"This is unusual where the accused ... are consenting to that," Harris said of the defence applying for the adjournment.

"I think everything about this situation is fairly unusual," Steele responded.

In his decision to defer the peace bond hearing, Harris said it was made in the best interest of judicial resources and since the bail conditions were satisfying all parties, there isn't an immediate public safety concern.

The case is scheduled to be heard at the B.C. Court of Appeal on Oct. 16.

Harris said the peace bond hearing will resume in November, depending on the outcome of the appeal by the Crown.