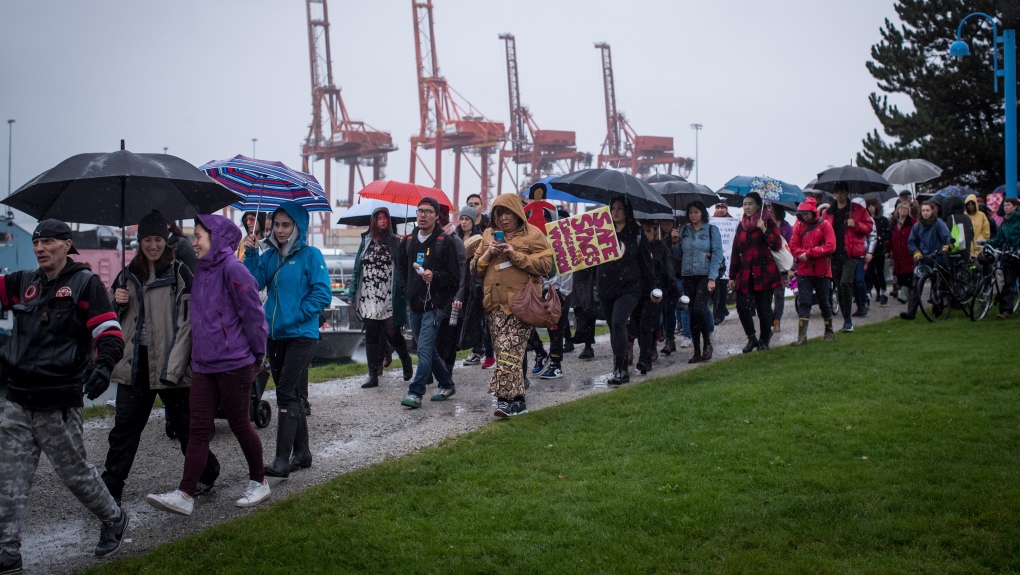 People participate in a march calling for justice for missing and murdered Indigenous women and girls, in the Downtown Eastside of Vancouver, on Sunday October 20, 2019. THE CANADIAN PRESS/Darryl Dyck

VICTORIA -- British Columbia is set to become the first province to introduce human rights legislation to implement the United Nations Declaration on the Rights of Indigenous Peoples, which would mandate the government to bring provincial laws and policies into harmony with its aims.

The legislation is expected to be introduced on Thursday and is bound to raise questions about the potential impact on the way the province is governed, but Indigenous leaders, academics and members of B.C.'s New Democrat government say it will ensure Indigenous Peoples are full participants in all aspects of the province.

"This is about recognizing human rights applied to Indigenous Peoples and it's something that governments of all stripes have not done before, despite the fact it's in the Constitution of Canada," Scott Fraser, the province's minister of Indigenous relations and reconciliation, said Wednesday.

He said the legislation is British Columbia's version of a federal bill that died on the Senate order paper when Parliament adjourned for Monday's election.

The declaration was adopted by the General Assembly of the UN in 2007 after 20 years of debate, although Canada was originally one of four countries that voted against it. Among other things, the declaration says Indigenous Peoples have the right to self-determination, which means they can determine their political status and pursue economic, social and cultural development.

The NDP has made reconciliation with Indigenous Peoples and the implementation of the declaration a top priority since it formed a government in 2017. The mandate letter for each member of Premier John Horgan's cabinet says ministers are responsible for bringing the principles of the declaration into action in B.C.

"I've been all over the place meeting with industry, meeting with stakeholders, meeting with government, meeting with NGO's, meeting with labour," said Fraser. "What we're talking about is working with First Nations in a different way, from the beginning of projects. Not working together and ignoring that rights exist almost guarantees disagreement."

He said the legislation will not effectively give Indigenous Peoples the power to stop resource development projects on their traditional lands.

"There's no veto in the 46 articles in the UN Declaration of the Rights of Indigenous Peoples and there's none contemplated with the legislation," Fraser said.

The Supreme Court of Canada has ruled in several cases in B.C. that Indigenous Peoples must be consulted about development projects on their lands. Several First Nations continue to challenge the federal government's expansion of the Trans Mountain pipeline project from northern Alberta to B.C.'s coast.

Grand Chief Ed John of the First Nations Summit, one of B.C.'s largest Indigenous organizations, said the legislation will redefine, reset and restructure historical relations between B.C. and Aboriginal Peoples.

"It's a milestone in Indigenous, state relations," he said.

John also rejected concerns that the legislation would grant Indigenous Peoples a veto on resource development.

"It's a go-to thing for those who want to run (it) down and keep the status quo in place," he said.

Mary Ellen Turpel-Lafond, a law professor at the University of British Columbia, said the issue of free, prior and informed consent is not new because courts have ruled on numerous occasions that governments and resource developers must consult with Indigenous groups about projects on their lands.

Turpel-Lafond, who provided legal advice to Indigenous groups that helped develop the B.C. legislation, said governments can still approve projects despite opposition but the process must involve consultation with Indigenous Peoples.

"If you want to develop a new mine, for instance, you've got to work with First Nations," she said. "The key to this legislation is a new pathway. What B.C. is going to have is a way of doing business that's going to conform to what's required, by what's already in our law. But we're going to make it clear across the board."

"I do think that in the history of B.C. this will be a turning point," she said. "It's a major shift. I think we'll lead Canada and possibly lead the world."

Prof. Jean Paul Restoule, chairman of the department of Indigenous education at the University of Victoria, said the legislation is long overdue, considering the relationship between Indigenous Peoples and governments has been decidedly one sided.

"The whole declaration is really about recognizing the full human rights and collective rights of Indigenous people," he said. "To me the UN declaration represents Indigenous community hopes and aspirations across the whole globe."