Salmon farming in British Columbia has long faced controversy, with concerns about fish escapes, antibiotic use, and the spread of viruses and sea lice.

Most of the anger and calls for change have been directed at fish farms, but CTV News has obtained video footage that shows fish processing plants may be contributing to problems as well.

The video shows a farmed-salmon processing plant in the Discovery Passage channel off Vancouver Island discharging bloody effluent from a pipe under the water – effluent that tests have shown contains a highly contagious fish virus.

In the video, large clouds of red liquid spew from the pipe directly onto the ocean floor, 30 metres under the surface. Sea urchins rest around the pipe, while the water around them shimmers with discarded fish scales and blobs of waste.

B.C. photographer Tavish Campbell recorded the video. Campbell dives all over B.C. to take underwater photos of wild salmon and sea life. But he says he's never seen anything quite like his footage of a thick column of blood gushing out of a pipe onto the ocean floor.

The pipe is connected to Brown's Bay Packing Co., a farmed Atlantic salmon processing plant near Campbell River, B.C. It's also near one of Canada's biggest wild salmon migratory routes.

“This current is going to disperse this stuff all over,” Campbell told CTV News. “It is insanity dumping this effluent right into the salmon migration corridor.”

Along with the footage, Campbell also grabbed water samples directly from the pipe's outflow. 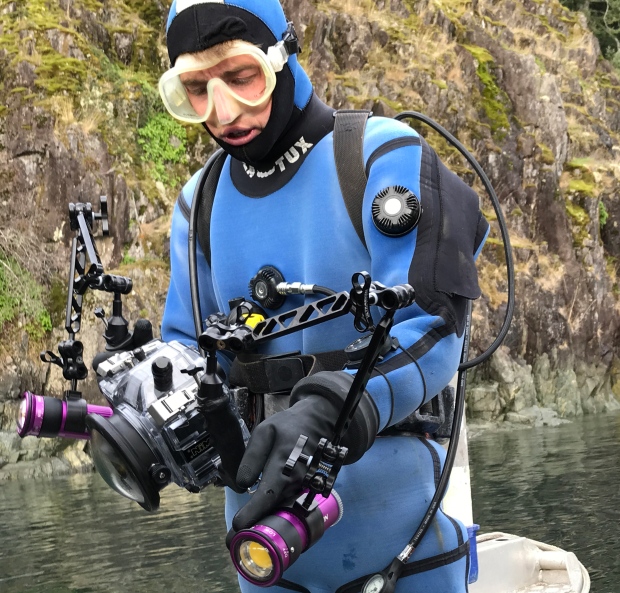 Activist and researcher Alexandra Morton has long raised concerns that Atlantic salmon farming is contributing to declining numbers of wild Pacific salmon. She asked Campbell to collect the water samples and then sent them on to the Atlantic Veterinary College for analysis.

Morton told CTV News that she found living intestinal worms in the samples. In addition, the college says it found Piscine reovirus, or PRV, a virus that was first detected in Canada in 2011 and that is now commonly found in farmed salmon. In some salmon, PRV causes no problems. In others, it is linked to HSMI, or heart and skeletal muscle inflammation, a potentially fatal condition that causes heart lesions and organ hemorrhaging.

HSMI poses no health concerns to humans but it can wipe out up to 20 per cent of a farmed fish population.

So far, the effect of releasing bloody effluent from fish processing plants is not known but Morton believes it could easily spread PRV to wild salmon species.

“You are distributing the virus in a way that nature could never possibly do, and the risk to wild salmon is just astronomical,” she said.

Dave Stover, the manager of Brown's Bay Packing, told CTV News in a phone interview that he hasn’t seen Campbell’s video and would not comment on it.

Stover confirmed that the company has a waste water effluent pipe and he said they have “an effluent permit” from the province. He said Brown’s Bay Packing follows industry standards.

"Our most stringent standard comes from the Global Aquaculture Alliance, which has a BAP (Best Aquaculture Practices) standard ... and those standards are sort of the highest levels and we meet or exceed those,” he said.

The managing of waste material in other food industries, such as poultry processing, is typically highly regulated. The same is true for meat processing, potato processing and wood pulp mills. But it appears that, when it comes to fish processing plants, there are few rules.

“There isn't a specific regulation under the Fisheries Act (on waste), which is somewhat surprising… So it does seem to be an oversight that needs to be addressed,” says Sean Jones, who specializes in Indigenous, environmental and regulatory law.

Most of the fish farms in the province are Norwegian-owned. Norway has in place several regulations to control the disposal of fish processing waste into waterways. But the same isn’t true for B.C., says Morton.

“In Norway, they know that blood is one of the leading vectors of disease. They know to be careful with it. Yet they come to B.C. where there is all this wild fish and they do not even bother to share that knowledge,” she said.

Morton said it shouldn’t be that hard to collect waste blood material and turn it into a fertilizer, instead of dumping it directly into the ocean.

The B.C. government says it is currently taking a closer look at the local fish farming industry. Last month it launched a review to see if best practices and ethical standards are being followed.

With a report from CTV’s B.C. Bureau Chief Melanie Nagy