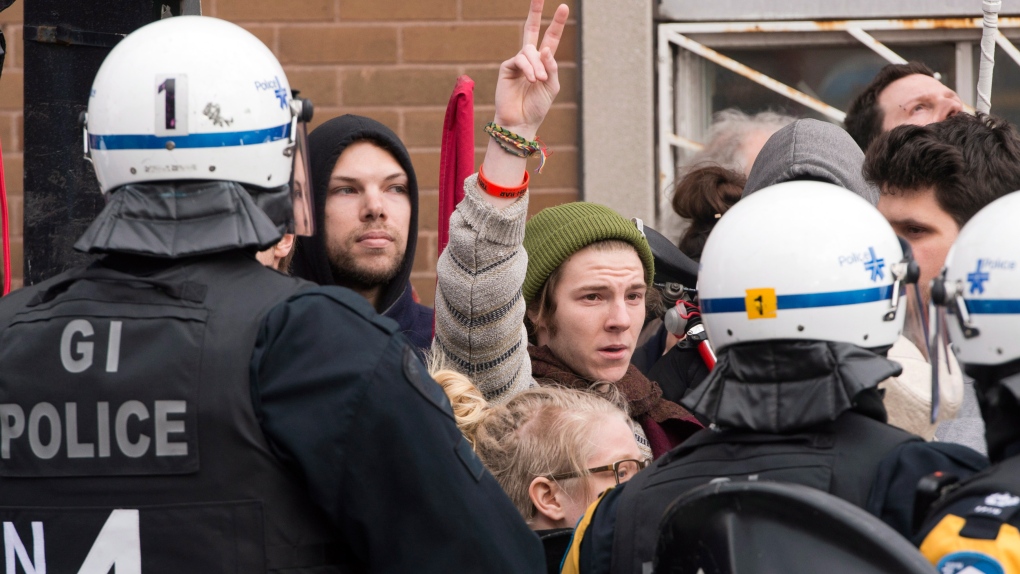 Police surround a group of protesters during the annual May Day anti-capitalism demonstration Thursday, May 1, 2014 in Montreal. (Ryan Remiorz / THE CANADIAN PRESS)

MONTREAL -- Montreal police arrested five people and handed out more than 130 fines on Thursday as they clamped down on anti-capitalist protesters during the annual May Day demonstration for workers' rights.

The demonstrators took to the streets to voice their opposition to the "ravages" of capitalism, with this year's theme focused on government austerity, environmental damage inflicted by the mining industry and the financial sector that supports it.

But the group barely made it two city blocks before riot police cornered them.

In recent years, police have shown little tolerance for demonstrations in Montreal and have wasted little time shutting down marches.

Across downtown Montreal on Thursday, police kettled other small groups of anti-capitalist protesters. Police had declared the march illegal even before it began because organizers had not provided the route beforehand.

A spokesman for the force said 132 people were eventually handed tickets for municipal bylaw violations, while five were arrested on possible criminal charges of mischief and assault on a police officer.

Four protesters suffered minor injuries. One had palpitations, while the three others had hyperventilation, facial cuts and nausea.

Those ticketed under a strict municipal bylaw face fines of nearly $640 for a first offence.

A man apprehended by police Thursday said he received one of those tickets.

"We came to demonstrate against capitalism and for workers' rights," said Mark Jewell.

"There were probably four times as many police as there were demonstrators who surrounded us.

Jewell, 26, was also slapped with a $600 fine for blocking traffic a couple of years ago during a protest amid Quebec's student crisis.

The student uprising flared up over tuition-fee increases and saw thousands of people march in the streets regularly for months.

"I kind of laugh about it because we are kind of supposed to believe that the police's job is to serve and protect and that's obviously not the case," he said. "It's a bit of a joke."

One group was still gathering at a park when police warned them of their infraction.

The protesters, several of whom were waving red flags, quickly responded by marching away from officers in the middle of a street.

They were swiftly rounded up.

That anti-capitalist march was supposed to end at Place Ville-Marie, a downtown building where many banks and mining companies have their corporate headquarters.

Before the demonstration, a spokesman for one group that co-organized the protest said it was important for people to get out in force on May Day.

"The powers that be keep repeating that there's no money, we're in a state of financial crisis, etcetera, etcetera," said Rich Bonemeal of the Montreal Anti-Capitalist Convergence.

"They're working for the rich to get richer, basically. We can't let the law enforcement just intimidate us."