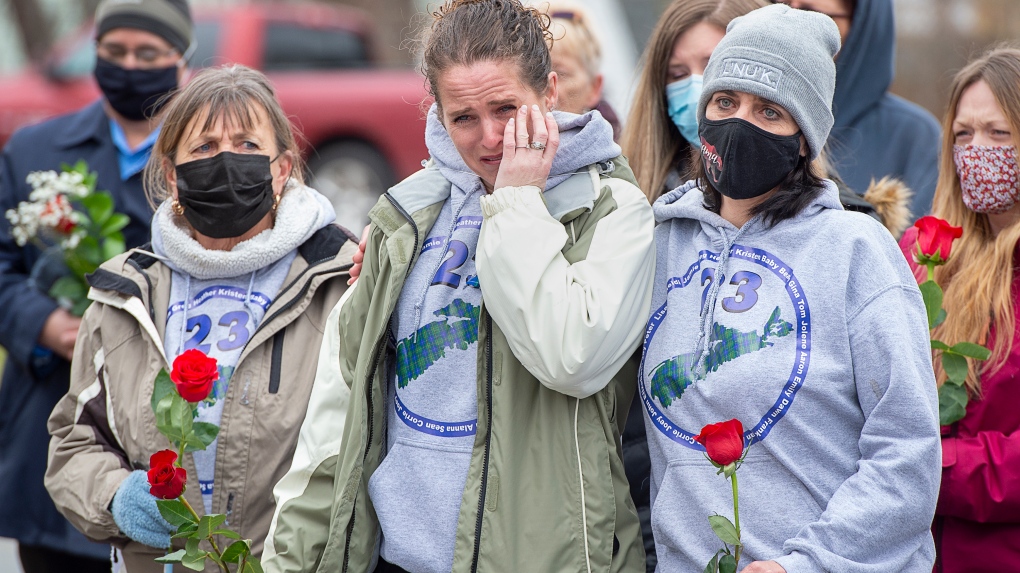 Family and friends of the victims of the April 2020 murder rampage in rural Nova Scotia, stand outside the RCMP detachment as they mark the one-year anniversary in Bible Hill, N.S. on Sunday, April 18, 2021.THE CANADIAN PRESS/Andrew Vaughan

TORONTO -- For Wayne Smith, pain is forged in iron and steel, but also in words.

What started as an outlet to channel his grief over the death of stepson Corrie Ellison is now a 680 kilogram sculpture that stands three-and-a-half metres tall and sits as a memorial in a public park in Truro, N.S.

Ellison was a victim of the mass shooting in Nova Scotia that killed 22 men and women, and one unborn child, a year ago on Sunday. Smith’s “Broken Heart Sculpture” carries Ellison’s name, along with the names of each of the other victims.

They were front-line health-care workers, an elementary school teacher, and an RCMP officer. They were sons, daughters, family, and friends.

"So many people want to grieve with them and that's why you see so many flowers, so many teddy bears," Smith said.

One year ago, the gunman, a denturist disguised as a police officer and driving a fake police cruiser, evaded authorities for some 13 hours as he shot multiple residents and set homes on fire in Portapique before terrorizing other communities in the region.

The rampage would become the worst mass shooting in modern Canadian history.

A year may have passed, but the path to recovery remains long and difficult for Leon Jodrey, who heard the shooting and witnessed the fires.

Jodrey still cannot bring himself to return to his home in Portapique where the events took place. He spent months in a psychiatric facility and continues to suffer from debilitating anxiety. Moving on and finding peace takes all his energy, he says.

"It's been just the same as it was three, four months ago for me. I haven't felt any better,” Jodrey said.

"Why I didn't get killed that night is hard to deal with when all my friends and neighbours did. And to wake up to the aftermath was just horrific."

It has been a year of sorrow, loss and recovery for families of the victims and survivors of the crime -- made even more difficult by the COVID-19 pandemic. It has robbed loved ones of their ability to properly mourn through funerals, memorial services, gatherings, or even the comfort of an embrace from a stranger with a shared grief.

"We all need that ritual piece in terms of the healing process and the grieving process itself,” said Valerie Kingsbury, a minister with the First United Church in Truro.

United by tragedy, survivors and families of the victims have supported each other, often from a distance. On Sunday, they will gather in remembrance of those who died.