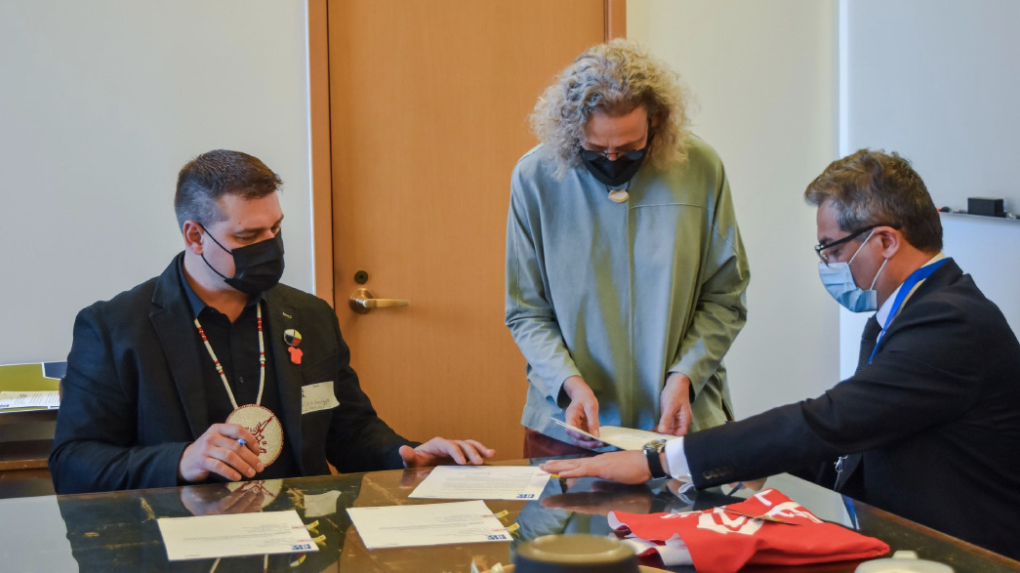 TORONTO -- The ancestral remains of six individuals have been returned home to Dokis First Nation in Ontario by the Field Museum in Chicago, Il., after being kept there for more than a century.

In a press release on the repatriation of the remains, Dokis First Nation said that they had worked closely with the museum for years in order to confirm the origins of the remains and facilitate a respectful return.

On Tuesday, a signing ceremony was held at the Field Museum to officially transfer the ancestral remains to the Dokis First Nation.

Julian Siggers, president of the Field Museum, said it was their “privilege to have welcomed representatives from the Dokis First Nation to the Field Museum for the important occasion of returning these ancestral remains to their descendant community.”

“We want to express our appreciation to all the wonderful staff, committees, and Board Members involved at the Field Museum,” said Dokis Chief Gerry Duquette Jr. in the release. “It was truly an honour working with everyone, especially Helen Robbins, to close this chapter in our history. The repatriation of these remains will guide their spirits home to peacefully join their ancestors, and we are proud to finally have completed what my late Grandpa Leonard Dokis started so many moons ago.”

Duqette and the community have been working on the “Dead Island Repatriation Project” for several years, working to bring ancestors home who were taken from their graves on Dead Island.

Dokis First Nation and the Field Museum discovered through collaborative research that the remains of the six individuals were first removed from their graves by anthropologist Thomas Proctor Hall in 1891.

The remains were taken by Hall on behalf of anthropologist Franz Boas to be shown in exhibits at the Chicago World’s Columbian Exposition of 1893, a fair held in Chicago to celebrate the 400-year anniversary of Christopher Columbus arriving in North America.

After the Exposition, the human remains became part of the museum’s collections, along with some of the other parts of the exhibit.

The Field Museum has an obligation to repatriate human remains and cultural objects to Indigenous communities federally recognized in the U.S., due to a law that passed in 1990 on protecting Indigenous gravesites. But the museum has also considered international requests for repatriation since 1989.