TORONTO -- Amid the growing violence in east Jerusalem and the Gaza Strip, supporters of the Palestinian solidarity movement held peaceful protests in cities across Canada on Friday and Saturday, ranging from small car rallies to massive marches of thousands of people.

In the nation's capital, thousands of demonstrators in support of Palestinians gathered at the Human Rights Monument near Ottawa City Hall and marched through the downtown streets.

"I’m worried every single day. Every time I see in the news there has been a bombing in Gaza or a strike in Gaza, my first instinct is to message my family and see how they are," rally attendee Nora Abushaban told CTV News Ottawa.

The Toronto protest was also met with a smaller group of pro-Israeli counter-protesters, with a barricade set up between the two groups by police.

On the West Coast, supporters of the Palestinians also gathered in Vancouver in a march organized by the Canada Palestine Association that ended at the U.S. consulate.

Around 200 people gathered in front of City Hall in Saint John, N.B., waving Palestinian and Canadian flags while holding signs calling for an end to the violence and the Israeli airstrikes.

"We want to show our support and solidarity for the basic human rights of these people who are living in Sheikh Jarrah, in Gaza City, in Palestine in general," rally organizer Helmi Alfarra told CTV News Atlantic.

The latest outbreak of violence in the region began in east Jerusalem last month, when Palestinian protests broke out in response to Israeli police tactics during Ramadan. Protests also arose after Jewish settlers have threatened the eviction of dozens of Palestinian families in the Sheikh Jarrah neighbourhood.

In response, Hamas militants in Gaza have launched rocket attacks at Israel, prompting retaliation from the Israeli military. At least 188 Palestinians have been killed in Gaza, including 55 children and 33 women, with 1,230 people wounded, as of Sunday morning. Eight Israelis have also been killed.

The rallies on Saturday coincided with what many Palestinians call "Nakba Day," which is commemorated on May 15 to mark the displacement of over 700,000 Palestinians after the creation of Israel in 1948. 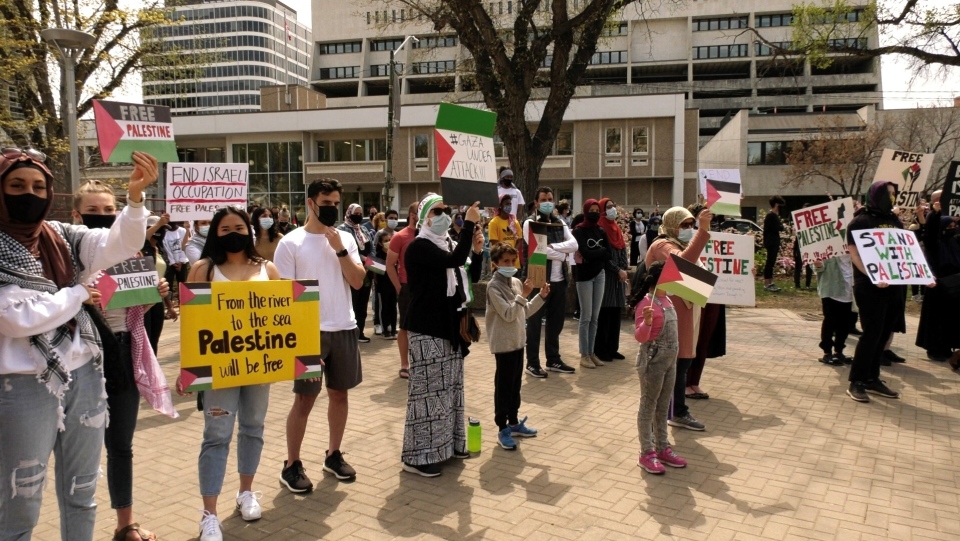 Hundreds also showed up in front of Saskatoon City Hall, chanting “free, free Palestine” and “the occupation has to go.”

“I’m here to support the Palestinians back home. Make our voices heard what’s going on and to give it attention,” rally attendee Omar Ash, who himself was born in the Palestinian territories, told CTV News Saskatoon.

With COVID-19 restrictions in mind, supporters of Palestinians in some communities held car rallies. In London, Ont., protesters assembled in their vehicles at a local mall parking lot before rolling onto the streets.

Hundred of cars participated in the rally, many with Palestinian flags attached to them. 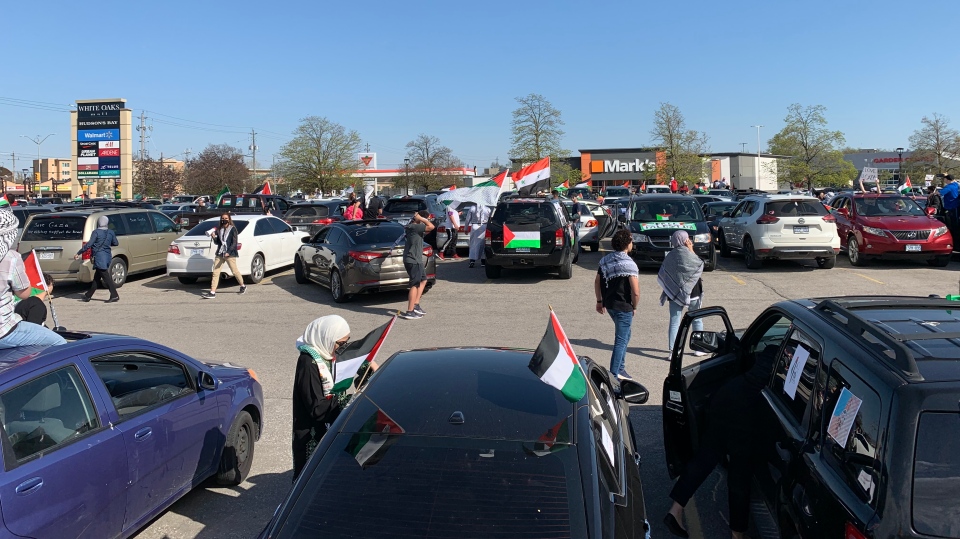 Hundreds of vehicles gathered at malls in London, Ont. to protest attacks against Israel’s attacks on Palestinians on Friday, May 14, 2021. (Bryan Bicknell/CTV News London)

A massive car rally was also held in Edmonton, which saw hundreds of protesters honking in their vehicles and waving Palestinian flags.

“There’s a lot of support for this right now, it’s getting harder and harder to hide the atrocities of Israel, people are here for basic human rights for Palestinians,” said rally organizer Mousa Qasqas in an interview with CTV News Edmonton.

Pro-Palestinian demonstrators held both a car rally and an in-person protest in Montreal. Hundreds of vehicles with Palestinian flags rolled through the streets of Montreal while thousands gathered in front of the Israeli consulate general in Westmount, Que.

Supporters of Palestinians in Waterloo Region, Ont. also resorted to holding a car rally after Waterloo Regional Police told organizers that an in-person rally would be in violation of COVID-19 restrictions.

“We want people that are not Palestinian to know and understand what’s happening in Palestine,” rally organizer Yazan Shaheen told CTV News Kitchener. “This is the same ethnic cleansing and dispossession of Palestinian people that we’ve seen in 1948 and here we go again, 73 years later, three generations later, we are seeing it happen again.”

Meanwhile, in Halifax, officers from the Halifax Regional Police issued fines and made arrests to some involved in a car rally at Saint Mary's University. Officers said the rally violated provincewide COVID-19 restrictions. Police say around 200 vehicles were involved.

"We just want to show the Palestinian people, the people in Gaza and the West Bank that we support then," rally participant Alaa Darwish told CTV News Atlantic.

Islamic nations slam Israel and each other's ties to it

A tough sell: In Dubai amid clash, Israel promotes tourism

What is the endgame for Hamas and Israel in new showdown?

Thousands protest in downtown Toronto in solidarity with Palestinians

Thousands protest for the 'liberation of Palestine' in Montreal