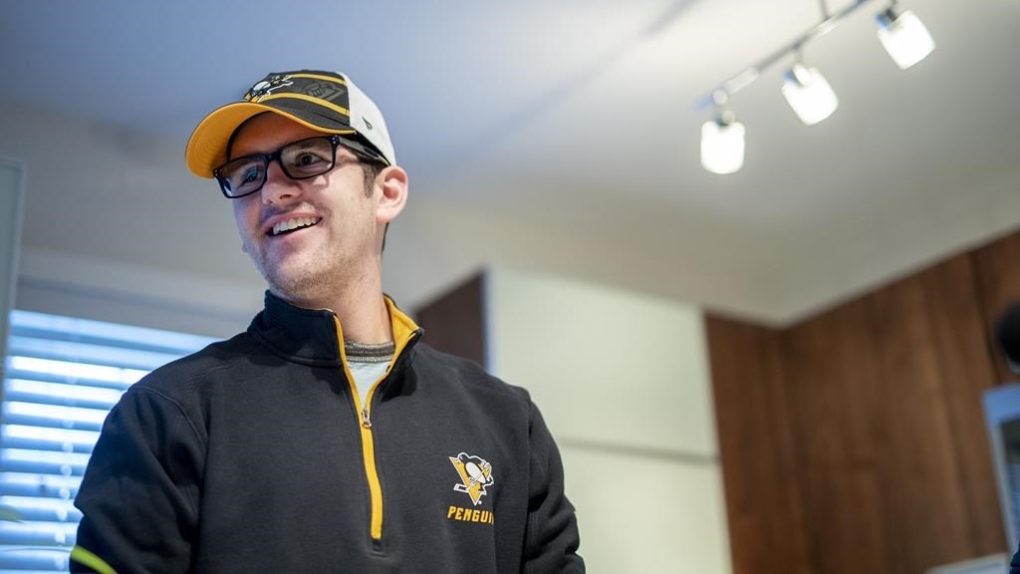 Tiny pieces of glass lodged in his body from shattered windows have been slowly working themselves to the surface of his skin. About 11 fragments sit in a jar, the latest from one of his fingers.

Another shard is starting to protrude through a bump on his right elbow.

The 19-year-old from Colonsay, Sask., isn't able to say much. After the April 6 crash, he spent a month in a coma with a serious brain injury and had to learn how to talk and walk again. He also has limited use of his right arm.

Sixteen people died and 13 were injured on the Saskatchewan junior hockey team's bus when it collided with a semi-truck that was in its path after blowing a stop sign at a rural intersection.

Matechuk and his family have been living in Saskatoon since then to be close to his medical care and therapy.

"Good," Layne says with a smile when asked how he's feeling during an interview at the family's rental condo.

Once the conversation turns to hockey, he lights up. He's wearing Humboldt Strong bracelets on both wrists and an NHL Pittsburgh Penguins hat and jacket he was given on a recent visit to the city.

"From Crosby," he says, referring to Penguins captain Sidney Crosby.

He has no memory of the crash or the six months that followed, says his father, Kevin Matechuk.

"He doesn't remember the accident and he never will, and we're very, very thankful. When he thinks about it, he's sad because he lost his billet brother in the accident and lots of good friends."

"He wants to talk to the families. He just wants to get his speech back. But he knows his life has changed drastically."

Before the crash, Matechuk got a tattoo on the inside of his right arm with the initials PMA to remind him of keeping a positive mental attitude. A series of Chinese characters spell out strength.

The tattoos helped his family identify him in the hospital, since he also had serious injuries to his face.

Since then, Matechuk has added more tattoos to his right arm -- the word "Believe" with his jersey number, 28. His father got the same one inked on his arm.

His dream of playing professional hockey is over, but Matechuk is hoping to be well enough to play in a recreational league next season. He was back on skates in January and has been working since then on his slapshot.

His smile keeps the family going, says his father.

"He works so hard. The progress is just steady and that gives us a lot of strength," he says.

With summer approaching, Matechuk plans to do some surfing and wakeboarding at his family's cabin on Emma Lake near Prince Albert, Sask.

Sticks out for Humboldt: Canadians mark one year anniversary of deadly crash

'She just comforts us:' Mother says baby named after Broncos player a gift

'Down on my knees:' Grief and sadness an obstacle for many after Broncos crash

'It still knocks you down:' First responders reflect on Humboldt Broncos crash

'Play until you can't': Bronco focuses on sledge hockey instead of anniversary