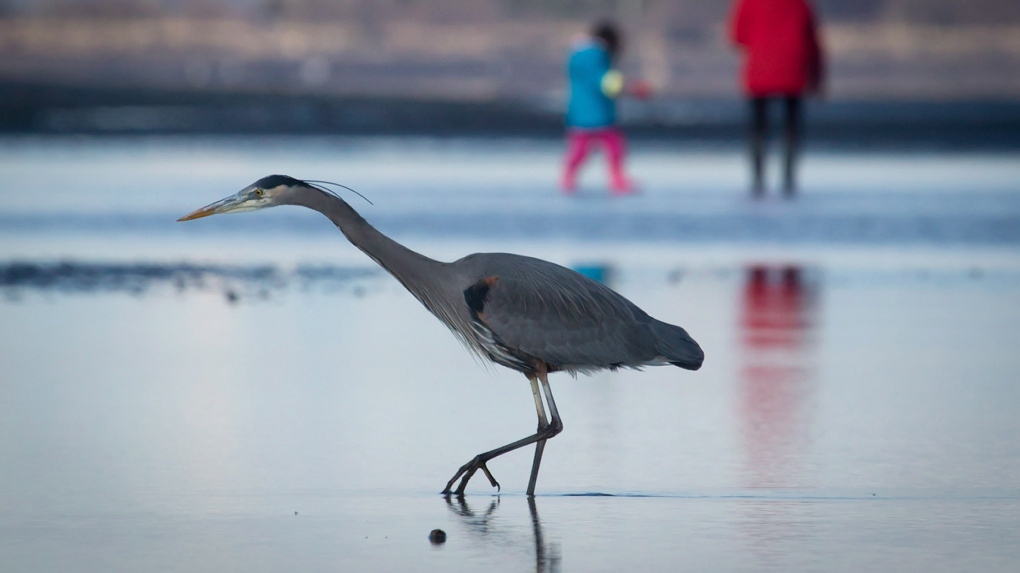 A Great Blue Heron looks for food in a tidal pool as a woman and child walk along Centennial Beach during low tide at Boundary Bay Regional Park in Delta, B.C., on February 15, 2013. (Darryl Dyck / The Canadian Press)

CALGARY -- The Alberta Energy Regulator has charged Syncrude Canada in the deaths of 31 great blue herons two years ago at its Mildred Lake oilsands mine in northern Alberta.

The company is charged under the provincial Environmental Protection and Enhancement Act with failing to properly store a hazardous substance in a way that ensures it doesn't come into direct contact with or contaminate animals.

Spokesman Will Gibson said Syncrude is reviewing the charge to determine its next step but has already made changes to better protect birds on site.

"This has strengthened our resolve to make sure that bird deterrent systems are everywhere they are needed on our site," he said, adding Syncrude's plan previously focused mainly on its tailings ponds, which store water contaminated with oil, chemicals and clay from its oilsands processes.

"Our waterfowl protection plan now addresses incidental bodies of water which includes areas such as sumps where the dead herons were found."

He said he didn't know what caused the death of the birds at the sump, which he described as an inactive dugout near a pump station.

Syncrude was previously fined $3 million for an incident in 2008 when more than 1,600 ducks died after landing on a tailings pond.

Two years later, more than 550 birds had to be killed when an early winter storm forced them to land on waste ponds belonging to Syncrude and Suncor Energy.