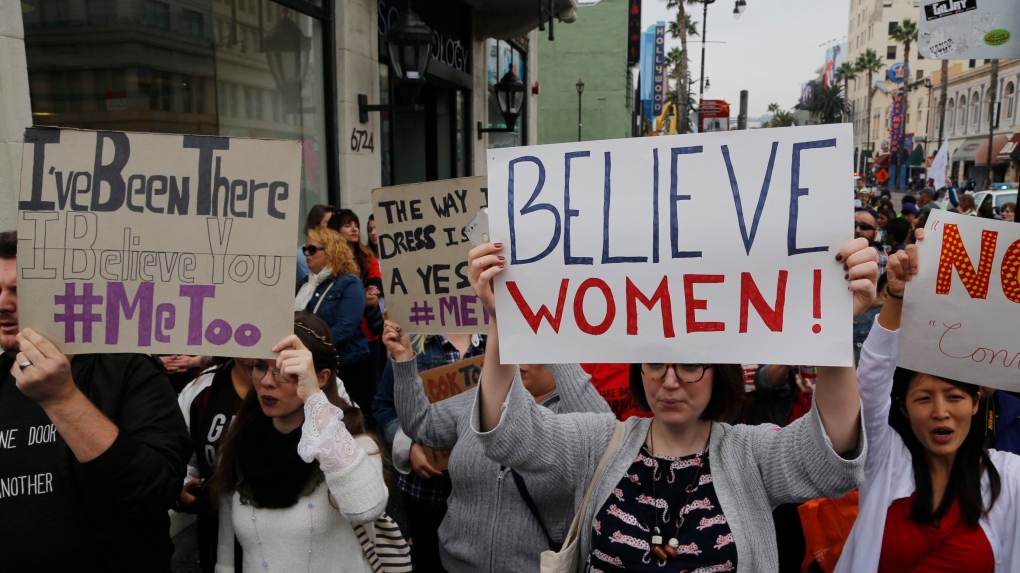 Participants march against sexual assault and harassment at the #MeToo March in the Hollywood section of Los Angeles on Sunday, Nov. 12, 2017. (AP Photo/Damian Dovarganes)

MONTREAL -- The number of sexual assault complaints filed with police and classified as founded increased sharply in Canada after the #MeToo movement went viral in October 2017.

The increase was most pronounced in Quebec, a study published Thursday by Statistics Canada.

Quebec saw the largest increase in sexual assaults reported to police, rising 61 per cent after .MeToo. The rate jumped to 20 complaints per 100,000 population from 12.4.

Newfoundland and Labrador saw the second highest increase, rising 36 per cent, and Manitoba was next at 27 per cent. The other provinces and territories were below the national average increase of 24 per cent.

Nationally, the figures show an average of 74 sexual assaults reported to police per day after .MeToo, compared with 59 per day before.

The study looks at sexual assaults reported to police that were subsequently deemed to be a founded criminal offense. It does not include all complaints, and the accusations have not necessarily led to criminal charges.

"This sharp increase in police-reported sexual assaults following the #MeToo movement does not necessarily reflect a rise in the prevalence of sexual assaults in Canada, but is likely attributable to a combination of factors, including an increased willingness of victims to report to police," the study's authors wrote.

Other factors include heightened awareness of what constitutes sexual assault, public messages from police forces urging victims to come forward, and changes in police practices when it comes to classifying sexual assaults as founded or unfounded.

The rise was most marked in Quebec, where several high-profile cases of alleged misconduct led to sustained media and police attention.

"For example, in October 2017, the Montreal Police Service implemented a dedicated hotline for reporting sexual assaults in the wake of #MeToo and high-profile accusations of sexual assault and harassment, both internationally and within Quebec," the report stated.

Marie-Christine Michaud, the spokeswoman for a crime victims' assistance centre, said the movement played an important role in encouraging victims who had previously been reluctant to come forward.

"The message that was sent, people felt that if they denounced or went for help, we would believe them," she said.

The report noted that 2017 recorded the highest-number of police-reported assaults since 1998, due in large part to the spike in reports in the last three months after #MeToo began.

And contrary to assumptions that most complaints stemmed from long-past incidents, three out of four complainants were reporting incidents that had occurred within the previous month.

The biggest rise in complaints occurred in urban areas, with Quebec City topping the list with a 78 per cent increase. Sherbrooke, Que. came second, while Brantford, Ont. recorded the third-biggest hike.

Nine out of 10 victims were female.

And the number of reported assaults on school campuses -- while still a minority of reported cases -- rose by 59 per cent.

What was the impact of the #MeToo movement in Canada? Our new Juristat article compares police-reported sexual assaults in Canada before and after #MeToo: https://t.co/pCadVcBy52 pic.twitter.com/44azF8JO3Z