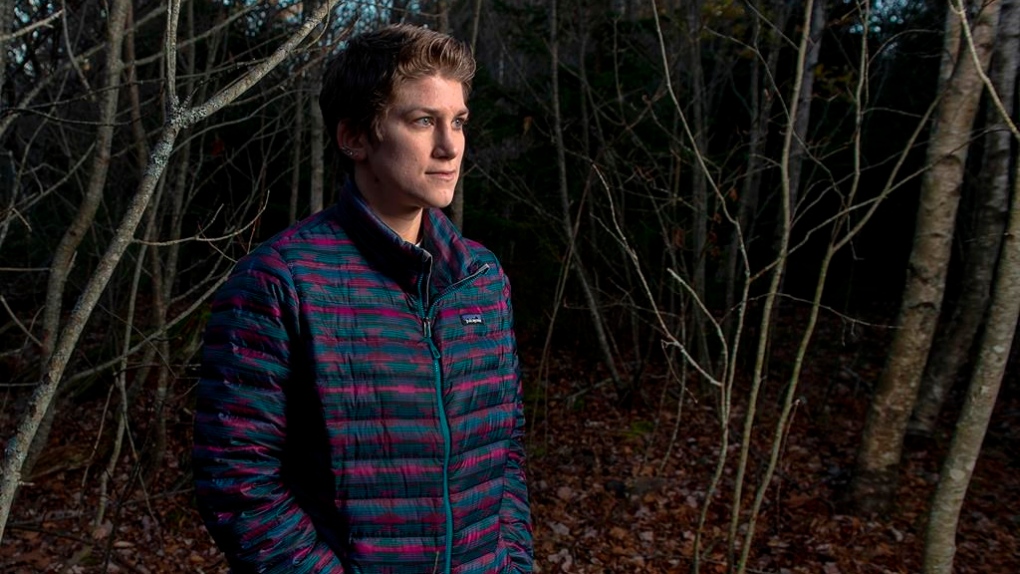 Kirby Morrill poses for a photo at Point Pleasant Park in Halifax on Tuesday, Nov. 26, 2019. THE CANADIAN PRESS/Andrew Vaughan

MONCTON, N.B. -- Kirby Morrill has loved sports since she was a young girl. At the University of New Brunswick, she was a rugby star, celebrated for her "off-the-charts" tackling. But for close to a decade she had dreamed of another physical achievement -- hiking the 3,500-kilometre Appalachian Trail.

Stretching from Springer Mountain in Georgia to Mount Katahdin in Maine, the trail is a daunting challenge, and only about one in four hikers who set out to cover the full distance reach the end.

"Everyone in New Brunswick knows about Mount Katahdin," Morrill, 28, told The Canadian Press in a recent interview. She said that after learning that the mountain was the northern terminus of the famed trail, "I started to look at the Appalachian Trail and added it to my list of things to accomplish in my life."

In March, after defending her Master of Science thesis, Morrill flew from Halifax to Atlanta to begin a solo hike that, if all went well, would get her to Maine by fall.

Soon, though, her life would change forever. An attack by an armed man at a campsite would leave a fellow hiker dead and Morrill gravely injured and fighting for her life, forced to hike 10 kilometres through the darkness to find help. Others in the hiking community say her story of determination and survival inspired them to forge on. And as she continues to recover from her injuries, she is already planning a return next year to finish what she began.

Back in May, a mobile app used by hikers had been buzzing with talk of a hiker who was threatening people on the Appalachian Trail. Warnings and descriptions of the man and his dog had been posted. By May 10, Morrill, who grew up in rural Belleisle, N.B., had passed the quarter-way point, and all was going well -- aside from the recent loss of her food to a scavenging bear.

"I stopped at a restaurant because another hiker was going to meet me there with a new food bag for me," she recounted. Seated at the restaurant, she saw the hiker she now refers to as "the crazy guy with the knife" walking down the road.

"I left a note at the register at the restaurant to warn people. I figured my best bet was to get past him and continue on without having to see him again," she said.

That evening, Morrill chose a campsite where three other people were staying, including Ron Sanchez, a hiker she had met days earlier during her ordeal with the bear.

"He was really comforting. He was a really great guy," she said. "I really appreciated him, so it was nice to see him at that campsite again."

The peace was soon shattered when the threatening hiker she had seen in town showed up.

Morrill is guarded about what she says about the ensuing hours in case she has to testify in court.

"As far as I know he didn't have a tent, and he wandered around the campsite talking to himself," she said. He sang to himself for half an hour by the campfire. "And then he came around to the tents threatening to kill us in a variety of ways and telling us why we deserved to die," she said.

Morrill said the intruder retreated into the woods, and she decided she would pack up and leave. The other three hikers decided to do the same, and all were in the process of gathering their belongings when the man returned.

Morrill said two others managed to escape, but she and Sanchez were confronted. She said Sanchez was attacked first. The 43-year-old U.S. Army veteran from Oklahoma would later die of his injuries.

"I was pinned. Because we had packed up and tried to get out of there with all our things, I had everything on me. I had a 30-something-pound pack on my back, and when he came at me, he came at my front, so I fell onto my back like a turtle, and he was on top of me," she said. "There was nothing I could do."

It was pitch dark, and Morrill said she believes at some point her attacker thought she was dead.

"He had fallen on top of me and switched from stabbing at me to beating on the side of my head. So I held my breath and I held still," she said. "Eventually he stopped and he got up and stood over me for what felt like forever. I tried not to breathe."

The attacker eventually left, and she was able to get up, deciding to head south along the trail to where she knew other hikers would be camped, about 10 kilometres away. She didn't immediately realize the extent of her injuries.

"I had so much adrenaline coursing through me at that point, I barely felt it. It was just kind of a general feeling of badness, like something is wrong here," she said.

"I knew immediately my right arm didn't work. My left arm wasn't working very well at all, and after I got up and started moving around, every time I took a step there was (blood) spurting from my leg."

Despite her injuries, Morrill walked as quickly as she could, blood streaming down her face. After about a kilometre on the trail, she tried to use duct tape to patch her leg, but there was too much blood and only one of her arms was working. Dropping the blood-soaked tape on the ground, she felt a tinge of guilt because the hikers' credo is to leave the trail as they find it.

It took Morrill about three hours to hike to the next camp. She was flown from Wythe County, Va., to a hospital across the state line in Tennessee. She said she had nine stab wounds and 40 individual lacerations, requiring about 50 staples and 10 sutures across her face. "I look like scarface now," she said, smiling.

She said she has been spared survivor's guilt. "I actually believe I made the best decisions I could. I might not be happy with the results, because we lost Ron. That's the hardest part for me because he was a great guy," she said, her voice breaking, "but I don't think I could have helped him any more than I did."

James Jordan, 30, of West Yarmouth, Mass., was arrested in the hours after the attack and charged with murder and assault with intent to commit murder. He is undergoing treatment after being found unfit to stand trial by a federal judge in Virginia in July.

Shortly after the attack, a man who publishes a hiker yearbook for the Appalachian Trail said Morrill's strength and courage inspired other hikers to continue their trek. But Morrill is reluctant to accept any praise.

"I'm happy if it helps some people cement their decision to stay on the trail, especially since I understand that it's the mental component of hiking the trail that's the hardest for people ... but there's nothing special about me," she said.

Recovery has been slow, involving painful physiotherapy, exercise and weightlifting in an effort to restore feeling and the use of various muscles, especially in her arms.

Despite the discomfort, Morrill was back on the Appalachian Trail in September, although just for a day. While recovering in hospital, she had promised two hikers she had met on the trail she would join up with them when they reached Mount Katahdin.

"We went up Katahdin together," she said. "I started the trail and I finished the trail. I just skipped a big part in the middle." Morrill said she had to fight not to cry as she reached the peak.

But that wasn't the end of her journey. Morrill plans to head back to the Appalachian Trail in March -- not just picking up where her first attempt was cut short, but starting anew at Springer Mountain.

"I always wanted to do the whole trail from end to end, and I didn't get to do it," she said. She'll be carrying emotional baggage along with her pack.

"It's not the kind of thing you walk away from unscathed," she said. "But I can say I am doing blissfully better than I might have expected. I'm doing surprisingly fine."