After killing 5 across the East Coast, Isaias has made its way to Canada 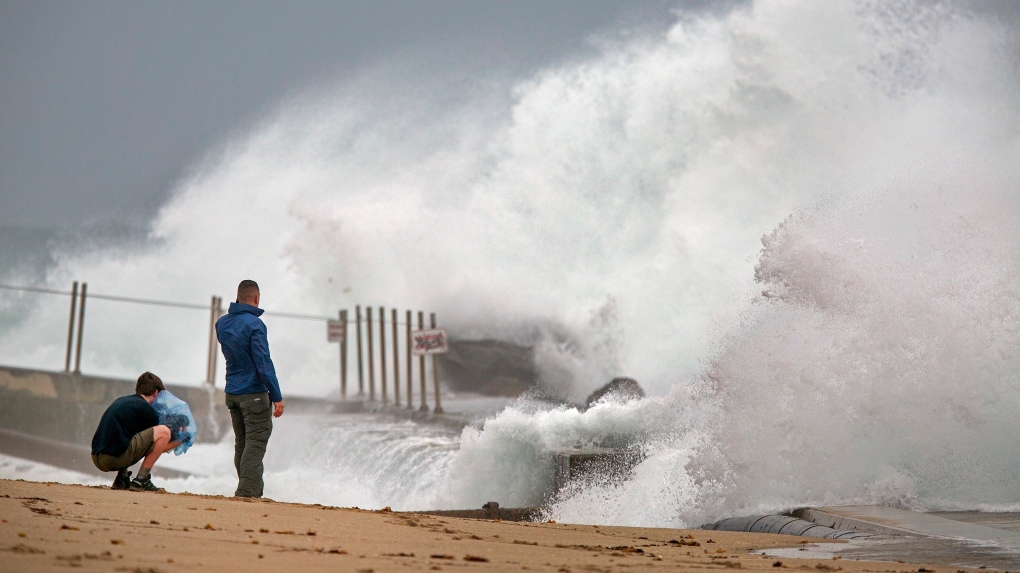 Waves are driven by Tropical Storm Isaias crash over the jetty on the north side of the Palm Beach Inlet in Palm Beach Shores Sunday, Aug. 2, 2020. (Lannis Waters/The Palm Beach Post via AP)

Isaias, now a post-tropical cyclone, has moved into southeastern Canada, bringing heavy rain and powerful winds over the province of Quebec.

The storm's maximum sustained winds are now about 40 mph and it is expected to get weaker, the National Hurricane Center said, adding the storm is likely to dissipate Wednesday night or Thursday.

A wind advisory was in effect for all of eastern and Northern Maine until early Wednesday morning, according to the National Weather Service in Caribou.

"We are seeing numerous reports of Gusty Winds 35-45mph within Showers & behind the precipitation. We could see gusts as high as 50mph. This may cause downed trees on power lines," the service said on Twitter.

The storm system killed several people as it ripped through the East Coast after making landfall as a Category 1 hurricane on Ocean Isle Beach, North Carolina, Monday.

At least two people were killed when a tornado struck a mobile home park in Windsor, North Carolina, Bertie County officials said. Twelve people were injured and taken to hospitals.

In St. Mary's County in southern Maryland, the driver of a car died after a tree fell on the vehicle's roof. The weather service reported at least three separate tornadoes occurred in the southern part of the state early Tuesday. Two were in St. Mary's County while the other was in Calvert County, the service said.

Mario Siles, 60, was found inside a 2014 Dodge van "with trauma about the head and body," and pronounced dead at the scene, a New York Police Department spokeswoman said. In Delaware, an 83-year-old woman was found under a large branch in a pond near her home, Cpl. Jason Hatchell with Delaware State Police told CNN.

Across the region, nearly three million people were in the dark early Wednesday morning, according to poweroutage.us, including more than 800,000 in the state of New York.

"Our parking lot flooded," Brittany Austin told the news station. "So, for me to get the children to the parents, who had to park as soon as they came in the parking lot, I had to sludge my way through a good 6 feet of water to get them out to the parents."

As the storm moved to Canada, it left in its wake flooded US neighborhoods and residents cleaning up the damage.

In Eastwick, Philadelphia, some residents were told to evacuate their homes as streets transformed to rivers Tuesday, CNN affiliate WPVI reported.

"I was sitting in my living room and I was telling my husband water is coming through the back," Tanya Andrews told the affiliate. "It was already flooded. Then the police captain came and told us to evacuate. My house is flooded."

In the northeastern part of the city, roofs were torn off, wires were on the ground and residents told the news station they saw powerful winds ripping trees off the ground.

"Something out of a movie, that's the only way I can explain it," one resident told the news station.