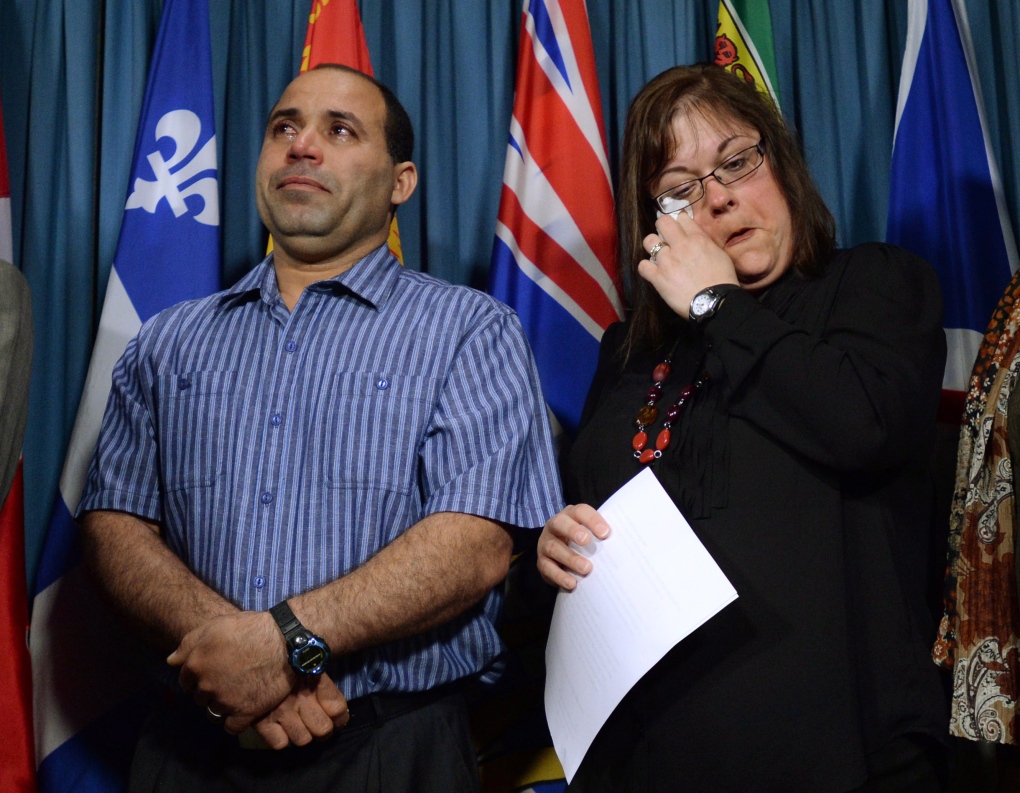 Mohamed Harkat and his wife Sophie Lamarche Harkat take part in a press conference on Parliament Hill in Ottawa on Thursday, May 15, 2014. (Sean Kilpatrick / THE CANADIAN PRESS)

OTTAWA -- Amnesty International says Mohamed Harkat faces serious mistreatment if he is returned to his native Algeria and it joined the Ottawa man Thursday in urging the Trudeau government to halt his deportation.

Harkat, a former pizza delivery man, was taken into custody 13 years ago on suspicion of being an al-Qaida sleeper agent -- an accusation he denies.

The federal government has been trying to deport the Algerian refugee on a national security certificate -- a seldom-used tool in immigration law for removing non-citizens suspected of extremism or espionage.

Harkat, 47, fears he will be tortured if forced to leave Canada.

"I love this country and I came here for a better life," he said during a news conference.

"I just want my life back."

Amnesty International's research suggests a return to Algeria could put Harkat at serious risk of being placed in "incommunicado detention," meaning he would be denied access to family, legal counsel or an independent doctor, contrary to international human rights law, said Hilary Homes of the organization's Canadian branch.

People suspected of terrorism-related offences are often detained by the Algerian security forces and denied contact with the outside world, sometimes for prolonged periods, she said.

"Effective safeguards against torture or ill-treatment in Algerian law and practice are lacking and security forces continue to enjoy impunity for their acts of torture and ill-treatment of those they detain," she told the news conference.

"It's time for Canada to do the right thing and stop trying to deport Mohamed Harkat."

Harkat's lawyers have long argued the security certificate process is unfair because the person facing deportation doesn't see the full case against them.

The Supreme Court of Canada upheld the certificate against Harkat last year and the government has since taken initial steps toward removing him.

Amnesty is concerned the federal government might rely on Algerian assurances that Harkat would not be mistreated in ultimately deciding to return him, Homes said.

"Such assurances from governments with a poor human rights record are inherently unreliable and do not provide an effective safeguard against torture or ill-treatment."