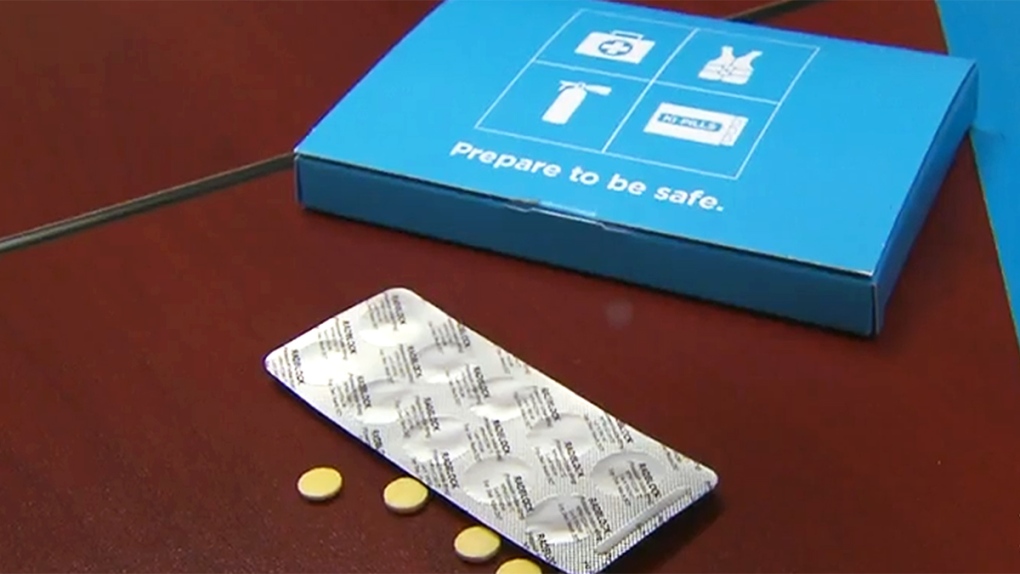 Potassium iodide pills were sent to about 200,000 households and businesses around the Pickering, Darlington and Bruce nuclear stations in October of 2015.

TORONTO -- Environmentalists want the Ontario government to provide evidence for its 10-kilometre limit around nuclear power plants for distribution of potassium iodide (KI) pills that help fight radiation, and say it should be expanded.

Greenpeace and the Canadian Environmental Law Association filed a request under the Ontario environmental bill of rights asking the ministry of health to do an evidence-based review of the policy surrounding distribution of the KI pills.

Radioactive iodine is released in the event of a nuclear accident, and the potassium iodide pills can help protect against thyroid cancer.

The pills were sent to about 200,000 households and businesses around the Pickering, Darlington and Bruce nuclear stations in October, and were given to another 12,500 people who asked for them.

Greenpeace spokesman Shawn-Patrick Stensil says the 10-kilometre distribution zone in Ontario was established in 1984, and notes New Brunswick has a 20-kilometre zone while Switzerland uses a 50-kilometre area for distribution of the KI pills.

Stensil believes the evidence will show the distribution zone for the pills should be expanded to as much as 50 kilometres.

"Four years after the (2011) Fukushima disaster in Japan -- cancer takes a while to develop -- a study found increased incidences of thyroid cancer 50 kilometres from the plant," he said. "All we're saying is let's make the decision based on evidence."

Greenpeace says a little-used section of Ontario's environmental bill of rights requires a government response to their request for a medical review of the policy, and if it refuses, the environmental commissioner must investigate and report to the public.

Last week, the city of Toronto's executive committee asked the medical officer of health and office of emergency management to investigate the "appropriateness" of the 10 kilometre zone at nuclear plants and whether it should be expanded to 50 kms.

The province initially balked at the Canadian Nuclear Safety Commission's order to distribute the pills, insisting the federal regulator didn't have jurisdiction to issue it, so the CNSC made it a condition of renewing licences for Ontario's nuclear plants.

"The federal regulator stepped into the provincial realm because it felt Ontario was avoiding its responsibility to protect the public in the event of a nuclear accident," said Stensil.