Accused in Edmonton Mac's shootings a 'risk to the public': Parole board 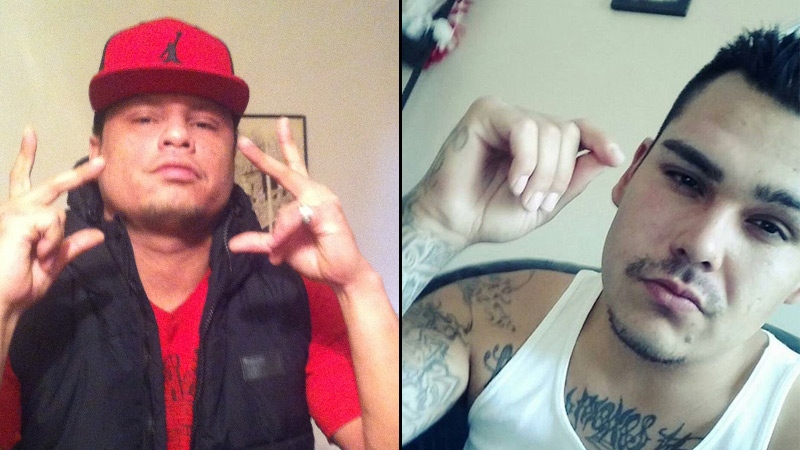 Colton Steinhauer, 27, and Laylin Delorme, 24, are shown in a composite photograph. Supplied.

EDMONTON -- Parole board documents say one of three people charged with killing two convenience store clerks in Edmonton was a drug dealer with gang ties who was prone to violence.

The board noted that Laylin Delorme made attempts to improve himself behind bars, but his continued allegiance to gang life left the panel doubting his commitment to change.

Delorme, 24, was sentenced in January 2011 to two years in prison for several offences that included selling crack cocaine and a car jacking in which he hit a driver in the head with a gun.

The board said that while behind bars, Delorme was an active gang member.

"Your institutional behaviour has been poor with involvement in the gang subculture, violence, substance abuse and threats to other inmates," the board wrote later that year when it denied him day parole. "Your release at this time would present undue risk to the public's safety."

Delorme completed the sentence in 2013 and served several short stints in jail for offences including mischief and assault with a weapon, before his arrest last Friday.

He, along with 27-year-old Colton Steinhauer and a 13-year-old boy, are charged with first-degree murder, robbery and other offences stemming from the deadly holdups.

All three appeared in court for the first time on the charges early this week. Delorme and Steinhauer had yet to retain lawyers.

Police said two clerks working alone in two different Mac's stores were shot dead minutes apart by masked robbers who made off with small amounts of cash. Video footage showed the clerks had been co-operating before they were gunned down.

Court records show the teen, who can't be named, is also facing charges from earlier this year that include robbery and weapons offences. On Nov. 20, he was released from custody with conditions that included he live with his grandmother.

At the time of the Mac's killings, Steinhauer was wanted on warrants for failing to comply with a probation order. He was sentenced in June to three months in jail for uttering threats.

The parole board documents detail how Delorme was raised by his parents in a home "free from any type of abuse," but he rebelled and started drinking and smoking marijuana at 15. He moved in with friends and was expelled from school in Grade 9.

He first started committing crimes at 19.

Delorme told the board he wants to build a relationship with his young son and admitted his crimes were influenced by drugs and gangs. He also successfully completed an aboriginal healing program while in prison.

The board said Delorme appeared to be genuine, but couldn't explain why he wouldn't leave the gang.

"This leaves concern for the board about your true allegiances."

Delorme was given statutory release in April 2012, after serving two-thirds of his sentence. The board said he was employed and co-operating with his parole officer.

But it revoked his release in January 2013, after finding out he was associating with a street gang. His name was on the lease of a home, a known gang "crash pad," that had exploded a month earlier, the board said. One person went to hospital with serious injuries.

"The board finds that through your actions while on release, your risk escalated and became unmanageable."