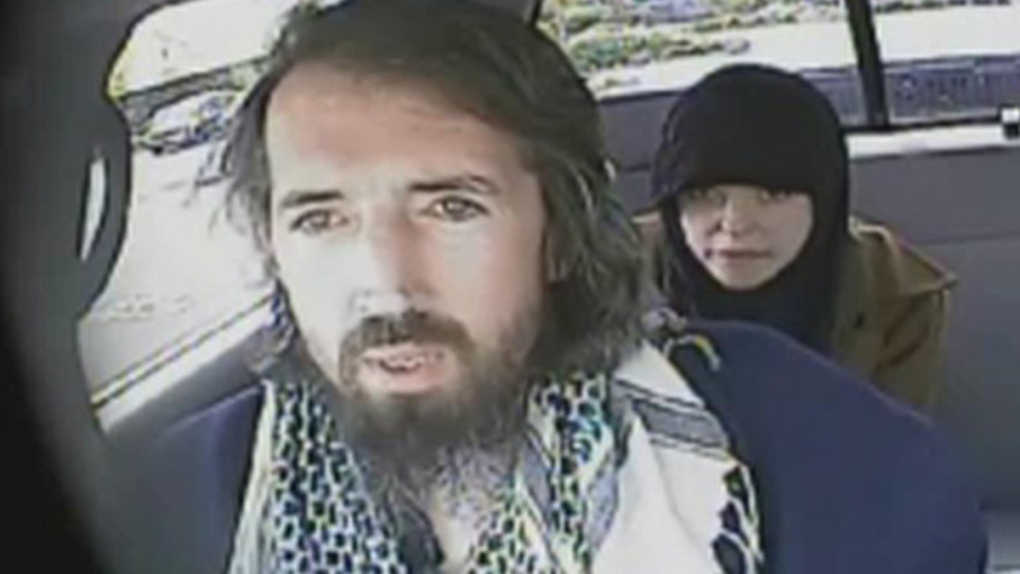 VANCOUVER -- An accused British Columbia terrorist calmly dismisses the killing of women and children as "collateral damage" while he and an undercover police officer drive around Victoria scoping out possible targets to attack.

In a video recorded May 2013 and played for a jury on Wednesday, John Nuttall says the slaying of bystanders is OK as long as it is not done on purpose.

"Muslim women and children, they get killed (by Western forces) all the time in the holy lands," says Nuttall, a recent convert to Islam.

The recordings were part of a months-long undercover RCMP sting involving more than 240 police officers.

In video taken on a return ferry trip from Victoria, Nuttall reclines with his eyes closed in the front seat of a parked pickup truck as he dictates his final will and testament to his wife and co-accused, Amanda Korody.

Nuttall outlines that he wants to be buried on his right side in a grave facing Mecca.

"I do not want to have any wailing women or crying," he says, speaking slowly. "Nor should anybody rip their clothing, slap their faces or any other such nonsense."

Nuttall begins to snore lightly before waking up with a start and asking Korody what she has written so far.

He adds that he will leave his paintball equipment to the man he doesn't know is an undercover officer, trusting he will deliver it to jihadist fighters to use for training.

Nuttall and Korody have pleaded not guilty to four terrorism-related charges related to an alleged plot to blow up the B.C. legislature on Canada Day.

In video taken earlier in the day, Nuttall is shown taking out a map of Victoria and highlighting potential targets to another person, also an undercover officer, whose role is to drive the couple around the city.

Nuttall picks out Canadian Forces Base Esquimalt and the Bay Street Armoury, which he believes is a storage facility for government tanks.

He also targets the B.C. legislature, which will ultimately become the focus of an alleged plan to detonate three homemade pressure-cooker explosives on July 1, 2013.

But at the time of the video, Nuttall's plan was to construct and fire off homemade rockets, attributing his inspiration to Palestinian rocket attacks on Israel.

In the video, an undercover officer then watches as Nuttall takes a pen to fill in the lines of a Star of David supposedly hidden on a five-dollar bill.

"You think that's by accident?" Nuttall asks the man he believes is an al Qaeda agent, gesturing to the Jewish symbol from the back seat of a pickup truck.

"It's not an accident," Nuttall says.

Nuttall continues on a tirade against the "Zionist-occupied" Canadian government, asserting that Canada gives $6 million a day to help Israel kill Palestinians.

In her cross-examination of the Crown's star witness, Nuttall's lawyer Marilyn Sandford periodically stopped the recordings to question the undercover officer, whose identity is protected by a publication ban.

Sandford asked the officer about telling Nuttall that "Everything is in the hands of Allah" "You have to follow your heart" and "If Allah doesn't want you to do something you won't do it."

The officer said his comments were part of an undercover ruse to determine the seriousness of the couple's alleged plot.