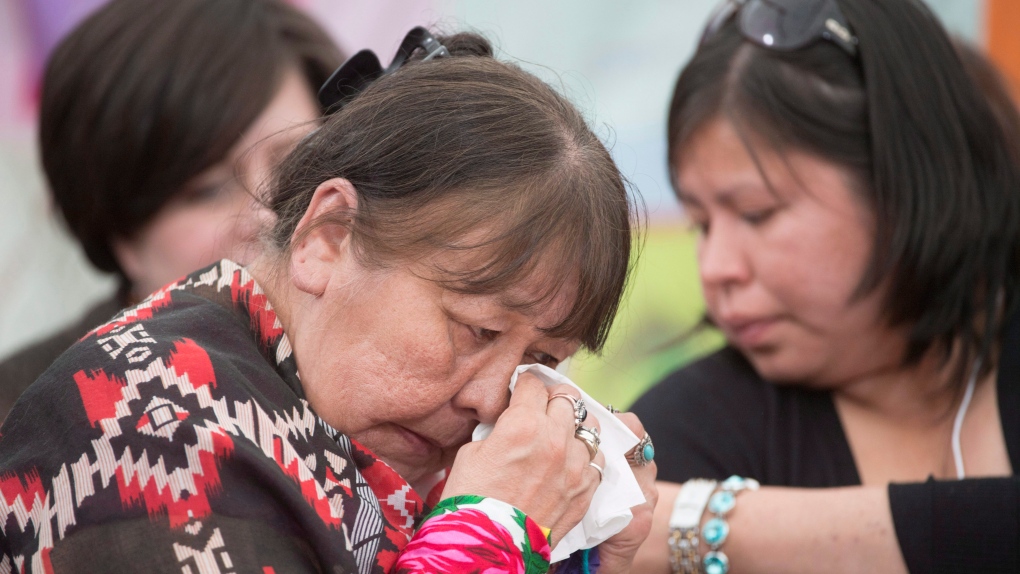 In this file photo, Bella Bresse wipes away a tear as she speaks about her murdered daughter, Evangeline Billy, at the National Inquiry into Missing and Murdered Indigenous Women and Girls taking place in Whitehorse, YT., May 31, 2017. (Jonathan Hayward/The Canadian Press)

That’s according to a new report from Statistics Canada released Tuesday that says Aboriginal women in Canada are 2.7 times more likely to face violence than non-Aboriginal women.

In fact, the growing proportion of female Aboriginal murder victims has gone from nine per cent of all female homicide victims in 1980 to 24 per cent in 2015.

The findings are part of a broader overview examining women and the criminal justice system in Canada, including female victims as well as female perpetrators.

Women account for more than half of all victims of violent crime in Canada, while they make up only about one-quarter of all offenders, according to the report.

The agency says that violence against women impacts everyone and acts as a barrier to gender equality.

They based their results on self-reported victimization data and police-reported crime data gathered since the early 2000s.

“Not all incidents of violence come to the attention of police,” the report read.

As violent crime rates committed by men have decreased by 17 per cent since 1998, the study found that charges against women rose by 27 per cent from 1998 to 2001 and have stayed nearly the same in the time since.

However, women only accounted for fewer than one in five people under community correctional supervision and one in 10 admitted into provincial or federal custody in 2014 and 2015.

They also noted that Aboriginal women only represent less than five per cent of Canada’s total female population while they made up more than one-third of female admissions to federal and provincial custody in 2014 and 2015.