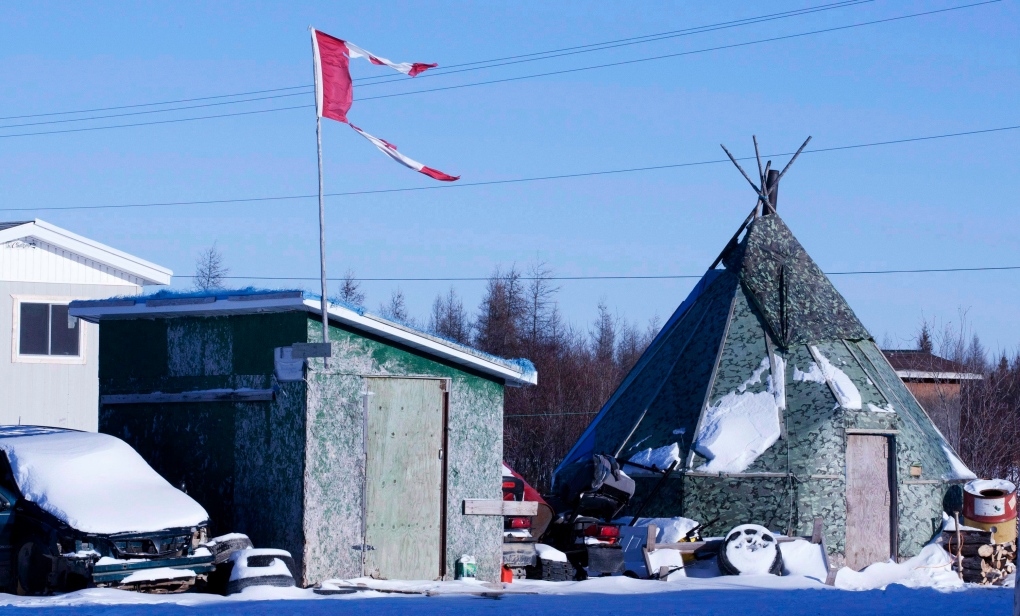 The remains of a Canadian flag can be seen flying over a building in Attawapiskat, Ont., on Nov. 29, 2011. (Adrian Wyld / THE CANADIAN PRESS)

After spending the majority of his adult life around software and IT, Acco's latest project has been to develop an accounting program intended specifically for aboriginal communities.

The result is the Native Economic Management System. It was created by Acco, co-founder of the native consulting firm Acosys Inc., and the economic-development commission in Kahnawake, a Mohawk community across the St. Lawrence River from Montreal.

"This is what I like about this system," he says repeatedly, while IT technician Sose Canadian clicks from link to link to offer examples of how a native community can gain better control of its finances.

Native finances have been thrust into the public spotlight over the last two years, since the Ontario community of Attawapiskat declared a state of emergency and fell into third-party management.

The federal government subsequently audited the community in September 2012. According to the controversial Deloitte audit, which cost the government $400,000, over 80 per cent of the $104 million provided to the community since 2005 was missing an adequate paper trail.

Acco says the problem often isn't that a community has wasted money -- but simply that it doesn't have a proper accounting system.

The NEMS system, which is first being used in Kahnawake, aims to track costs.

Canadian clicks on one link to show how a training program can be added to a community member's profile, much like adding a school to a Facebook profile.

Different governments, including First Nations ones, can now see how much a program cost, who used it, and what opportunities it led to.

"They know how much money they have spent on (someone) because they have this historical record," said Acco. "It's better management of money because you can actually show the federal government this progression."

In another example, suppose a railway is offering a program for returning native veterans. The offer can be added to the system and returning vets in the community can be contacted.

What if a film production needs hair and makeup interns? The commission can contact those who have experience in the community, based on their profile.

And, eventually, the federal government might ask in an audit where money was spent. The community's programs are logged in the system, along with the price tag.

Acco and Canadian add a training program to a user's profile. Now if that person returns with no job in the future, the local government can check to see if other graduates found work and, if not, ask why to those offering the program.

"I think it is empowering the community in terms of being able to justify the costs. Because, often, they fall into third-party receivership without any justification, or they don't have the power to justify why they spent the money they did," said Acco.

As of April, there were 161 First Nations communities receiving management support with 14 of them fully under third-party management.

The federal government has also passed the First Nations Transparency Act, Bill C-27. The law requires First Nations communities to prepare and disclose audited consolidated financial statements on a yearly basis starting in July 2014, in addition to chiefs and councillors' salaries and expenses.

The standards are meant to bring First Nations communities in line with other levels of government.

First Nations groups, including the Assembly of First Nations, objected to the bill. National Chief Shawn Atleo said solutions lie in aboriginal communities, with aboriginal citizens, and not in more control from Ottawa.

He says other frequently used software is expensive, complicated to use, and fails to account for variables that matter to aboriginal people.

"These other systems are developed off-reserve and they don't understand the on-reserve realities," said Acco. "What I like about this system is it takes into account the realities of the aboriginal communities."

Acco brings up the urban native reality as an example.

The federal Indian Act system limits opportunities for those living outside their community. People can lose access to education benefits such as bursaries, scholarships and programs, as well as the right to land that might become available in the community. Many also lose tax-exemption rights.

NEMS can keep records of the urban off-reserve populations. That way council leaders stay connected to those who have chosen to live in Montreal, Toronto, Winnipeg or Vancouver for work, school or other reasons.

"You lose a lot because you or your parents made a choice to be urban and go where they can find work."

If they are in the NEMS system, people can remain in touch with their community without physically being there.

Information is key for the system to work. By adding profiles for members and programs, NEMS can help Canadians understand realities in First Nations communities.

With a proper overview of the community, Acco said, true financial management talks can truly begin.