A mother's warning after a passport check: A signature can render your child's document invalid 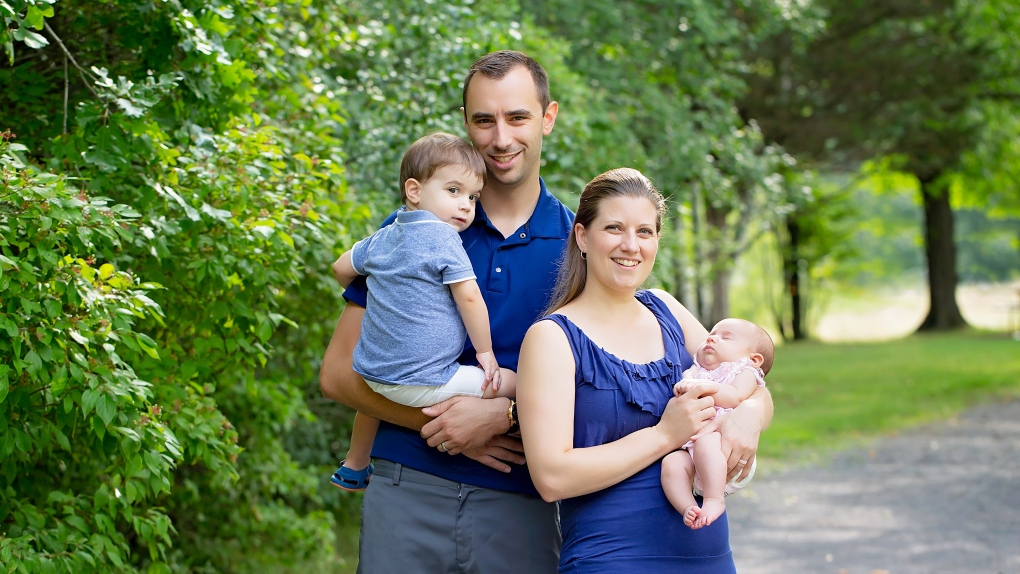 TORONTO -- A Canadian mom has issued a warning to parents travelling with young children after U.S. security officials insisted she sign her son’s passport before boarding a flight, making it invalid and forcing her to pay the fee for a new one.

Melissa Biggs from Kingston, Ont., took to Facebook to share her experience, advising parents to keep an extra official document with their child’s passport to show U.S. agents that the travel document does not require a signature.

But Passport Canada told CTVNews.ca that there are still “occasional cases” when foreign border officials pressure parents to sign their child’s passport.

“The TSA agent in the U.S., when we travelled to Florida last year, made me sign my son's passport in order to let me board the plane,” Biggs wrote on Facebook.

“I naturally felt anxious (I never want to piss off anyone border related) and so I signed it.”

She only became aware that, as a result, her son’s travel document was rendered invalid when she applied for her six-month-old daughter’s first passport.

“I got my daughter's passport back and the pamphlet that came with it clearly specified for the parent not to sign their child's passport. Instantly I thought, oh crap,” she wrote.

Biggs was forced to replace her son’s passport, which had two years left until it expired, at a cost of $57 and the price of photos.

“When I called the passport office, she said ‘Oh yes, that's happening often lately, print off this PDF and keep it with your children's passports from now on when you travel, but you will need to get him a new passport,’” Biggs wrote.

“When I went online to apply, there were warnings all over the webpage to not sign your child's passport. So don't let those damn security/border patrol/TSA agents scare you like they did me and print this form to support your gut instinct.”

Biggs was referring to a Canada Passport Program letter directed at border officials that outlines the signature policy for Canadian passports for children under 16. 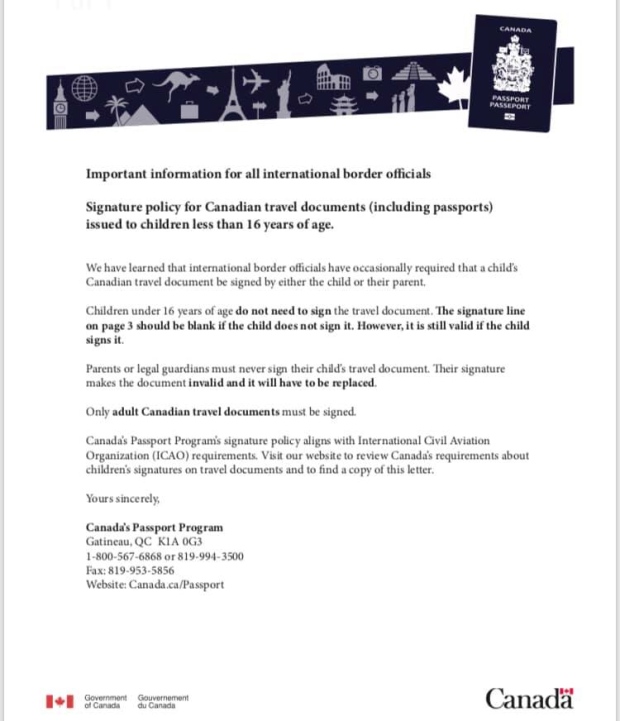 "We have learned that international border officials have occasionally required that a child’s Canadian travel document be signed by either the child or their parent,” the letter states.

“Children under 16 years of age do not need to sign the travel document. The signature line on page three should be blank if the child does not sign it. However, it is still valid if the child signs it.

“However, there are still occasional cases where border officials insist that a child’s Canadian passport must be signed by either the child or a parent/guardian,” the emailed statement read.

“In response to these difficulties, the Passport Program has made available a summary of its policy with respect to signatures on children’s passports, which can be printed from the Government of Canada website and carried by parents/guardians when travelling internationally.”

Biggs admits that she didn’t question the border officer who pressured her to sign the document, being more concerned about keeping her young son quiet and comfortable at the airport.

“I didn’t want to cause anything,” she told CTVNews.ca in a phone interview.

“If you have a child and you’re looking to get them a passport, print this PDF and keep it with the passport.”

Biggs shared comments from others who said they had the same issue at immigration.

“This happened to us even after showing them the letter,” Sha K Sason wrote in the comments to Biggs Facebook post.

“I was upset because I knew my son’s passport would be invalid and would have to get a new one.”

Biggs added that the lack of signature on her son’s passport was not an issue when they crossed the U.S. border by land.

Canadian children up to the age of 16, or under 19-years-old if travelling with a school or other youth group, need only present a birth certificate or other proof of citizenship at a land or sea crossing, according to U.S. Customs and Border Protection guidelines.

For more information on children’s passports and how to complete their passport application visit the Government of Canada website.