A dead veteran's car was parked at a hospital for years. His estranged family now knows why

TORONTO - An inquisitive security guard at a Toronto area hospital has helped solve the mystery of a Canadian veteran estranged from his family for 50 years.

Only days before Remembrance Day, the Goyetche family has answers about Arthur W. Goyetche, who drove himself to a Toronto hospital in 2015 and never left.

“He drove in here, he rushed into [Emergency] and the car idled for a couple of days and ran out of gas,” explained security guard Francesco Barbera. “And it hasn't moved since."

Barbera noticed the car and its Ontario veteran license plate with expired tags while making his nightly rounds and mentioned it to a supervisor.

They assumed his family would eventually claim the car but as the seasons changed, the small time capsule of Arthur’s life remained in place. Inside the car is a case of bottled water, two walking canes, a blanket, a file folder and what appears to be a green bomber jacket. 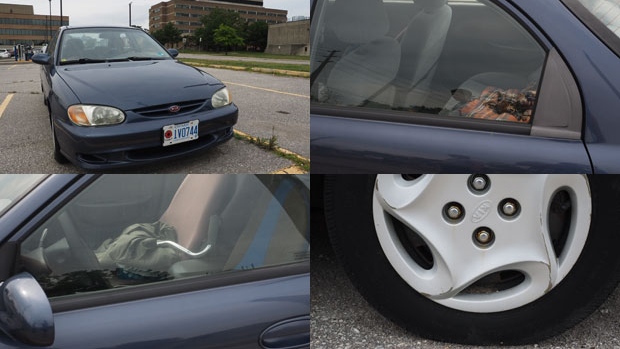 In October 2015, the hospital site closed for nearly two years to be converted into a transition facility – with the Kia where it was left.

Joe Gorman, director of communications for Humber River Hospital, said the car wasn’t in the way during construction. Calling it a bit of an "oddity," he said the hospital allowed the car to sit in the parking lot out of respect for its patient’s family.

"If we take it off the property… and put it in a garage somewhere or a pound somewhere, we don't want the family to come back and have to pay a large bill, so we kept it there for more of compassionate reasons than anything," Gorman, explained. "We are always looking out for our patients, their families."

Barbera said the hospital gave him a green light to seek out the owner’s relatives as long as it was outside of his shifts.

“I tried on my own time at home but I was kind of just going in circles," he said of his months-long search.

According to public records, the car was registered to an Arthur W. Goyetche of Weston, Ont. – not exactly a John Smith, but more of a common name than one might think. No home address was listed on the used vehicle information package.

The car in the hospital lot had a parking permit for a Toronto property management company with several properties across the city including apartment complexes in the Weston, Ont. area.

CTV News contacted the company, which confirmed that Arthur and his wife Betty were tenants at one of their properties from 1998 to 2015.

Arthur died on May 29, 2015, at the age of 84. Betty died 11 days later, the property manager said. The apartment complex's landlord also confirmed that the Goyetches had died, noting their son, Bruce, handled his parents' personal items from their apartment. (CTV News was not able to locate Bruce.)

The search for Arthur’s family was on. 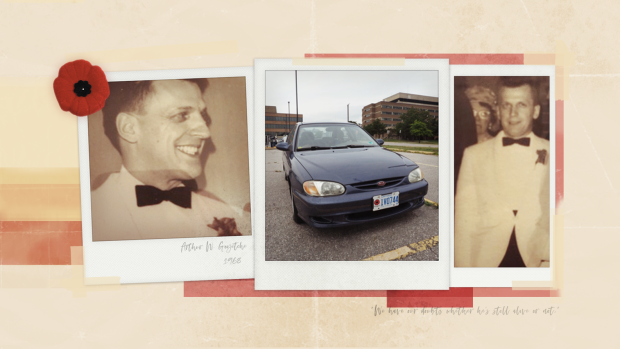 Arthur W. Goyetche pictured in 1968 and the veteran's car pictured at a Toronto hospital in September 2019. (Photo illustration by Fusun Uzun/CTV News)

CTV News contacted Alberta resident Darryl Goyetche, who has been tracking the family lineage and hosts an online genealogy site dedicated to the Goyetches.

Wanting to “help solve a mystery,” Darryl made a few calls and put out a request for information through his social media channels.

"I’ve heard from two family members… who told me about their estranged brother," Darryl said in an August email to CTV News. "Lynda in [southern Ontario] tells me her husband Gerald has a brother, Arthur who they have been trying to locate for many years but unsuccessfully. Their Arthur was in the Air Force in his younger years and was known to live in Belleville with his wife Betty, and one son Bruce. He had a bad heart condition."

Darryl went on to explain their Arthur chose not to speak to the family for unknown reasons "much to the sadness of his mother Mary and father Wilfred who have since passed away."

Darryl said the second brother had also been searching for an Arthur.

"From Halifax, I heard from Paul whose dad Clarence (Gerald’s brother) has an estranged brother named Arthur," Darryl said. "He says they have been looking for him for years."

Gerald and Lynda Goyetche said they last saw Arthur in 1968.

"Gerald and I have tried to find him and the only thing we knew of Arthur is that he lived in Belleville at one time," Lynda said in a September phone interview from their home in southern Ontario.

"Gerald and I got married in 1968 and Arthur came home for the wedding but I think that was the last time we saw him, or the family saw him.

“All these years we have been kind of stumped about how to find him.”

Gerald said he isn’t sure why his brother cut off communication with the family. “Arthur and I got along good, I don't know what the problem was,” he said. The family suspects Arthur owed his parents money. 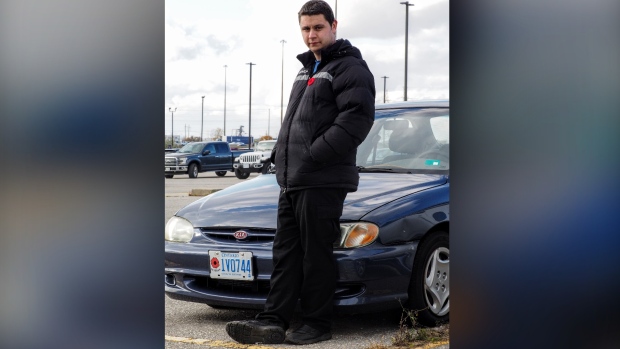 The Goyetches said they are "comforted" by the confirmation of his death and thanked Barbera for taking the initiative.

“How grateful we are because if it wasn't for him, showing any interest, if it weren't for him being interested enough to try and find a family, we would have known nothing," the family said late last week. “We are just very grateful to him."

Barbera said he’s just happy to have had a part in solving the mystery.

“It's nice to know that there was an outcome to it," he said. "The family gets closure; I know I would want closure anyway. I wasn't looking to get anything out of this and I'm glad we were able to get somewhere.

"I am happy for them, they get some closure and they get to know what happened to their loved one. Especially from the sound of it, they didn't know much of him.”

Barbera said even after four years in the lot, the parking fee will only be $5.

If you had come to know Arthur, his wife Betty or son Bruce, the family would like to learn more. Contact adam.frisk@bellmedia.ca.