The RCMP intercepted 887 people trying to illegally enter Canada in March, with the majority of those asylum-seekers picked up in Quebec.

The new figures, released by the federal government on Wednesday, show that the wave of people trying to enter Canada between official border points continues to rise.

In total, 644 were picked up in Quebec in March, 170 in Manitoba and 71 in B.C. Alberta and New Brunswick both recorded one border crossing each. 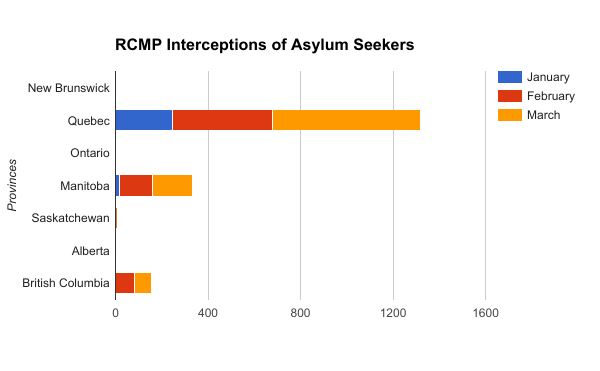 In February, 658 people were intercepted. Dozens more are believed to have crossed in April, but those figures have not been released.

You can find all the numbers provided by the Canada Border Services Agency here.

The winter crossings are sometimes treacherous. Some asylum seekers have attempted to make the journey in the dead of night in freezing cold conditions to avoid running into law enforcement.

Anecdotally, some asylum seekers have said that U.S. President Donald Trump’s stance on immigration -- specifically, his controversial ban on travellers from seven Muslim-majority countries -- was the reason they made the journey. 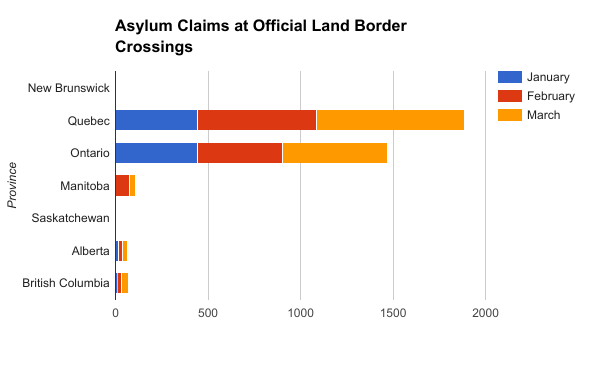 Some border towns have raised safety concerns over the issue, while volunteer groups have opened up support centres in some communities.

“They need to get more manpower out here. Our RCMP are so stretched, they can’t do anymore. They’re doing everything they can,” Beverly Robb, a resident of Piney, Man., told CTV News.

In Saskatchewan, a woman was charged with smuggling and arrested near the U.S. border with nine foreign nationals in her vehicle. Officials allege she had large amounts of cash in her home.

In Manitoba, an asylum seeker was arrested after allegedly assaulting a border guard. Officials say the guard required medical attention.

Border officials have confirmed that three asylum seekers who posed a threat to public safety were arrested in Manitoba in the last four weeks.

“With not getting any of these numbers, and we know there’s some criminals coming in through the mix of all these people jumping across the border, the local residents are getting a lot more concerned,” reeve Greg Janzen said.

New evidence of the steady crossings is expected to add more pressure on the federal government to respond to the ongoing issue.

In a statement to CTV News, a spokesperson for Minister of Public Safety Ralph Goodale responded to the new numbers. Read the full statement below:

“While the vast majority of immigration to Canada is carefully planned and managed in an orderly fashion over the long term, the flow of spontaneous asylum seekers are much smaller and largely unpredictable. These are people who feel they are in danger or at risk, and once they get themselves into Canada by whatever means, they claim asylum in this country for their personal protection. They represent only a fraction of all the newcomers we welcome every year, and do not impinge on the regular system.

In March there continued to be an increase in asylum claims and intercepts of irregular border crossers. In cooperation with our partners, the Government of Canada is constantly analysing these trends and planning for possible developments.

Canadian authorities are managing the increase in asylum seekers in a sound and measured way, applying our laws and procedures to keep Canadians safe while fully respecting all of this country's international obligations.

To be clear - trying to slip across the border in an irregular manner is not a "free" ticket to Canada. The asylum seekers are apprehended and secured by police or local authorities. Their identities are determined from both biographic and biometric information. Health checks are done. Their records are examined for any immigration, criminal or terrorist flags against both Canadian and international databases. Those who cannot be identified, are a flight risk or pose a danger to the public can be detained. They all go before the quasi-judicial Immigration and Refugee Board (IRB) to adjudicate their status through due process. If they are found to be inadmissible without a valid claim, removal procedures are begun.

To handle these matters thus far, CBSA and the RCMP have made internal adjustments to ensure they have the right personnel and tools in the right places to deal with existing circumstance safely and securely. As the situation evolves, these professional organizations will advise as to what extra resources may be required.”