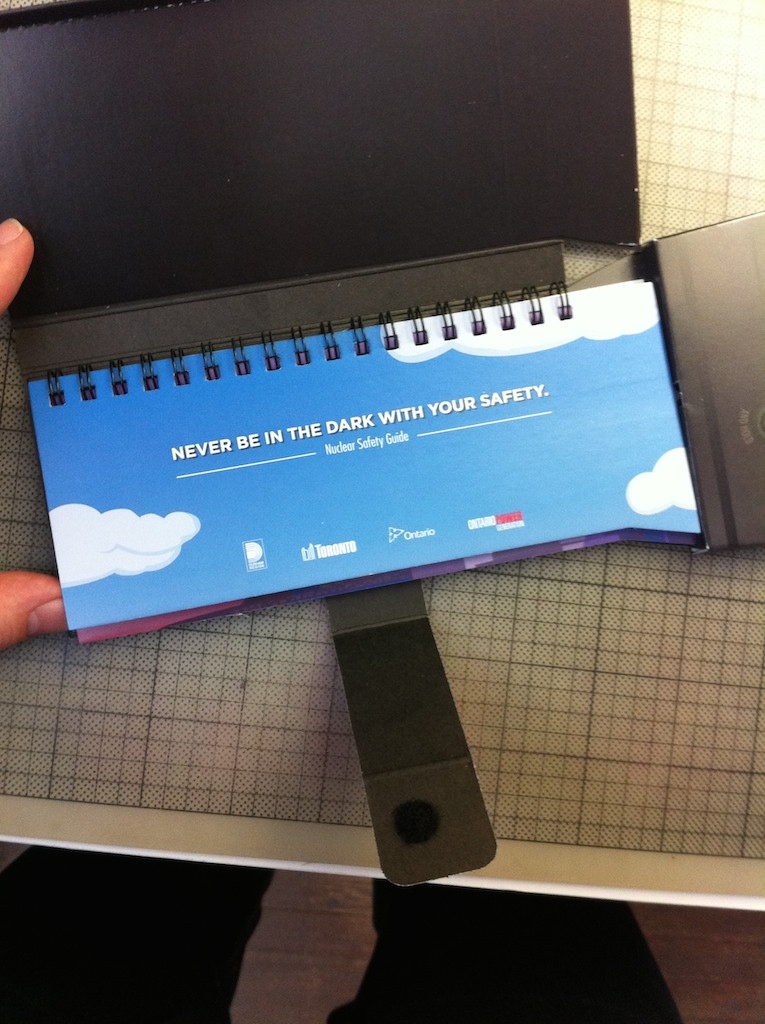 Part of a guidebook on surviving a nuclear emergency is shown in this undated image. (Ted Rouse)

People living within 10 kilometres of the Darlington and Pickering power plants are being mailed something to go in their nuclear disaster survival kits: a flashlight.

Ontario Power Generation launched a campaign earlier this week that’s a bit heftier than the average pamphlet. They’ve sent out flashlight-shaped booklets that detail what to do in a nuclear emergency to 200,000 homes and businesses in the area.

And not only do the 24 pages walk through the steps of surviving a disaster -- they also light up using a push-activated LED embedded in the head of the paper flashlight.

“I would say it was definitely effective, as I’m certainly going to keep it,” says Ted Rouse, a Pickering resident who found the booklet in his mail on Tuesday. “I posted photos of it online and actually paid more than passing attention to it.”

As an independent graphic designer, Rouse says he was impressed to see such a complex piece sitting in his mailbox, guessing it was “one of the most expensive pieces of direct-mail” he’s ever received. And at three dollars apiece, according to OPG spokesperson Neal Kelly, it does cost more than a paper flyer.

But it did something a flyer doesn’t usually do -- it grabbed Rouse’s attention. He was interested enough to photograph every page of the pamphlet, including a demonstration of its light, and post it to the Toronto subsection of content aggregator Reddit.com.

The colourful, spiral-bound pages of the package contain everything from a list of emergency broadcast radio stations to what pharmacies give out free potassium iodide pills. Kelly says they needed to reach a lot of people, so they wanted to make sure their message was effective.

“Research showed people were more likely to retain information that was innovative and stood out from other pieces of mail,” he says. “We are confident based on extensive market research this will raise awareness.”

The booklets are part of “Emergency Preparedness Week,” an annual, country-wide campaign started in 1996 by the Canadian government. During the first week of every May, every province and territory makes an effort to educate people about how they should prepare for and react during a disaster.

While a website with generic tips and safety kit checklists might not reach a wide audience, Rouse thinks sending out a unique piece of mail is an effective way to get the message out.

“We’ve been planning on preparing an emergency prep kit for a while, so I will probably use some of the guidelines in here for that,” he says, referencing the book’s advice to keep a can-opener, extra car and house keys and a battery-powered radio handy.

“And I expect I’ll hang on to it for the sheer uniqueness of it.”