12 stories about Syrian refugees in Canada that warmed our hearts

A year ago, on December 10, 163 Syrian refugees arrived at Toronto’s Pearson International Airport around 11:30 p.m. Waiting to greet them at the terminal was Prime Minister Justin Trudeau. Amidst photographers and television crews, a beaming Trudeau shook hands with the families, handed out stuffed toys to children and even helped them find coats that fit from neatly piled stacks of winter wear.

It was a picture-perfect moment that made headlines around the world. Now, exactly a year later, we look back at how the #WelcomeRefugees to Canada resettlement process has fared, how Canadians have been involved, and how these Syrian refugees are doing in their new home.

While a poll conducted weeks before the first planes arrived showed that the nation was not unanimously in favour of the resettlement program, since their arrival, some of those opinions have changed and increasingly, Canadians have pitched in to help.

Stories have poured in from every province that took in refugees throughout 2016 garnering much attention. From Ban Ki-moon to Bill Gates, Canada has received high praise for its work in this area.

However, as the months progressed, there have been challenges. Delays in issuing permanent residence cards to newly-arrived Syrian refugees have hampered integration. Saskatchewan reported a strain on resources. Federal funding shortfalls led to fewer language classes for Syrian refugees in Toronto and Vancouver. Finding employment has also been a struggle. In addition, there have also been reports of isolated issues such as Syrian refugees getting pepper-sprayed in Vancouver and falling prey to a phone scam in Saint John, to name a few.

Reading this on an app? Tap here for the mobile experience.

1. Children experience the joy of sledding

As the three children, daughters Ansam, 13, Dalya, 9, and son Ibrahim, 10, sled down the hill, McNab’s camera captured the expression on their faces. "It was very heartwarming for all of us," said McNab. After consulting with their mother Amal, McNab and his wife Kristy Hiltz posted the video to Facebook. A day later it went viral.

In Winnipeg, artwork by local kids were featured in a Winter Enjoyment Guide. Its purpose? To give Syrian refugees a warm welcome and inform them on how best to experience Winnipeg winters. Created by Art City, a not-for-profit community art centre, the guide included indoor and outdoor activities, information on how to build a snowman, snow safety tips and sledding etiquette. While contributing drawings to the guide, participants learned more about the Syrian refugee crisis. Newcomer agencies across Winnipeg received the guides along with art supply care packages. 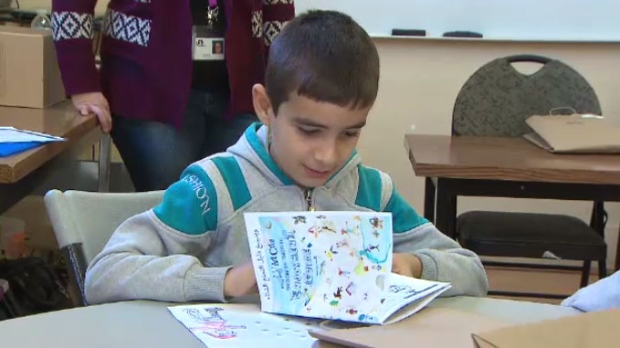 Syrian refugee children learn how to enjoy winter with the help of a Winter Enjoyment Guide created by local kids in Winnipeg in March 2016. (CTV News)

In Montreal, a group of Mohawk people welcomed Syrian refugees by performing At the Woods Edge, a traditional ceremony to welcome newcomers. Loaded with symbolism, the ceremony's primary goal is to cleanse newcomers' of spiritual turmoil before they enter Mohawk territory. "Them showing their sentiments behind this, behind the whole immigration issue, was really moving for me," said Avedis Sarajian, one of the Syrian refugees in attendance.

When a wildfire spread across Fort McMurray on May 1, Rita Khanchet Kallas, a Syrian refugee who arrived in Calgary with her husband and son in December 2015 wrote a message in Arabic on the private Facebook page for the Calgary-based Syrian Refugee Support Group.

“Canadians have provided us with everything and now we have a duty,” she wrote. “We must … help the people who lost their homes and everything in a fire (in) Oil City … Get ready, it's time to fulfill.” A fellow Syrian refugee translated and shared the Facebook post and offers of help poured in within hours and the group started assembling hampers. 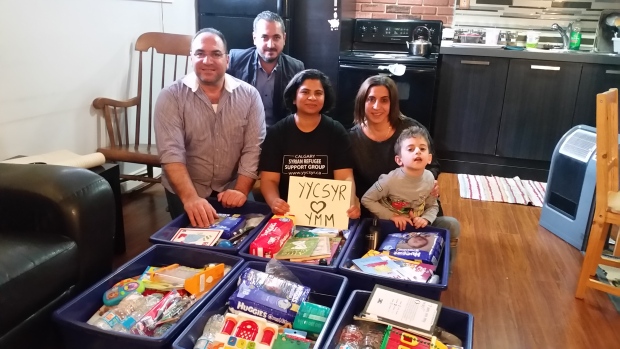 Members of the Syrian Refugee Support Group Calgary assemble hampers with essentials to send to Fort McMurray evacuees after a wildfire that began on May 1, 2016 spreads across the area forcing resients to leave. (Saima Jamal)

It was a scoreless semi-final in Halifax when New Brunswick and Newfoundland faced off in the Under-16 Atlantic Championships. And then Mohammed Matar Haj Ale, scored the winning goal. The 16-year-old and his family spent three years in a camp for Syrian refugees before moving to Fredericton in January. He had been called in to play when another player couldn't make the trip to Halifax for the game on June 27. It was his first game for the team. 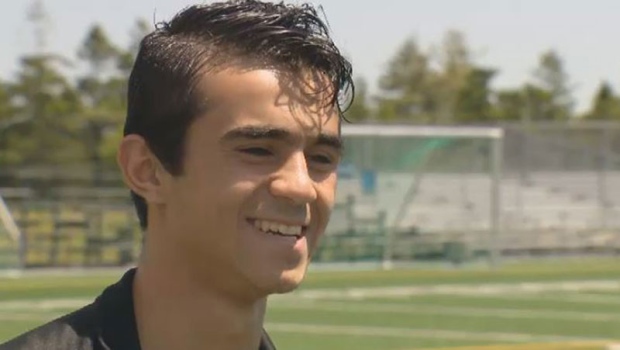 Soccer player Mohammed Matar Haj Ale and his family spent three years in a camp for Syrian refugees before moving to Fredericton in January 2016. (CTV News)

Bassel Mcleash, a 29-year-old gay Syrian refugee, arrived in Canada in May 2016, three years after leaving Damascus for Egypt. Just over a month later, he found himself, marching in Toronto’s Pride Parade, next to Prime Minister Justin Trudeau. It was a first for both of them. Mcleash told CTV News Channel that he told the prime minister “because of you I’m here, because of you I’m safe and able to do everything.” 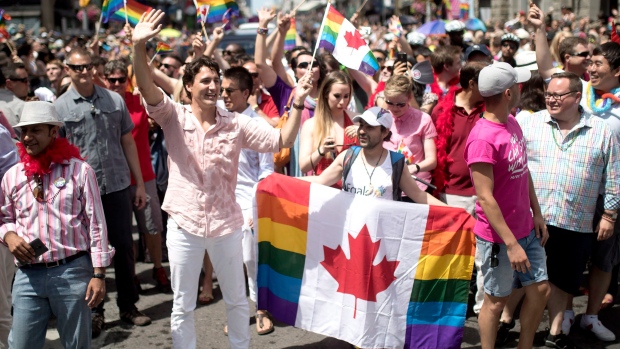 7. Rush hour commuters pitch in to help a lost family

They say kindness is contagious. In July, Valerie Taylor, the psychiatrist-in-chief at Women’s College Hospital in Toronto, came to the aid of a Syrian family of five. They were lost in the hustle of Union Station during the evening rush hour. As she helped them make their way to their GO train, others lent a hand in carrying their strollers and bags. They had arrived in Canada four months ago and were trying to make their way to London, Ont. to be with family.

Once on the train, Taylor realized the family had received incorrect advice and were headed the wrong way. Between her and some 50 other people, they were able to pool together enough money to cover the additional cost of tickets for the right train. But it didn't end there. Somehow GO received wind of the situation and ended up sending the family to London in two taxis. When Taylor recounted the story on Facebook, her post was shared more than 29,000 times.

After 30 years of operating a chocolate factory in Damascus, Isam Hadhad had to close its doors and flee his country with his family in 2013. After their application to relocate to Canada was approved, Hadhad’s son Tareq was the first to arrive in Antigonish, N.S. in 2015. Soon the rest of the family followed. Less than a year later, with the help of their community, Peace by Chocolate was born in August 2016.

A month later, the family-run business received an international shout-out in Prime Minister Justin Trudeau’s speech to the Leaders Summit on Refugees at the UN in New York. Two months later, Trudeau tasted the chocolates and met the father and son during a trip to Sydney, N.S. 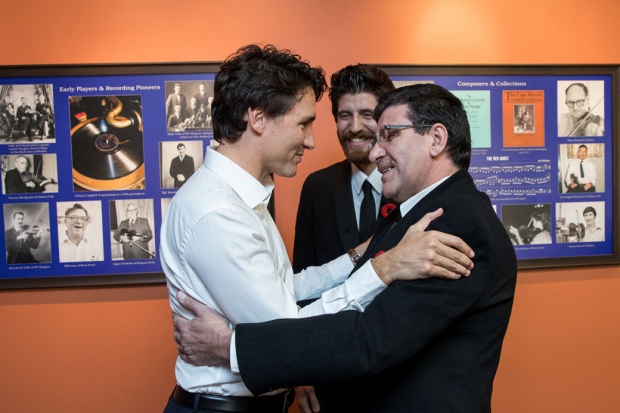 9. A thank you with coffee and doughnuts

In September, Syrian refugees in the Waterloo region decided to show their appreciation for the warm welcome they had received from Canadians by setting up an event at Kitchener City Hall. “When I came here and introduced myself as a refugee, people (said) ‘You are not a refugee. You were a refugee before your plane landed here. You are a new Canadian right now." said Tareq Haj Ibrahim, who arrived in Canada on Sept. 20, 2015.

There was dancing, drumming, coffee and free doughnuts, which the refugees pooled their money to purchase, along with homemade baked goods. 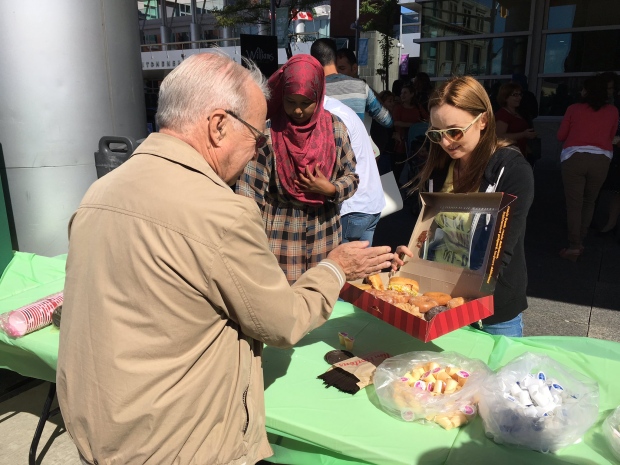 A man picks out a doughnut during an event organized by Syrian refugees as a way to thank the community on Friday, Sept. 16, 2016. (Nadia Matos / CTV Kitchener)

When the zipper on Jo Du’s wedding dress broke just hours before her ceremony, her wedding photographer Lindsay Coulter suggested asking the neighbour next door for a pair of pliers. When a bridesmaid who was dispatched for the task returned, she had something better. David Hobson, the neighbour she approached, had taken in a family of Syrian refugees four days earlier. The father, Ibrahim Halil Dudu, had worked as a tailor in Aleppo for 28 years and had a complete sewing kit. Within a few minutes Halil Dudu fixed the zipper.

“I was so excited and so happy,” Halil Dudu said through a translator. “I like to help Canadian people from my heart.” 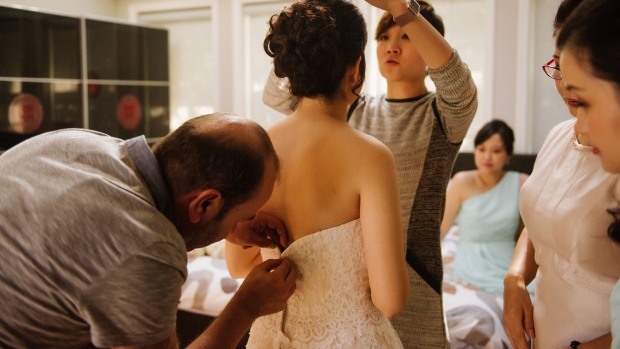 Tarek Bin Yameen, a medical student at the University of Toronto launched a pilot project in September 2016 to help Syrian refugees get eye care. For him, it was personal. Bin Yameen grew up in Yemen and in 1994 when a civil war broke out, his family lived as internally displaced refugees. Watch how his personal experiences and a call from a local refugee sponsorship group inspired his project.

A medical student has launched a pilot project to help Syrian refugees get eye care. Tarek Bin Yameen has a very personal connection to the cause and teamed up with non-profit organization 'Mes Amis' to help. He joins us in-studio with more.

12. Syrian refugee sings her gratitude to Canada at concert

On November 20, 17-year-old Talar Simonian had the chance to say thank you to Canada. Simonian sang in the Concert of Gratitude organized by the St. Vartan Armenian Church of Mississauga in the segment titled “Thank you Canada.” The Syrian-Armenian refugee and her family were forced to leave Aleppo four years ago. They arrived in Canada last year. 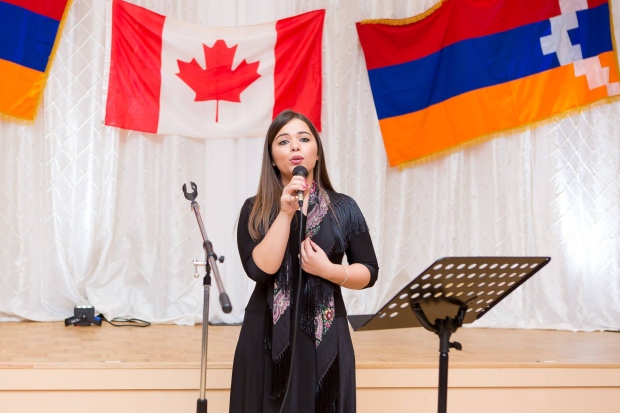 At the Concert of Gratitude on November. 20, 2016, Syrian-Armenian refugee Talar Simonian sings in the "Thank you Canada" portion of the event. (St. Vartan Armenian Church of Mississauga, Canada)

Back in September, when CTV reported from Kitchener City Hall about Syrian refugees saying thank you with coffee and doughnuts, one of the refugees, Tareq Haj Ibrahim said, “When I came here and introduced myself as a refugee, people (said) ‘You are not a refugee. You were a refugee before your plane landed here. You are a new Canadian right now.’”

Looking back at these stories, that sentiment rings loud and true.