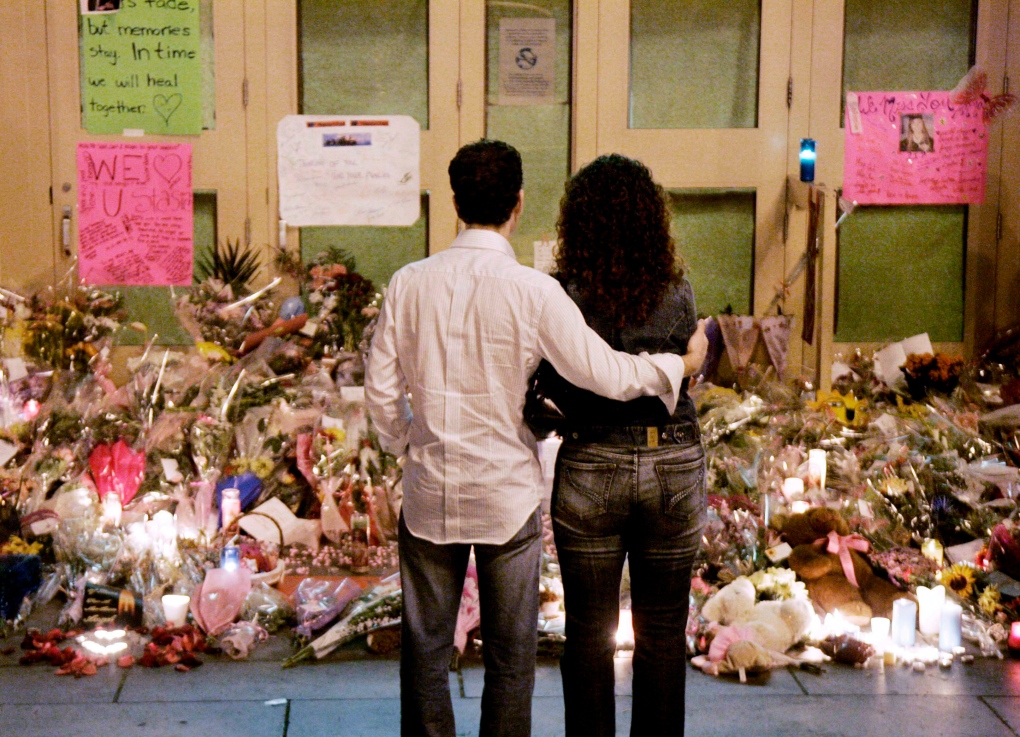 A couple observe a public memorial at the scene of the Dawson College shootings in the early morning of Sunday, September 17, 2006. (CP PHOTO/Ian Barrett)

Montrealers will commemorate the 10th anniversary on Tuesday of the shooting at a downtown junior college when a man murdered a young woman and wounded another 16 people before killing himself.

Eighteen-year-old Anastasia De Sousa was sitting in the Dawson College cafeteria with friends when Kimveer Gill, wearing a black trenchcoat, black leather boots and with his hair styled in a Mohawk, started shooting.

Gill had already shot six people standing outside the doors of the college when he entered the building, made his way to the cafeteria and took aim at De Sousa, hitting her and another three students.

The shooter turned and asked James Santos, a student he had taken hostage, if Anastasia was still alive.

Santos told him he didn't know and begged Gill to let her leave the school to be treated.

Gill then asked another male student if Anastasia was dead and was told he didn't know.

He then riddled her body with bullets.

"Now she's dead," he said, according to a coroner's report into the tragedy.

Anastasia's mom, Louise Hevey De Sousa, said in an interview she was initially told her daughter was shot in the arm and was being treated in hospital.

De Sousa said she felt like a "zombie" during the hours she waited before hearing the news.

"I had knots in my stomach," she told The Canadian Press. "There was something wrong."

When De Sousa and her husband found out around 9 p.m. that night their daughter was dead. "our entire lives fell apart."

"I didn't believe it," she said. "I was sure they had made a mistake."

Anastasia's murderer was not a student at Dawson, an anglophone institution sitting on 12 acres of green space in downtown Montreal. Gill had been out of a job for a year and was living in his family's home in Laval, just north of Montreal.

He was armed with several weapons, including a Beretta CX4 Storm, a semi-automatic he used to shoot 72 rounds in and around the college.

The gun was so big that witnesses said they thought he was an actor in a movie when they saw him walking with it outside the school.

Gill used another weapon, a Glock pistol, to shoot himself dead roughly 20 minutes after starting his rampage.

"I often ask myself where she would be now," she said. "Would she be married? Would I be a grandmother? I'll never know. Burying your daughter at 18, it doesn't make sense."

Parvinder Sandhu, Gill's mother, said she is still suffering from what her son did.

"I won't say anything," she said in an interview. "No, it's too painful and I'm still suffering. Life has changed forever and I'm not able to say anything. It's extremely painful."

"He was such a nice person, very gentle, kind, everything you can think about," she said. "But when all this happened, it's like, 'Oh my God'. It's hard to understand. It's not him. He was totally opposite."

The coroner's report said that written among Gill's notes were passages describing how he would have murdered his parents if they had tried to get in the way of his plans.

Meaghan Hennegan was one of the six students shot outside the front doors to the school, which were a few metres from the cafeteria where Gill fired most of his rounds.

Now 28, she recently completed a degree to become a pharmacy technician and found a job in her field. She had to undergo years of physiotherapy and says she still has pain in her arm.

She said the fact the Beretta that Gill used to shoot her is even more accessible in Canada than it was 10 years ago is insulting.

During the time of the shooting, the semi-automatic was classified as "restricted," forcing its owner to have a special permit for possessing the weapon and another for transporting it.

As was the case in 2006, the weapon can be used only at shooting ranges.

Now, a modified version of that gun is available and is classified as "non-restricted," which requires only a regular permit to purchase.

"That makes me so angry," Hennegan said. "It's a slap in the face."