1.8 million hectares of Canada burned by forest fires so far this year 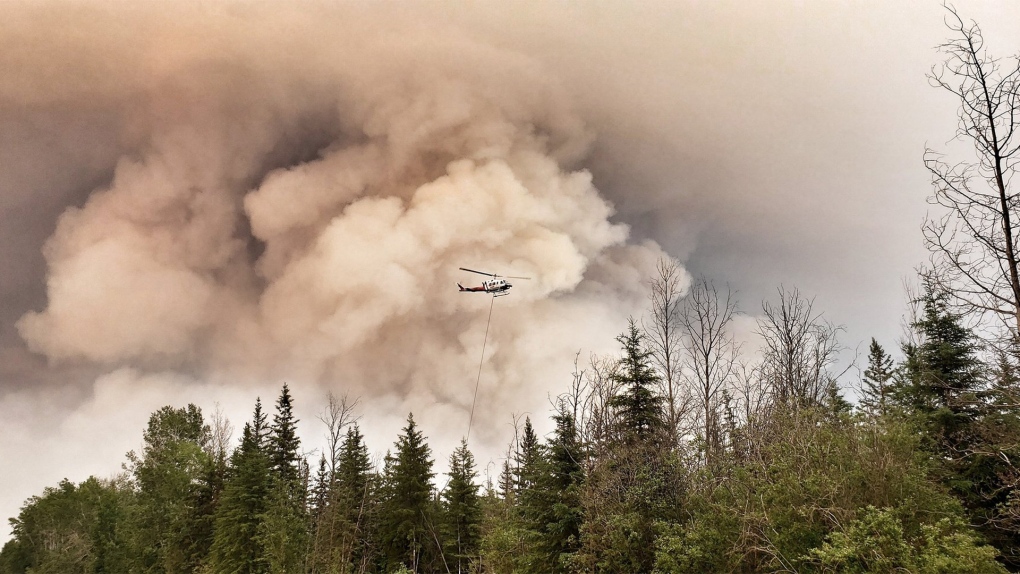 The Chuckegg Creek wildfire is pictured on June 16, 2019. (Source: Government of Alberta)

On this day last year, British Columbia was in the midst of a three-week-long state of emergency declared due to wildfires.

On this day two years ago, thousands of people from across Western Canada had been ordered to leave their homes as fires threatened their communities.

On this day three years ago, people with homes in some parts of Fort McMurray, Alta. had been kept away from their properties for more than three months because of the still-notorious fire that tore through the area.

This time around, though, most Canadians thinking of forest fires likely have their minds drifting to another continent. Parts of the Amazon rainforest in Brazil have been devastated by fires this month, capturing global attention.

But while domestic forest fires may be going ignored, they are still burning – more than 300 of them, according to the latest data.

The Canadian Interagency Forest Fire Centre, which co-ordinates wildfire response across the country, says 254 forest fires were being fought and 75 others monitored as of Wednesday afternoon.

BC Wildfire Service fire information officer Hannah Swift described the year as being average, or slightly below, for fire activity.

"It's definitely been a different kind of interesting summer – but we have stayed busy," she told CTVNews.ca.

Crews in B.C. have been hopping from fire to fire, but haven't faced nearly as many significant blazes as they did when the state of emergency was declared last year. The province uses the term "wildfires of note" to denote fires that pose a threat to public safety or are visible to a large number of people.

"Last year we had 113 fires of note, and this year we have nine," Swift said.

MOST FIRES IN ALBERTA, ONTARIO

In total, Canada has seen 3,873 reported wildfires this year. They have combined to burn more than 1.8 million hectares of land – an area more than three times the size of Prince Edward Island.

The total amount of land consumed by fire is roughly in line with what was seen in 2018, although the total number of fires is well down from the 6,444 recorded at this time last year. Over the past 10 years, Canada has experienced 5,670 forest fires and lost nearly 2.7 million hectares of land by this point.

"I would hate to even call this season a quiet season. We've almost burned two million hectares in Canada – and that is about the long-term average," Mike Wotton, a Canadian Forest Service research scientist and University of Toronto assistant professor, said in an interview.

"Even though it doesn't seem like this was a busy season, it was still a challenging enough and busy enough season in the spring."

Alberta has seen more wildfires and lost more land to fire this year than any other province or territory. The largest of its 955 fires is the Chuckegg Creek blaze, which led to about 10,000 people being evacuated in and around High Level, Alta. in the spring. As of Thursday, it was more than 350,000 hectares large – the same size it had been for more than a month – and considered to be under control, according to Alberta Wildfire.

Firefighters from eight provinces, the Northwest Territories, several U.S. states and South Africa have all spent time battling the blaze at Chuckegg Creek.

It is common practice for firefighters to head elsewhere to help when things are slow on the home front. Swift said 1,334 B.C. firefighters have been sent out of the province this year to assist crews in Ontario, Alberta, Yukon and Alaska.

Wildfire crews also spend fire-less days in training activities, conducting maintenance or assisting with non-fire emergencies. Some B.C. firefighters have been helping clean up the area around the Big Bar landslide, while Ontario crews sandbagged the Ottawa River as part of flood preparations.

Ontario has recorded the second-most fire-related land loss of any province, although its 270,000 hectares of fire pales in comparison to the more than 880,000 hectares burned in Alberta.

The largest fire in Ontario this year has been in the province's northwest, somewhat near the community of Pikangikum. It comprises 96,500 hectares – an area about 1.5 times the size of the City of Toronto – was discovered June 15 and is labelled as being under observation.

That classification doesn't mean that the fire isn't being fought – only that it could theoretically continue to spread in at least one direction. Unless a fire is at risk of endangering lives or properties, firefighters typically let them take their natural course.

"The only reason why we stop fire is because of the public. Fire is very natural, and Mother Nature will put it out," Jean Quesnelle, a fire operations technician with Ontario's Ministry of Natural Resources and Forestry, said via telephone from Sudbury, Ont.

Wildfires are seen as a natural part of the ecosystem. They're necessary for cleaning out dead trees and making room for regrowth.

Quesnelle said Ontario has seen 518 forest fires this year, down significantly from 1,253 at this time last year and the 10-year average of 774.

THE ROLE OF CLIMATE CHANGE

This year's low fire count doesn't indicate a repeat performance is in the cards for 2020. Nor does it suggest next year will be a busier one, making up for lost time. Everything from weather conditions to human activity can influence the size and scope of any one particular fire season.

"We have 518 fires here. Next year we could have double that, triple that. It's just the nature of the beast," Quesnelle said.

Nor is there necessarily a connection between the busiest wildfire seasons and the ones which stick in the public consciousness. Many Canadians will remember the 2016 fire season because of the Fort McMurray inferno, but Wotton notes that the "impactful" nature of that blaze wasn't echoed in the experience of the rest of the year.

"In terms of these measures like area burned and number of fires, it was another – you can't see my air quotes, but a 'quiet' season," he said.

This year, weather is believed to be the biggest reason Canada's forest fire season hasn't been worse. Snow was late to melt in many parts of the country, leaving the ground saturated with moisture and making it difficult for fires to spread.

As spring gave way to summer and the weather warmed up, well-timed rain stopped most regions from drying out to the point where widespread fires were a serious concern.

"We keep seeing these patterns that it's nice and sunny for six or seven days, and then we'll get a bit of rain which slows things down," Quesnelle said.

Climate change can play a role too. Warming temperatures and increased drought lead to dryer forests, which create a greater risk of larger and more intense wildfires – but as this season proves, that increased risk doesn't automatically translate to more intense fires every year.

"We know what will happen if we're living in a world where temperatures are warmer," Wotton said.

"You have quiet seasons, you have busy seasons – but overall, we're expecting all of the work that we do tells us that we will increasingly see more of these busier seasons."