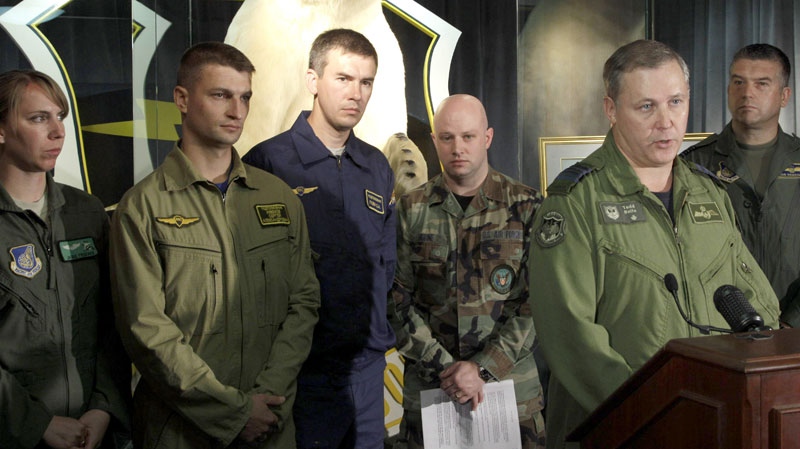 OTTAWA - It took a major Arctic military exercise to help thaw old Cold War suspicions between Canada, the U.S. and Russia, according to a Canadian Forces report.

And despite an "immense" language barrier, the Department of National Defence heralded the success of last summer's groundbreaking joint exercise with its former Cold War adversary.

The report offers a glimpse into the behind-the-scenes tensions that led up to the historic attempt at military co-operation, dubbed Exercise Vigilant Eagle. It comes as the second version of Vigilant Eagle took place this week in Alaskan airspace.

The exercise was originally set for 2008 but had to be cancelled when relations between Russia and the West plummeted after Moscow's invasion of neighbouring Georgia.

"Accordingly, a measure of uncertainty and a perceptible note of suspicion were evident to military planners as the exercise was resurrected," Canadian Col. Todd Balfe, the deputy commander of Norad's Alaskan region, wrote in his report on the 2010 exercise.

Norad is the joint Canada-U.S. command that defends against threats to North American airspace. Considered the jewel of Canada-U.S. defence relations, it was established 53 years ago essentially to monitor for Russian missile or bomber attacks.

Many Canadian officers in Norad found it "challenging, for example, to explain to Russian officers the bi-national nature of this organization and to fully convince them that air defence was indeed a shared U.S.-Canadian responsibility," Balfe wrote.

He noted that planners had to overcome the "memory of decades of antagonism and confrontation during the Cold War" to build new co-operation and communication between Russia and the two Norad allies.

"Not surprisingly, communication between former Cold War adversaries was an immense obstacle."

Planners used Internet technology such as Skype and Yahoo Chat to break down the barriers and ease the burden on translators, wrote Balfe.

His report said the 2008 cancellation "did not invalidate the premise of the exercise" -- improving communication between Russia and the U.S. to reduce air terrorism.

This year's drill began Sunday with a simulated American passenger jetliner flying over Alaska and not responding to air traffic controllers.

Under the scenario, no one on the ground knew what was happening on board, so warplanes were scrambled to pull up along side and make visual contact. The airliner was eventually turned back to Alaska.

The drill was conducted with a series of exchanges between Russian and Norad military command and controllers, with jets and air surveillance from both sides fully engaged.

On Monday the same scenario was repeated in reverse, this time with a mysterious airliner coming out of Russia. It too was repelled from North American airspace and was escorted back home, eventually by Russian jets.

Orland said many of the past communications obstacles ironed themselves out this year.

"This being the second year, it's really allowed us to kind of resolve a lot of the issues we've had with that by having good translators and really working through the protocols of what information is passed," Orland explained. "Both sides know what to expect and how to expect it. So that's really helped with that communication piece."

In his 2010 report, Balfe wrote that senior Norad officers and their Russian counterparts, as "old cold warriors," felt it was a "surreal experience" to see each others' aircraft up close during the exercise.

But in the end, both sides expressed "immense satisfaction" that they had opened up new lines of communication.

Balfe said he shared the views of his Russian counterpart, Col. Alexander Vasilyev, whom he quoted as saying: "(t)his exercise is very beneficial to North America and to Russia .... It is very important that we work together to develop procedures and bring the relationship between our countries closer together to unite our countries in the fight against terrorism."