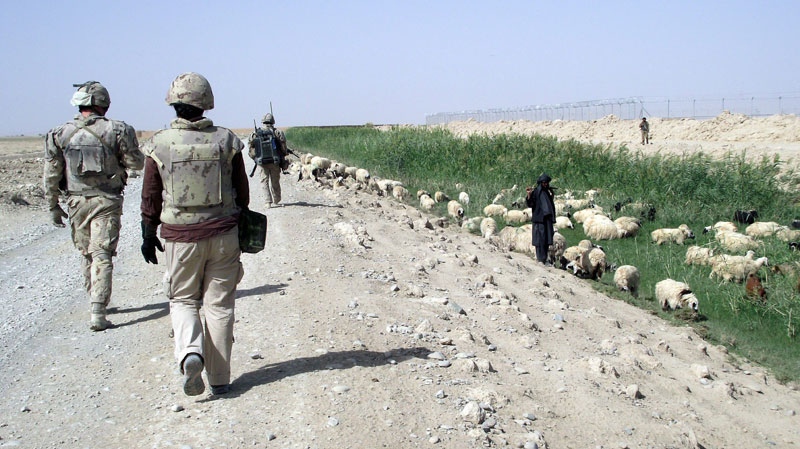 A Canadian patrol passes a local sheep herder during a visit to a farm in Afghanistan on Thursday Sept. 9, 2010. (Dene Moore / THE CANADIAN PRESS)

OTTAWA - Canada spent more than $41 million on hired guns in Afghanistan over four years, much of it going to security companies slammed by the U.S. Senate for having warlords on the payroll.

Both the Defence and Foreign Affairs departments have employed 11 security contractors in Kabul and Kandahar since 2006, but have kept quiet about the details.

Now documents tabled in Parliament at the request of the New Democrats provide the first comprehensive picture of the use of private contractors, which have been accused of adding to the chaos in Afghanistan.

The records show Foreign Affairs paid nearly $8 million to ArmorGroup Securities Ltd., recently cited in a U.S. Senate investigation as relying on Afghan warlords who in 2007 were engaged in "murder, kidnapping, bribery and anti-Coalition activities."

The company, which has since been taken over by G4S Risk Management, provided security around the Canadian embassy in Kabul and guarded diplomats.

Tundra SCA stands on guard for the Defence Department outside Canadian military forward operating bases and has collected more than $5.3 million.

The U.S. Senate report included Tundra on a list of companies that poach staff from Afghan security forces -- something that has long angered President Hamid Karzai, who last year moved to eject all private security from the country.

More than $438,000 of the Afghan-owned, Canadian-run company's expenses remain secret, for operational security reasons. But Tundra's website, unlike other contractors, promotes its intelligence "gathering and analyzing" abilities.

A Kandahar warlord, with links to former governor Gul Agha Sherzai, earned $2.5 million since 2008 providing security outside of the provincial reconstruction base.

Col. Haji Toorjan employed a 40-man militia. But there are questions about how much was spent for his service because the documents tabled in the House of Commons are not consistent with access-to-information records and published reports that show he was on the payroll in 2007.

More than $3.4 million went to Washington, D.C.-based Blue Hackle to guard the governor of Kandahar and train his security detail. Canada started paying that expense in 2008, after Karzai replaced the notorious Asadullah Khalid, who was accused of human-rights abuses and had his own private militia known as Brigade 888.

All of the contracting happened even though the federal government has no overall policy or legislation to govern the use of hired guns -- unlike other countries, notably the United States, which has imposed strict accountability guidelines on its contractors.

Even with those rules, the American system was found lacking by U.S. senators, who heard complaints from NATO that there was "little awareness of money flow" and that some of the contracts were "enriching powerbrokers, undercutting counterinsurgency efforts and delegitimizing the Afghan government."

The Canadian International Development Agency, which delivers aid projects in Afghanistan, said it does not employ security companies, but agencies that it hires to deliver programs do.

One of those contractors, SNC Lavalin, hired the Watan Group to guard one of Ottawa's signature development projects, the Dahla dam. The company, owned by relatives of Karzai, was recently blacklisted by the U.S. military.

A spokesman for the Defence Department declined comment on Friday.

The NDP's foreign-affairs critic said it's appalling Ottawa had no mechanism to govern hired guns and charged that what the country tried to accomplish in terms of rule of law in Kandahar has suffered.

"It undermines our credibility," said Paul Dewar. "Afghans are not stupid. They see these people. They see what they're doing and they know who is paying them."

Opposition parties have throughout the war mounted attacks on the use of contractors, but never had a complete picture from which to draw conclusions. Even with the release of figures and contract names, Dewar said there are still many important questions left unanswered.

"We've spent tens of millions of dollars on what I would consider to be some very dubious characters, to do what?" he said. "Foreign Affairs, in particular, needs to be held to account. I'm blown away by what I'm seeing here."

Dewar questioned why contractors were needed in the first place. But a defence expert, who has written extensively on the use of hired guns in war zones, said they are fact of life in the age of all-volunteer armies.

The contractors, usually ex-soldiers, are most often used in a defensive manner, taking up guard duties that free combat troops, said researcher Dave Perry in Ottawa.

He also cautioned that moral outrage over unsavoury alliances with local warlords should be tempered.

In conflict zones "I think it would be hard to find somebody who could provide credible security force that did not have something in their past that somebody could point to and say that they've done something inappropriate," said Perry.

What is needed, he said, are concrete guidelines.

There are an estimated 40,000 armed security contractors operating in Afghanistan. Karzai ordered them out of the country last fall, but concern about how aid and development groups would protect themselves forced him to back down.

Instead, the Afghan government has demanded that firms register with the government and begin paying taxes.