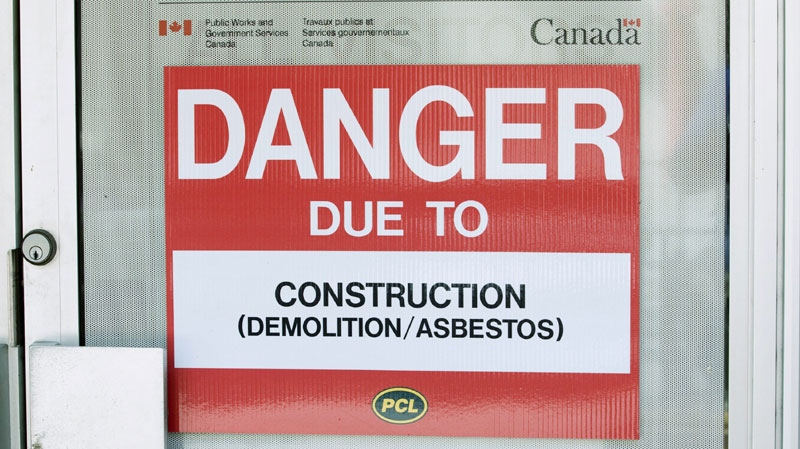 A danger sign is seen outside a construction zone in Ottawa, Monday June 20, 2011. Activists are accusing Canada of hiding behind other exporters of chrysotile asbestos at a major international conference in Geneva. (THE CANADIAN PRESS/Adrian Wyld)

Just in time for the Canada Day weekend, a major U.S. online magazine is calling out Canada for its "breathtaking hypocrisy" for exporting asbestos while seeking to rid the product at home.

A recent Slate article decries how the Canadian government is spending millions to remove asbestos from three buildings on Parliament Hill, but opposed the addition of chrysotile asbestos to a United Nations hazardous industrial chemicals  treaty last month.

The renovation of West Block in Ottawa will cost $873 million alone and is part of a $5-billion, two-decade plan to fix up Canada's Parliament buildings.

A public tender for a construction contract for West Block lists "full asbestos abatement of plaster, ceiling space overspray, fireproofing and wall voids" and the "encapsulation of inaccessible asbestos" as part of the project.

A late June conference in Geneva would have added asbestos to the UN treaty known as the Rotterdam Convention. Putting asbestos on that list would mean recipient countries would need to be warned of any health hazards associated with it and allows them to reject its import if they don't think they can handle the product safely.

But consensus was needed for the product to be added to the treaty and Canada, along with the few other countries that produce asbestos -- Vietnam, Kyrgyzstan and Kazakhstan -- blocked the motion.

Asbestos has long been linked to cancer. According to the World Health Organization, 90,000 people die each year from asbestos-related diseases. Many developed countries ban the product outright.

But the Canadian government insists the product can be used safely.

Canada has "promoted the safe and controlled use of chrysotile, both domestically and internationally," for more than 30 years, Prime Minister Stephen Harper's spokesperson Dmitri Soudas told The Canadian Press.

"All scientific reviews clearly confirm that chrysotile fibres can be used safely under controlled conditions," he said in an email.

But not all countries handle asbestos properly, as images show many workers in India don't follow regulations.

India is Canada's biggest trading partner for asbestos, taking in half of the 150,000 tonnes Canada exported annually in 2008 and 2009.

"What makes something safe for Indian workers but poisonous to Canadian politicians?" the Slate article asks.

Some Indian trade unions have called an asbestos ban. They say 20 per cent of Indian workers are exposed to the material.

In 2008, India blocked adding asbestos to the Rotterdam Convention. But this year it reversed its long-held position and now favours making it a hazardous product.

Former Conservative cabinet minister Chuck Strahl, who was diagnosed with lung cancer as a result of inhaling asbestos fibres as a young man in the logging industry, is in favour of adding it to the Rotterdam Convention.

"The problem is when you ship it to another country and they don't know about (asbestos), or aren't made aware of it, (they) may not take (the necessary) precautions," he told CTV's Power Play in June.

"Those workers won't know about it for a generation."

NDP MP Pat Martin, a longtime anti-asbestos crusader, called Canada an "international pariah for dumping it into the Third World when we won't use it ourselves."

"How can we in all good conscience block efforts to put labels on the asbestos to warn its recipients to take health and safety protocols against this class-A carcinogen?" he asked in the House of Commons last month.

Slate magazine is hardly the only major outlet to attack Canada over its asbestos exports. "The Daily Show" travelled to Asbestos, Que., in May and both mocked and rebuked Canada's position.

Canada's asbestos export sales are about $100 million a year and the industry employs a few hundred people.