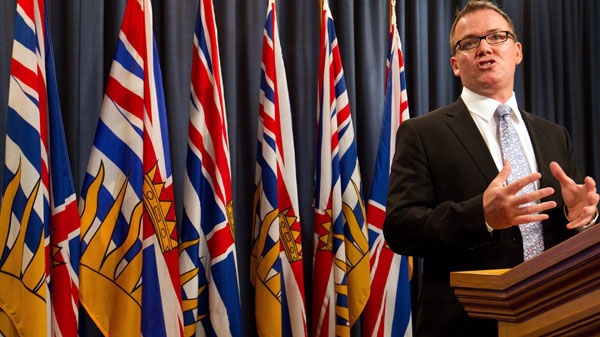 The decision to revoke British Columbia's harmonized sales tax may only be a week old, but some companies are already preparing to cope with the costly effects they will feel due to its removal.

The revocation of the controversial tax is a boon for businesses in the service sector, who saw demand drop under the regime as consumers were forced to pay seven per cent more for everything from a haircut to a hamburger.

But business owners in the goods-producing sector are set to see their profits squeezed when the province converts back to the old provincial sales tax system in 2013.

The future of the Huckleberry Mine near Houston, B.C., is being reconsidered by its owner Imperial Metals (TSX:III) after citizens voted to repeal the HST in a referendum decision announced Aug. 26.

Imperial had expected about $400,000 in annual provincial sales tax savings, but said in November -- when the HST debate was raging -- that a loss of those savings could impact the mine's long-term viability.

The company's board of directors met last week to discuss how, or whether, to proceed with a planned multimillion-dollar expansion at the mine, which would extend its life to 10 years and ensure the jobs of about 250 people.

"All those capital expenditures in 18 months are going to go back up, you're going to be taxed on making an investment in capital, which doesn't make any sense," said Byng Giraud, a spokesman for Huckleberry Mine.

One option for the expansion is to ramp up investment over the next year and a half and try and get as much construction done before the March 2013 deadline the province has set to remove the tax.

When the decision was made last August to invest $500 million to expand capacity at the Endako Mine, partially owned by Thompson Creek Metals Co. (TSX:TCM), the recently adopted HST system gave operators a degree of insurance that costs would be kept low, said mine manager Bill Mracek.

But with that gone, operating costs at the newly expanded operation are set to rise by two per cent, he said.

"We'll accept it, but what it will mean is that we're two per cent closer to break-even if the price of our product continues to fall," Mracek said.

"If the price of your product goes to the point where you're just breaking even, then you have to consider layoffs or cutbacks in other areas."

Companies in other crucial sectors -- from forestry to shipping -- will also have to adjust budgets to deal with higher input costs after 2013.

Terminal Systems Inc., which operates the Vanterm and Deltaport terminals in the Port of Vancouver, has already begun to look for ways to cut costs in its 2011-2012 budget to offset the impact of paying seven per cent more for goods.

"It just makes it all that much harder to attract the investments here in B.C.," said Dallas Leung, vice-president of finance and administration.

"With the HST removed, the projects themselves become instantly more expensive and not as attractive as they once were."

There could be a short-term pick up in investments in the industrial sector as companies scramble to complete projects -- but those more closely tied to consumer demand, including restaurants and home builders, could see fewer sales in the interim as consumers hold off on big-ticket purchases until the tax is scrapped, said John Winter, president of the province's Chamber of Commerce.

"If there is this withholding, if people stop building new homes, which is entirely possible...there will be an impact there unless there is an intermediate or short term solution."

A drop in consumer spending could leave B.C.'s economy especially vulnerable at a time when consumer confidence is already waning and export demand is slipping amid talk of a renewed global recession.

Kevin Milligan, an economics professor at the University of British Columbia, said a lengthy transition period is neccessary because of the complexity of overhauling a tax system, there's no way it's good for the economy.

"It's bad for consumers in that buying a new house or making a renovation, you have to think about 'Gee, what's going to happen before and after," -- people are going to pause."

It will also be difficult to attract business investment --which amounts to more jobs -- the province's transition into and out of a major tax reform in the space of two years is a deterrent that makes B.C. "look a bit wacky."

"When you have less investment the economy doesn't grow as much and the employment situation is worse."

Winter said he is also concerned that the outcome of a referendum, in which a majority of citizens voted to repeal the tax, could portray B.C. as a risky jurisdiction for businesses.

"I think it paints British Columbia as perhaps a tax environment or business environment where there is some uncertainty where were subject to the whims and changes that can occur."

"No other province in Canada has a law that would have even allowed this referendum to happen."

He believes much of potential foreign investment could be lost to Ontario --where the HST remains in effect.

"In one sense we see it as their loss and our gain," said Len Crispino, president and CEO of the Ontario Chamber of Commerce.

The removal of the tax gives Ontario's all-important manufacturing sector a big advantage when foreign investors are deciding on where to invest in Canada, he said. That's because value added tax systems, like the HST -- which has also been adopted in Nova Scotia, New Brunswick, Quebec and Newfoundland -- are favoured in most countries around the world.

"If you have a (foreign) company that's looking to invest my sense is that today they'd be much more likely to invest in Ontario than might have been the case a few weeks ago."