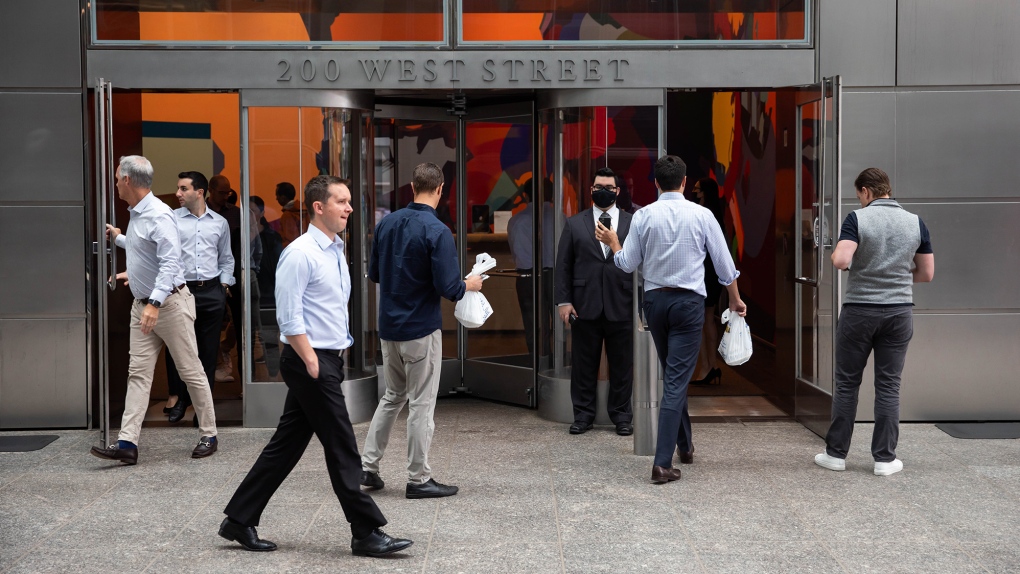 Wall Street is wasting no time getting its employees back into the office — whether they want to be there or not.

Morgan Stanley CEO James Gorman warned this week he'll be "very disappointed" if workers aren't back by Labor Day. And if they're not? "Then we'll have a different kind of conversation," he said.

Goldman Sachs asked its employees to be back at the office by this week. And the Wall Street bank even ordered staffers to divulge whether they've been vaccinated.

Even more than other industries, Wall Street is clearly in a rush to turn the page on this extended era of virtual work. Executives, employees and those who follow the industry point to a range of factors for this.

First, there are the cultural concerns. Zoom calls and Slack messages are no substitute for in-person bonding and training.

Others worry about the cybersecurity and risk management vulnerabilities inherent in businesses that conduct billions of dollars of transactions every day.

At its core, banking is a face-to-face business — and no one on hyper-competitive Wall Street wants to lose a deal because of a slow WiFi connection.

"You're creating your own unlevel playing field if you are working from home while your competition is out seeing clients face-to-face," said Mike Mayo, a veteran banking analyst at Wells Fargo. "The banking industry certainly seems intent on getting employees back to the office. But it's much more pronounced on Wall Street, where the degree of competition has always been several levels above the rest."

'THE WAR FOR TALENT'

The risk is that banks could be ignoring the concerns of employees who may not be ready (or able) to get back to the office full-time.

If Wall Street moves too aggressively, it could lose talent to more nimble yet equally lucrative industries like Silicon Valley.

Marshall Sandman, a 29-year-old former Goldman Sachs investment banker, said Wall Street is rushing back to the office in part because of a desire to reestablish the traditional mentor/mentee model.

"The way everyone learns is on the job," said Sandman, who worked at CNN owner WarnerMedia before launching a Gen-Z focused venture capital firm. "If you just left Cornell, there is no way you can learn how to do investment banking or sales trading virtually. You have no freaking idea what you're doing."

Of course, not all of Wall Street is rushing back to the office. European banks with a presence in New York are taking a more deliberate approach.

For example, a person familiar with the matter said Credit Suisse employees are beginning to return to the office voluntarily, though most are expected to be back at work after Labor Day.

THE BUZZ OF THE TRADING FLOOR

Art Hogan, a 35-year veteran of Wall Street, fears the industry has lost 18 valuable months of the kind of informal training and camaraderie that happens around the watercooler.

"That's what banks fear they are missing," said Hogan, who serves as chief market strategist at National Securities Corp. "What I miss the most is having morning meetings in person and being able to read the room. It's hard to do that on Slack or Zoom."

Hogan added that trading floors feed off the hum created by human activity. "If you see people working hard and on the phones, that excitement generates more activity. That's what bankers in general and trading floors in particular are missing. That buzz," he said.

Dennis Kelleher, the CEO of Better Markets, a group that lobbies for tougher oversight of Wall Street, said banks should be in a rush to get back to the office as soon as possible because the virtual environment poses serious risk management challenges for this heavily-regulated industry.

He pointed to everything from recordkeeping and monitoring communications to understanding what positions people are taking with bank capital.

"As best we know, nothing major has gone wrong. But that doesn't mean something didn't and we don't know," Kelleher said. "And we don't know how many near-misses there were."

Susan Gross Sholinsky, a lawyer at Epstein Becker Green who has advised financial services firms on back-to-work decisions, said regulatory concerns are a major factor behind the desire for Wall Street to get back to the office.

"Employers are concerned about confidentiality of client information, especially in light of the dollars that can be involved," Sholinksy said in an email.

And then there's the cyber factor.

The high-profile ransomware attacks in recent months on the Colonial Pipeline and meat producer JBS show how critical infrastructure companies are under siege. Banks and financial exchanges have some of the most robust cyber defenses in the private sector, but the virtual work environment complicates things.

In its 2020 annual report, JPMorgan Chase said its exposure to cyberattacks could be heightened by the fact that so many of its employees are working remotely and due to the increased use of video conferencing platforms.

WORKING FROM HOME VS. LIVING AT WORK

Dan Suzuki, deputy chief investment officer at Richard Bernstein Advisors, has noticed it's the managers who are much more eager to get back into the office than lower and mid-level employees.

"A lot of analysts and junior employees are in no rush to return to the office. People who live outside the city have zero desire to come back," he said.

SkyBridge Capital, the investment firm founded by Anthony Scaramucci, was among the first to shut down in March 2020. It was also early to get employees back to the office full-time early last month.

Brahm Pillai, a managing director at SkyBridge Capital, said he was initially caught off guard by the return.

"For midlevel management and people like myself who have young kids at home, it's very difficult to transition unless you have childcare in place," Pillai said.

Ann Berry, who worked at Goldman Sachs for 17 years, said it's been clear for months that the leaders of Wall Street wanted to turn the page on virtual work. "No one was surprised the marching orders to get back to the office were coming. I do think that perhaps more of a transition phase was expected," said Berry.

Berry added that while many employees want the flexibility to work from home, they are also eager to collaborate, have a sense of community and want a better work-life balance.

"Going back to the office puts a very clear boundary on the workday," she said. "The problem with work from home is now you live at work."

The push by Wall Street leaders to get back to the office also serves to deliver a powerful vote of confidence in New York City, which at one point was the epicenter of the pandemic. It could persuade other industries to return earlier than they otherwise would.

And that is crucial for Wall Street's commercial real estate clients and investors hurt by empty office buildings, not to mention the restaurants, bars and bodegas that rely on a steady stream of office workers.

"There is a desire to establish some confidence in New York City and the safety of offices," said Pillai. "We don't want to give up on the city just because we had a tough 2020."

"I like the people I work with, but the reality is this flexibility gives me more time to be better at my job," he said.

One senior executive on Wall Street told CNN Business that this issue has already come up in job interviews, with at least one candidate flatly refusing to come in five days a week. The person ended up pulling himself out of contention for the position.

While Morgan Stanley's CEO made something of an ultimatum to his employees, Mark Zuckerberg is taking a different approach, unsurprisingly. The Facebook billionaire recently said he plans to work remotely for at least half of the next year because that setup has made him "happier and more productive at work."

Sandman said Wall Street's rush back to the office risks tipping the scales in the war for talent even further in the direction of Silicon Valley.

"If your friends working at Google, Hulu and Twitter get to work from home," he said, "the bar for what banks need to do to attract talent just got even higher."