Why aren't Canadian restaurants using technologies adopted around the world? 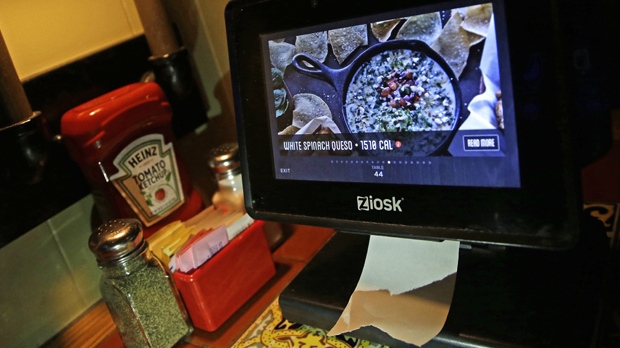 TORONTO -- Menus that bring dishes to life with a flash of a phone and virtual reality headsets that train servers have caught on elsewhere in the world, but it will take a shift in attitude and price before Canadian restaurants adopt them, say technology experts.

They've noticed Canada's food industry is ripe for robotics, artificial intelligence and augmented and virtual reality, but few restaurants have tried them because owners tend to take a "conservative" approach to technology.

Their remarks came at the Restaurants Canada Show in Toronto this week, where companies showed off robots that make sushi and tea, a device that scans food to determine its ingredients and nutritional content, and tablets that use artificial intelligence to sort and input customer orders.

They can be slow to pop up in the Canadian market because restaurateurs are obsessed with risk management, said Dmytro Kostik, the Ukrainian founder of Kodisoft, a company behind an interactive restaurant table.

"Systems they have used in Europe or the Middle East or in Japan for 10 years, which they integrate in a few months, take three years (in Canada) just for integration," he said. "No one wants to change anything here. ... There are more challenges in bureaucracy and management."

The Canadian market is only now getting its first taste of Kodisoft's interactive table that can be used to order food, play games and advertisements, and eventually, could lend itself to AR and VR applications. It can withstand water, the weight of a person, heat emitted from meals and the pressure of knives.

It has long been popular in Asia and the Middle East, but is only just being launched in Canada. Kodisoft's president teased that it just inked a deal to bring the tables to a company he refused to name but hinted is opening a restaurant, brewery and retail market in Ontario this summer.

Part of the reason why the restaurant industry around the world is slow to adoption of technology is because it is driven by margins, said Alan Smithson, the founder of Toronto-based technology innovation company MetaVRse.

Restaurants Canada data says the average pre-tax profit margin for a restaurateur was only 4.2 per cent in 2016. The organization said low rental and leasing costs gave restaurants in Prince Edward Island and New Brunswick the highest profit margins, while Ontario restaurants saw the lowest profit margins because their rent and lease prices tended to be the country's highest.

In a report the organization released in February, 70 per cent of restaurants surveyed cited cost of implementation as the main reason why they have not adopted new technology. Many also raised concerns about the training and repairs that come along with technology.

Small businesses often wait until chains have adopted emerging technologies and mitigated the risks because they can't always afford to adopt new technology when it comes with a high price tag, Smithson said.

He estimated that creating a VR-compatible version of just one dish currently costs about $1,000, but he's hoping MetaVRse can reduce that to $10 a dish within the next year.

"Dropping the price is a challenge," he said, because it's a time- and skill-intensive process that is made more difficult when you're trying to convert liquids or shiny items like plates and glasses.

Meanwhile, he's seen it become more affordable for restaurants to roll out AR and VR when training new employees, which typically involves trainees shadowing another server.

MetaVRse has created a system that's in its beta phase, where new employees can be trained without even stepping foot in a restaurant by donning a VR headset and beginning an "almost choose-your-own adventure" that can test their abilities to pour the right quantities of a drink or plate a meal.

Smithson has heard Walmart, Boeing and Coca Cola are toying with similar technology.

Companies that follow suit will quickly learn that technology currently available "is barely scratching the surface" because there are so many possibilities of where AR and VR can be used in restaurants, he said.

To those who chose to take a chance on such technology before their competitors, he said, "There will be a risk, but likely also rewards."