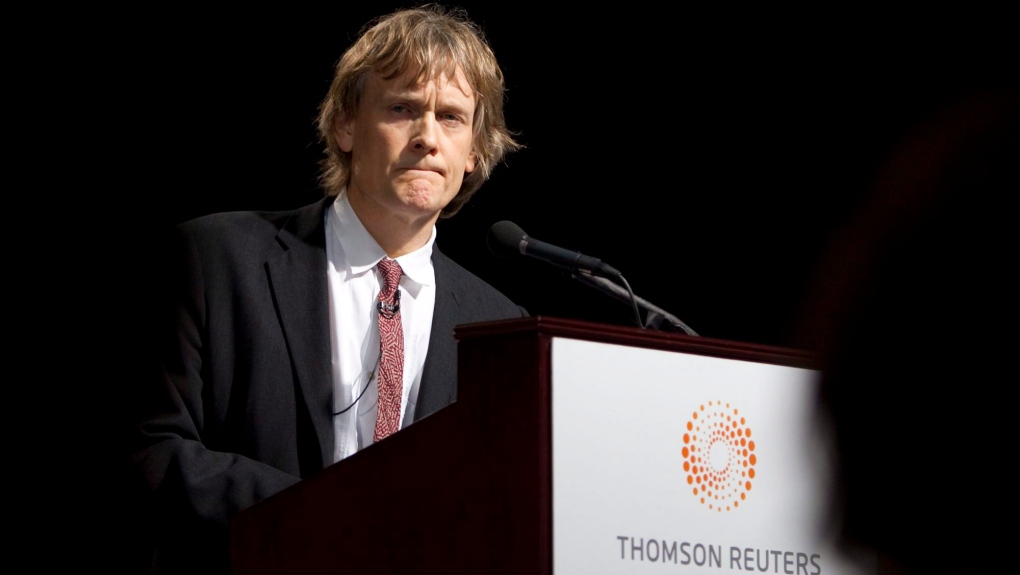 Thomson Reuters Chairman David Thomson speaks during the company's Annual Meeting of Shareholders in Toronto, May 3, 2011. THE CANADIAN PRESS/Darren Calabrese

TORONTO -- While the rest of the world added 346 billionaires in one year, Canada’s population of ultra-rich remained unchanged, according to a new global ranking of the wealthiest people.

According to the 2020 Hurun Global Rich List, Canada had 41 billionaires as of Jan. 31, 2020, the same number the country had on the same day last year.

Out of the 41 Canadian billionaires on the list, David Thomson and his family, who control a media and publishing empire, were the wealthiest with an estimated net worth of US$38 billion.

The Toronto-based family ranked 27th overall on the list of 2,816 billionaires from 71 countries.

In Canada, the Thomsons were followed by Galen Weston and his family with an estimated net worth of $8.3 billion. The Weston family, who famously own the Loblaw grocery chain and Shoppers Drug Mart stores, among other entities, came in at 235th on the list.

The third-wealthiest billionaire in Canada, according to the ranking, is Jim Pattison with an estimated net worth of $6.1 billion. The Vancouver-based business magnate and investor, who owns the Jim Pattison Group, was ranked 357th on the global rich list.

While Canada didn’t lose any billionaires this year, the country also didn’t add any, as many others did.

China and the U.S. led the ranking with the most known billionaires in the world, followed by India, Germany, and the U.K.

Rupert Hoogewerf, the report’s chairman and chief researcher, said China has more billionaires now than the U.S. and India combined.

“China, despite the trade war [with the U.S.], added 182 new faces to hit 799 billionaires, three times the number of new faces in the U.S., widening the gap with the U.S.,” he said in a press release on Wednesday.

The U.S. also saw a considerable increase from the year before, adding 59 new faces to its total of 629 billionaires.

America can also lay claim to the richest person in the world with Amazon founder, Jeff Bezos taking the top spot for the third year in a row. The world’s richest man was ranked first for having an estimated net worth of $140 billion.

Notably, his ex-wife, Mackenzie Bezos, made the list for the first time this year with an estimated net worth of $44 billion following their divorce.

Bezos was followed by the French business magnate Bernard Arnault, who is the chief executive of the luxury goods empire LVMH. He placed second on the ranking with an estimated net worth of $107 billion.

Rounding out the top three was another well-known American, Bill Gates. The Microsoft founder was given the third spot for his estimated net worth of $106 billion.