Wedding costs: How to set a realistic budget for your big day 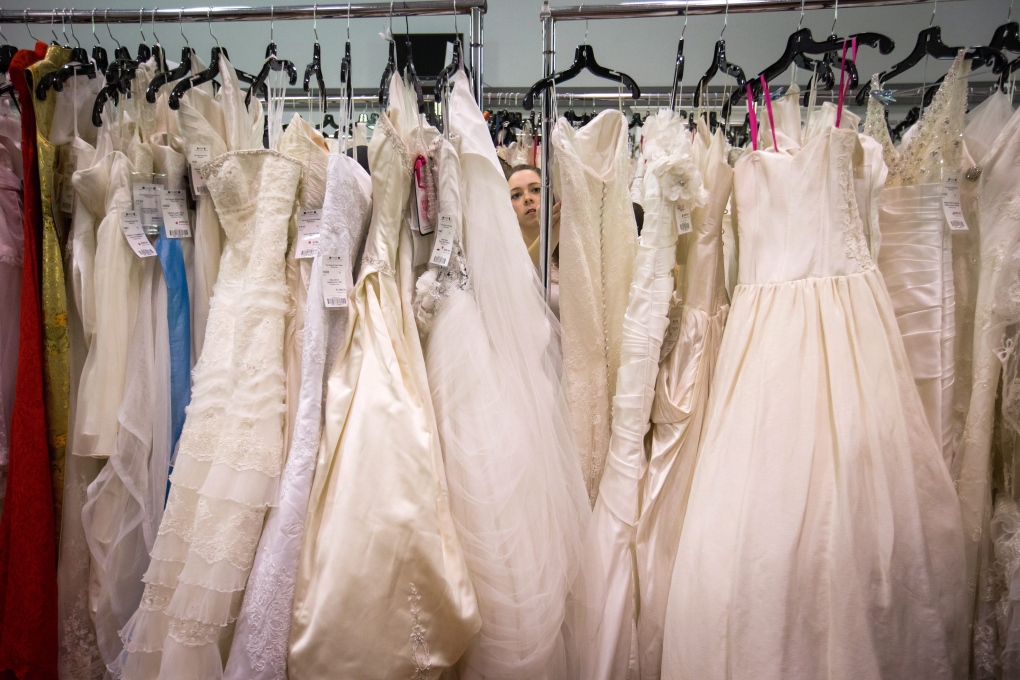 A woman looks at wedding dresses for sale at the Original Bridal Swap at the Croatian Cultural Centre in Vancouver, B.C., on Sunday April 3, 2016. (THE CANADIAN PRESS/Darryl Dyck)

Recently-engaged couple Camille Verschooris and Andrew Lounsbury knew tying the knot was expensive, but they didn't realize how pricey it could be until they found out their $30,000 budget wasn't enough to cut it for the wedding of their dreams.

"The budget got thrown out of the window quickly," said Verschooris, a 24-year-old producer's assistant.

"What we imagined was very different than what we could afford," added 29-year-old Lounsbury.

The couple was faced with a big decision: Do they scale back on the party they wanted? Or do they bite the bullet and up how much they were willing to spend?

Ultimately -- with help from their parents -- they decided to splurge on a wedding they would want to attend, complete with a guest photo booth and a $1,200 espresso bar to be rolled out at the end of the night.

For Verschooris, the greatest sticker shock was not from the big-ticket items like the wedding gown ($5,000) or the photographer (another $5,000), but it was how quickly the small expenses pushed up the bill. Having lights and sound at a wedding and bringing in the linens, china and decorations are considered extra requests -- and come with accompanying fees.

Wedding planner Rebecca Chan says one of the biggest costs for a wedding is a venue, which can eat up to half of a couple's total budget.

For example, a wedding venue in downtown Toronto can charge between $150 to $300 per person, just for the meal.

Chan recommends couples multiply that figure by the number of guests attending and getting a full cost estimate of everything they need for the venue -- from chair rentals to speakers -- for a more realistic idea of the final bill.

Then add up all the miscellaneous costs like hiring an officiant, coat check and transportation to and from the ceremony site, she said.

"These are not usually the first things you think of when you're planning your wedding," said Chan.

Couples should also make sure they budget in other costs they may be on the hook for, such as the rehearsal dinner and a brunch for family and close friends the next day.

One of the biggest things couples underestimate is how much flowers will cost, Chan said.

"Couples go on Pinterest and think they want that," she said. "What they don't realize is that costs $200 to $300 a centrepiece and when you have 10 or 15 tables at your wedding, that quickly adds up."

To keep down costs, she suggests couples think about booking their wedding during the off-season, between November to April and on a Friday or Sunday night. Doing so can save couples as much as 20 per cent compared to having a summer wedding on a Saturday night.

But the sky can be the limit when it comes to wedding costs. Chan once had a client who spent $30,000 alone on a custom-made wedding dress from designer Vera Wang.

For Verschooris and Lounsbury, they now expect their June wedding to cost around $50,000, and realize they were originally unrealistic about their expectations.

"We came up with this random number that we thought would be our budget," said Lounsbury, a camera assistant.

"If you were more aware of what things actually cost when you went in, you'd come up with a more realistic budget or a better plan of what's important and what you can trim away. That would be my biggest piece of advice."