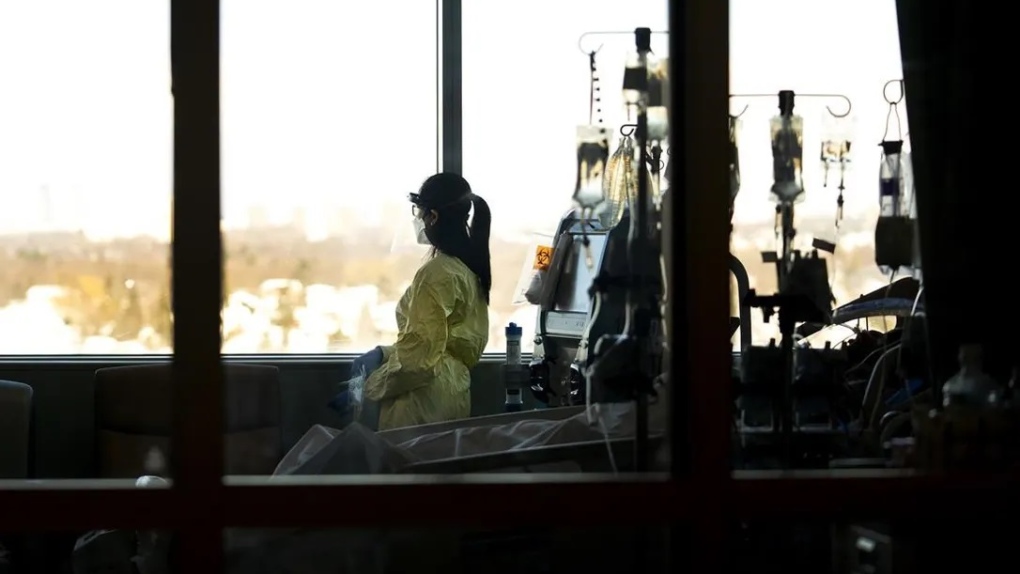 A registered nurse takes a moment to look outside while attending to a ventilated COVID-19 patient in the intensive care unit at the Humber River Hospital during the COVID-19 pandemic in Toronto on January 25, 2022. Nathan Denette / THE CANADIAN PRESS
TORONTO -

Canada is facing a wave of retirements driven by workers in high-pressure sectors, with an increasing number retiring before they turn 65.

A new analysis of labour force survey data by the Canadian Centre for Policy Alternatives (CCPA) found that 73,000 more people retired in the year ending August 2022 compared to a year earlier, a jump of 32 per cent.

Two-thirds of those excess retirements were in four industries: health care, construction, retail trade, and education and social assistance.

Senior economist David Macdonald said it's highly unusual to see retirements at this level. But a closer look at some of the industries in question paints a picture of burnout, stress and ongoing pandemic difficulties leading to workers retiring earlier than they perhaps planned.

While retirements are expected to go up gradually as baby boomers retire, 2022 is seeing a clear spike, said Macdonald.

"This is very focused on some specific areas, which ΓÇª makes it more of a short-term trend," he said.

The retirement wave began earlier in 2022, Macdonald found. By April 2022, retirements in health care in a year had almost doubled, with 19,000 excess retirements compared with a year earlier.

This likely means there's a wave of highly skilled nurses leaving the profession, perhaps due to burnout after two years of the pandemic, said Macdonald.

Retirement in teaching drove the trend in the year ending August; 21,000 of the 73,000 additional retirements were in education services.

Wage increases in Ontario's public sector have been restricted by Bill 124, which may be a factor in health care and education workers deciding they've had enough, said Macdonald.

"There's a breaking point," he said.

"Those professions have not returned to normal. They are substantially different from how they were in 2019."

In the year ending June, extra retirements in retail trade peaked with an extra 13,000 workers. In July, it was construction that saw retirements jump.

It's not just the boomer generation that's contributing to this wave, either. A surprising number of workers younger than 65 are retiring early, said Macdonald.

In August 2021, the largest age group retiring were between 65 and 69, at 38 per cent of total retirements. A year later, that group made up 33 per cent of retiring workers, while the next youngest group of workers aged 60 to 64 had gone up three percentage points to 31 per cent. Retirements among workers 55 to 59 also went up.

"People are retiring, not because they're hitting 65, they're retiring for some other reason," said Macdonald.

There was also a wave of retirements at the beginning of the pandemic, as many workers decided to retire early instead of going through unemployment, he said.

If Canada goes into a recession, something similar might happen in some sectors, such as finance or real estate, said Macdonald.

This report by The Canadian Press was first published September 30, 2022.