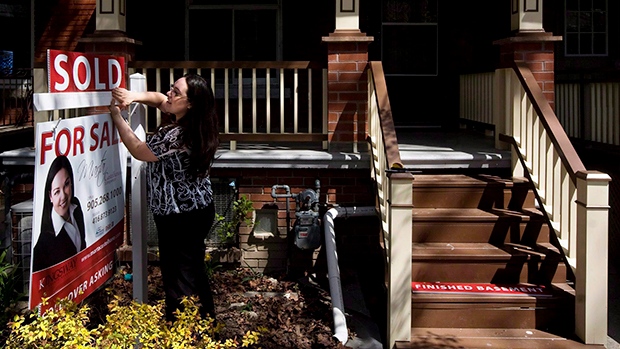 A real estate agent puts up a 'sold' sign in front of a house in Toronto. (Darren Calabrese/THE CANADIAN PRESS)

Toronto's housing market faces a "comparatively high" risk of a sudden price drop, according to a TD Economics report.

The report, issued Thursday, suggests the housing market in Canada's largest city is at risk of a steep price adjustment if supply surpasses demand.

"In light of its hotter price performance over the past 3-5 years and greater supply risk, this vulnerability appears to be comparatively high in the Toronto market," the report said.

Concerns stem from a decrease in borrowing rates in early 2015, as well as an overnight rate cut by the Bank of Canada earlier this month. In mid-July, the national institution cut the federal interest rate to 0.5 per cent, hoping to jump-start the economy. In response, the Canadian dollar plunged to its lowest rate since the recession in 2008.

The report said that even with the interest rate reduction, the bond yields that are critical in the setting of fixed mortgage rates are not expected to return to their lows earlier this year.

The report also predicted a dip in sales in Toronto and Vancouver next year due to "excessive home building."

It likened the current situation to the housing boom of the late 1980s, when investors were inspired to build by sharp home price gains. As homes were built and put on the market, supply outweighed demand and prices dropped sharply.

The largest risk is in Toronto's condo market, where a large number of units are under construction but completion has been delayed, the report said.

"Demand will remain strong over the remainder of the near term, but as affordability continues to erode, sales activity will likely cool heading into 2016."

The report also pointed out that the ratio of home price to income is steadily increasing in both Toronto and Vancouver. Though housing prices are increasing, salaries are not increasing at a similar rate.

"Current readings suggest that home prices in (Vancouver and Toronto) would need to drop by a stunning 40 per cent to bring these ratios back in line with the long-term trend," the report said.

The report calculated over-valuation, as measured by the affordability index, in Toronto and Vancouver at 10 per cent.

In order to bring on a steep housing adjustment, housing markets in Vancouver and Toronto would have to face an interest rate increase of between 1.5 and 2 percentage points, the report said. Current reports suggest the interest rate will continue to drop.

Still, the report's authors said there is only a "medium risk" of a "painful and disorderly" price adjustment.

Unless there is an "unanticipated shock emanating from outside Canada's borders," the Toronto market is not likely to face a sudden unwinding of real estate sales, TD said.

The report recommends the tapering off of prices in 2016 and 2017, which would allow household income to "catch up" to the degree of over-valuation of real estate.

"The need for careful and ongoing monitoring of these key indicators will be crucial in understanding to what extent the risk profile may be shifting."