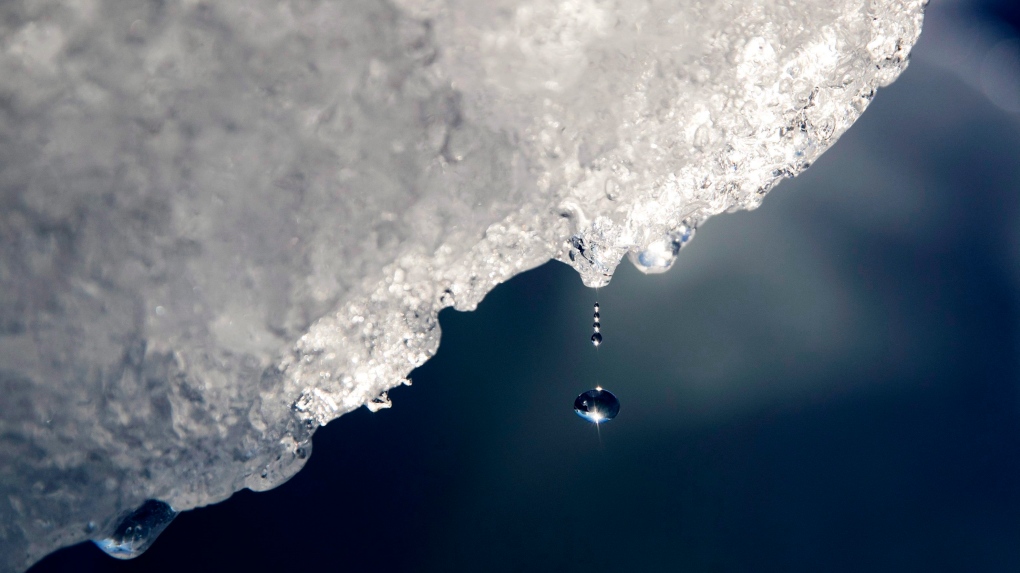 A drop of water falls off an iceberg melting in the Nuup Kangerlua Fjord in southwestern Greenland, Tuesday Aug. 1, 2017. THE CANADIAN PRESS/AP/David Goldman

ST. JOHN'S, N.L. -- The remarkable theft of about 30,000 litres of iceberg water from a vodka company warehouse in Newfoundland has bewildered the firm's owners.

Iceberg Vodka CEO David Meyers said he and his staff were shocked on Monday morning to discover one of 10 tanks of water in the company's Port Union, N.L., warehouse had been drained of its precious contents.

The thieves took off with enough water to fill a tractor trailer tanker -- equal to about 150,000 bottles of Iceberg vodka, according to Meyers.

"We're talking about a significant amount of water here," Meyers said from his Toronto office on Thursday.

"Who would want it and what would they do with it? I mean, we're scratching our head, I have to say."

Iceberg water is valued for its purity, and harvesting the product is a "dangerous and costly endeavour."

"Think about a grape harvest to make wine, you only have one crack at it a year. It's the same thing with icebergs," Meyers said.

Every year, a crew heads out on a 260-foot boat to track down icebergs of just the right size off Newfoundland's coast. There's only a short window in late spring for the iceberg harvest.

Meyers said it's at least fortunate the theft happened in winter instead of the fall, so some of the losses can be made up in this year's harvest.

But he said the company is hoping for answers to prevent future thefts.

The other companies in the province licensed to harvest iceberg water -- producing cosmetics, bottled water and beer for a St. John's brewery -- use significantly less water than Iceberg Vodka, and Meyers said his company is friendly with the other businesses.

The crime itself would have been a complicated endeavour and it suggests the thief was familiar with the facility.

Those responsible would need access to the building and know just the right gear to pull off the heist.

"It's upsetting for us, that's for sure," Meyers said.

"I've never even considered the possibility of somebody stealing our water ... I guess we live in an interesting world."

Police believe the theft occurred between Friday and Monday, and have asked anyone with information to contact Bonavista RCMP or Crime Stoppers.